The box is roughly a quarter the size of a shoebox. It’s well constructed of thick cardboard; inside are roughly 20 motley objects. Not often, perhaps once every year or two, I take the articles out of the box, and maybe half as often I add something.

There’s a roll of undeveloped film. There’s a ribbon. There’s a little blue boxing glove, perhaps two inches long, which my father gave to me, I don’t know why, when I was about nine, and holding it immediately brings me back to his dinner jackets and ties, the smells of coffee and scotch. There’s my pack of playing cards from prison, the backs of the jokers worn and scratched from being slapped on the dayroom’s metal table in countless games of spades. There’s the knotted tassel from my college graduation cap. There’s a Mercedes ornament I pulled from a hood in post-grunge Seattle in maybe 1995 when all our idols were dead or dying. The friends I was skateboarding with then are lost to me now—still in the world but all of them strangers. Ridiculously, in another life and another place I had that same hood ornament on a chain around my neck the first time I kissed the girl who would many years later be the woman reading in the other room as I write this.

When I die, one of my children, or a stranger, will open this small box and pull their finger through these things—a bolt from a bridge, a few packs of matches, a glass cigar cylinder full of sand—looking for rings or coins. But there’s nothing valuable in here. The moments these objects recall for me probably wouldn’t even be recognized in them now by someone who was with me then.

And even further: There are some things in here that I can’t remember where they came from or what they are supposed to signify. What is this champagne cork? At some point some me felt strongly enough about the memory evoked by it to put it among the few objects in this keepsake box, but that memory is gone, so it’s just garbage now, just a cork again. But I still can’t throw it away, since I know that it does mean something to me, just not what, and though I’ll never get what it means back, it still has to be important that it once was part of what happened to me, right?

More from our “In Praise Of” Series: 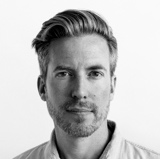 CJ Evans is the author of Lives, selected by Victoria Chang for the Kathryn A. Morton Prize from Sarabande Books, A Penance (New Issues Press) and a chapbook, The Category of Outcast, selected by Terrance Hayes for a Poetry Society of America chapbook fellowship. A past recipient of the Amy Lowell Poetry Traveling Scholarship, he currently lives in the Bay Area and is the editor in chief of Two Lines Press, a publisher of international literature n translation.