(VIDA is an intersectional feminist literary organization. Every year they conduct the VIDA Count which tallies the gender breakdown of major literary publications and book reviews.)

you’ve asked me to write a love letter to an ordinary object. there’s no task I will fail at more than a love letter. but, I love my VIDA t-shirt. I love the brightness of the blue, how the cotton is soft and long over my hips so I can wear it with yoga pants which aren’t really pants or enough pants. I know this but wear them anyways. I love that someone is counting. I want us to count. I want us to be known on scale and on mass. but I also want the smallness, the little moments between us, I want us to not count, I mean, I want us to see the ways we are only ever half accounted for. in the general: yes. in the specific: no. this whole gender fluid thing could be good. it complicates the impulse to say something like: I don’t like men. in the general: no. in the specific: yes. the carnal for example, I like that. endless conversations where I listen and affirm, I’m over it. yet married. which I’m over as well. nothing has gender-normed me as much as marriage. more so even than carrying a baby for nine months and nursing her in public for three years. asked to write about love, I think of divorce. it’s early. it’s the middle of the night. I’m done with the count. the counting. I don’t need any more data. I’ve got laundry and that spot on the kitchen floor I keep washing since splattering apricot sauce across the linoleum. have you ever seen Pyrex break? it’s glass under pressure. which makes it strong. which makes it almost never break. but when it does, it’s glass under pressure, remember? it explodes. I don’t know why it’s called VIDA maybe as a bloodline, a record, a way of being alive. I don’t wear my VIDA t-shirt to clean the house. I don’t wear it to work either. it’s good for going out but not that far. which is the line I’m walking, counting in bright blue, stretching the hem over my thighs. my next letter will be about pants, hips mostly. the drop from bust to waist, waist to hips. I wish I could say it will be a love letter but you know me better than that.

More from our “In Praise Of” series: 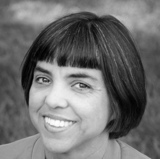 Judy Halebsky’s most recent book, Spring and a Thousand Years (Unabridged), was a finalist for the National Poetry Series and the Miller Williams Prize. Currently, she is translating Wago Ryoichi’s post-Fukushima ecopoetry. She directs the Low-Res MFA at Dominican University of California and lives in Oakland.