There was a time when the surest sign of my affection was a mixtape: laboriously recorded with a plastic old-school cassette player, meticulously hand-labelled with each song and artist, and then given away with love to friends and crushes. These handmade gifts took hours to assemble, a perfect project for a rainy Sunday afternoon or a snowy weekend. Each finished product was truly an objet d’art, with lovingly handcrafted covers consisting of magazine cutout collages, hand-drawn comics, or black-and-white doodles and speech bubbles.

My family had moved often during my childhood, so these mixtapes were also part of a zealous correspondence with distant friends across college towns in Ohio. Every couple of months, lengthy diary-like missives on handmade stationary would arrive in my mailbox, with stuffed envelopes that tested the upper limits of the 25-cent stamp. And every now and then, an even larger, thicker envelope arrived, this time padded for the safety of its precious contents: a mixtape. Over the years, my far-off friends set our correspondence to homemade soundtracks that opened my world to bands like The Sugarcubes and Public Enemy while my peers in northwestern Pennsylvania were rocking out to Bon Jovi or dancing to New Kids on the Block.

I painstakingly dubbed most songs from original cassettes with a dual tape deck, complete with the ambient click I tried so hard to avoid, holding and then releasing the “record” and “play” buttons just so. Still, sometimes there was no avoiding audible and jarring clicks and clacks. Especially when I wanted—no, needed—a song from an album I didn’t own, and therefore attempted to record a clean version from the radio. These recordings were inevitably clunky, with the awkward drop-in or cut-off meant to omit the DJ announcing the song as the track began to play or wind down.

Despite the clickiness and clunkiness, I felt a certain possibility and excitement at the start of each mixtape creation. The choices seemed endless as I considered the musical buffet that could comprise the feast. I relished choosing the songs and sequences that I thought my beloveds would find most delicious. Because I was fond of dubbing something like Pachelbel’s Canon up against a song by Fugazi, the resulting mixes may have surprised some recipients like an unexpected mixture of flavors, colors, and smells all arranged carefully on one plate.

But I loved the contrast and juxtaposition of tones and moods, and the new weird space that was created in-between. Looking back, I see that my makeshift recording sessions were early experiences in learning to navigate the notion of audience that we so frequently discuss in the poetry workshops that I teach now. Sitting on my worn bedroom carpet, surrounded by cassette tapes loosed from their scratched and cracked plastic cases, what did I want my mixtape recipient to feel, to know, and to think? What kind of journey did I envision for my beloved listener, and how would I orchestrate that?

I certainly didn’t frame my efforts in those terms, but—depending on the recipient—I probably wanted the listener to feel the infectious joy of my favorite Replacements tune with its bouncing guitar riffs; to know that the songs included in the mix were meant to surprise and would vary wildly, ranging from The Smiths to Cat Stevens to Vivaldi; and, probably, to think I was really cool for including the best B-side by The Cure. In the end, however, the mixtapes I crafted were less about showing off my musical tastes, and more about considering what might thrill, delight, or soothe the beloved recipient, with each song an invitation to rock out, or to tear up, or to meditate, perhaps, on the color of the sky.

More from our “In Praise Of” series: 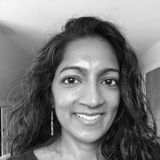 Dilruba Ahmed is the author of Bring Now the Angels (Pitt Poetry Series, 2020), with poems featured in New York Times Magazine, The Slowdown, and Poetry Unbound with Pádraig Ó Tuama. Her debut book of poetry, Dhaka Dust (Graywolf Press), won the Bakeless Prize. Her poems have appeared in Kenyon Review, New England Review, and Ploughshares. Her poems have also been anthologized in The Best American Poetry 2019 (Scribner), Halal If You Hear Me (Haymarket Books), Literature: The Human Experience (Bedford/St. Martin’s) and elsewhere. Ahmed is the recipient of The Florida Review’s Editors’ Award, a Dorothy Sargent Rosenberg Memorial Prize, and the Katharine Bakeless Nason Fellowship in Poetry awarded by the Bread Loaf Writers Conference. She teaches with Chatham University’s MFA Program and Hugo House in Seattle. Ahmed joined the faculty at Warren Wilson College’s MFA Program for Writers in January 2021. Web: www.dilrubaahmed.com