Toward Monterosso, the northenmost village in the string of five, the picturesque coastal cliff path winds past a dome-like concrete Nazi gunner bunker, its solidity itself a tyrannical statement. My teeth hurt just looking at it. Perforating the front half of the dome, ominous slats through which soldiers could fire at oncoming threats, I guess from the sea. We braved the steep descent along a rocky, compromised staircase as wonky and uneven as a stack of books piled higher than is tenable. I don’t know what I thought I’d see, or why I cared to, except the structure seemed to insist on my curiosity and repulsion. When close enough to the dome and its slats to peek inside, and when I did, what I saw was the emptiness of history. The floor was covered with what even spiders had abandoned, and straw-like remnants of a cliff bird’s nest inside the “pillbox,” as they are called by military types. I could smell the heat-baked shit of what once lived there—the anti-shrine—I assume not long before. A spidery shock of green agave leaves that extended from a crevice of two stone protuberances that had, over longer than was imaginable, puckered into each other just below the façade of the structure, below that emptiness of history overlooking the sea, relieved my dread. I climbed back to the contrast of brightly painted footstones on the main path above, where Jess on the path was staring through a gridded chain-link sort of fence adorned with colorful locks like the ones on that bridge in Paris I heard they tore down for fear of it collapsing from the weight of loving symbols. I remember Jess and I touched those, too, the cold red metal of one, the aquamarine plastic-coated other one, heart-shaped, of course. Together, pausing for a breather, we studied the beach, within view, emanating with blue and white and yellow umbrellas in full-on sun, several hundred people, some naked, and a line of bikes and prams bottlenecking near the central market entrance, and the sand very flat and very nicely colored in the place in which setting, all of it, rebuked the irremovable dome on the cliff. Later in the evening, my mother called and told me one kid from her childhood neighborhood claimed that his uncle, who remained in Italy, was one of the people who’d gleefully pissed on Mussolini’s corpse, and how after the locals lit candles for their unaccounted-for to find them by, which I think is quite sweet. When I asked why her grandmother never went back to Italy, Mom told me she told her in a now-dead dialect it was poor when I left. I hear it’s resort-like now, and exclusive, and beautiful; they call their chicory dandelions and blend them in salads.

More from our “In Praise Of” Series: 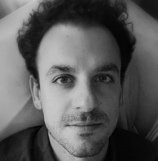 Brian Tierney is the author of Rise and Float, winner of The Jake Adam York Prize (Milkweed Editions). A former Stegner Fellow at Stanford University, and winner of the Poetry Society of America’s 2018 George Bogin Memorial Award, his work has appeared or is forthcoming in Paris Review, Kenyon Review, NER, AGNI, Poets.org and others. He lives in Oakland, and teaches poetry at The Writing Salon.