Back to Issue Thirty-Four

Like many of us, I am overwhelmed by the news, social media, and the constant what next. But now, more than ever, art teaches me one of the best ways to stay engaged is to question everything. The stories and poems in the 34th issue of The Adroit Journal challenge systems of hegemony, family relationships, and they even challenge death itself.  Reading and sitting with these pieces for the past couple of months have reinvigorated my sense of self in a troubled world.

Take, for example, Megan Denton Ray’s “Setting Lemon Curd,” in which she asks “is my hunger not made / by God?” We are asked to reconsider autonomy, what’s sacred. A number of the poems in this issue reckon with faith. Thomas Dooley illustrates the ramifications of harmful religious practices in “Conversion Therapy.” Gerardo Azpiri Iglesias invokes Lot’s wife to contend with sin in “Peach Vodka in Sodom.” Jen Levitt’s poem “Go Inward” returns to temple and finds a new kind of hope amongst strangers.

These poems also find solace in the liminal space between here and after. In Kevin Prufer’s “A Dog Barking Into The Night” we follow the speaker as they grapple with the slow loss of a father who went from “a man, a human being” to “a dying animal body.” In Jordan Keller-Martinez’s “Before, You Could Go To The Hospital and See Him” we are shown the moments leading up to a suicide. The speaker says, “We’re supposed to stay alive now that he’s not,” and under that compulsion, these poems trudge forward with no easy answers, just an aching desire to know.

I return to 2020 Adroit Prose Prize winner Yasmeen Khan’s story “Valley of Saints.” The story is unflinching in its account of a grandmother whose life has been beset with death in Kashmir and America. The speaker and her grandmother watch mothers screaming in the middle of the road because of disappeared boys, “killer whales rot[ting] in tiny pools,” “slides of sooty, starving children cut to candy-bright ads,” while remaining “silent under the orange wash of the TV screen.” I am most struck by how her reflection implicates the reader and asks us to consider how we casually interact with violence in the media and our own histories.

Likewise, in Aimee Nezhukumatathil’s “Flamingo,” Nezhukumatatil draws parallels between young women and the dancing pink birds, and like Khan, asks us what acts of violence do we tolerate as a society?

But it would be remiss of me to not acknowledge the moments of delight across the issue. In Yalie Kamara’s poem “Besaydoo,” teenage boys’ handshakes pop “like the first, fat, firecrackers of summer.” In Dorianne Laux’s “Midnight is a Beautiful Curse,” “The moon is a silver spoon sunk / in the galaxy’s cold soup.” The photos from Jocelyn Cooley’s “Melanocytes” overlap and stitch images of bodies, name tags, paint, and Time Magazine verbiage to depict the beauty and resilience of African Americans.

Special to this issue are the stunning prose and poetry of finalists and winners of The Adroit Prizes. Judge Jericho Brown awarded the 2020 Adroit Prize for Poetry to Tariq Thompson’s “On Their Birthday, Suge Knight & My Daddy Discuss Forgiveness,” and selected Stephanie Chang as runner up. Judge Kristen Arnett awarded the 2020 Adroit Prize for Prose to Yasmeen Khan’s “Valley of Saints,” and selected Coral Bello-Martinez as runner up. Also featured are the brilliant and urgent works of the high school and college students who were finalists for the Adroit Prizes.

Readers, there is so much more I could say about the work featured in our summer issue. Please dive in for yourself, and prepare to be challenged, delighted, and moved. 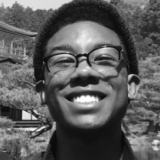 Michael Frazier is a poet and educator. He graduated from NYU, where he was the 2017 poet commencement speaker and a co-champion of CUPSI. He’s performed at Nuyorican Poets Café, Lincoln Center, and Gallatin Arts Festival, among other venues. His poems appear, or are forthcoming, in Tokyo Poetry Journal, COUNTERCLOCK, Construction, Visible Poetry Project, Day One, and elsewhere. His writing has been supported by Callaloo and a Brooklyn Poets Fellowship. Currently, he is a staff reader for The Adroit Journal and a 2020 Seventh Wave Editorial Resident. He lives in central Japan where he’s working on a poetry collection about his mother. He can talk for days about anime, poetry, and how Christ has changed his life. Follow on Twita @fraziermichael