No Ruined Stone, Shara McCallum’s recent narrative verse collection, asks us to look squarely at the “Faustian bargain” the colonizer struck in the West Indies, the five-hundred-year-old Transatlantic slave trade, and the ruins of history we inherit as a result.

McCallum extends a conceit of ruin and devastation through a brilliantly invented historical narrative where the effects of slavery and colonialism remain painfully palpable generation after generation. At the start, we find ourselves in seventeenth-century Jamaica under British rule, and in sixty-some pages we are catapulted into early nineteenth-century Scotland as the abolition movement is gaining momentum. Yet the truth remains unrelenting throughout—slavery spared none, perhaps even less so the colonizer himself. Of “men born of colony,” the speaker says,

wretchedness
is fast imprinted on them, their souls
shrunken by the whip, which seldom fails
to destroy not only those forced
to yield to it, but all who wield it.

In a narrative informed by thorough research into the life of the Scottish poet, Robert Burns, and her travels to Scotland and Jamaica, McCallum weaves a fictive alternate history, as though it were no longer sufficient to merely remember the past. The story is deftly framed and held together by a warp of historical facts, such as when and how the Scottish poet, destitute and fleeing from clandestine relationships, actually purchased a ticket in 1786 to board the Bell for Jamaica to partake in the lucrative slave trade. And the imagined weft, the “what if”s are woven seamlessly into the narrative: what if he had actually undertaken that deadly journey and survived? What if in his role as an overseer, he had fallen in love with an enslaved woman at the plantation, Springbank? What if there had been a child? And what inevitably would have happened to that girl-child? McCallum does not stop there; she cogently carries the tale through three generations where Robert Burns’s daughter is raped by Douglas, the plantation owner, and his fictional granddaughter, Isabella, a mulatto slave woman conceived in rape and miscegenation, and carrying scars of slavery, is now an immigrant walking the streets of nineteenth-century Edinburgh, “passing” for white.

The force of this collection lies in its ability to graciously share painful truths—burdens inherited by the descendants of enslaved Africans, and the strong tide of societal erasure, the fierce momentum sustained through generations to bury the facts, though they continuously demand to be reckoned with. “I was simply evidence. I needed to be erased,” Isabella understands as an adult—but as a child whiteness is the lie she wears close as skin; invisibility shields her in the blind world that refuses to see the messy complication of her,

…I grew
so comfortable in the lies, in the lying
I could believe the sound of my own voice
and memory began to give way
bit by bit to fiction.

To lie is the survival mechanism of the child-immigrant. Seemingly innocuous acts, such as the effort to “lose” an accent, inadvertently denies one culture and affirms another. This is geopolitics, struggle for power operating at the microlevel, in homes, often encouraged by the careful and eager-to-assimilate immigrant parent. We witness this trauma in McCallum’s verse novella as Miss Nancy, Isabella’s grandmother (who in 1825 Edinburgh is passed off as her granddaughter’s servant—a horror hard to fathom!), keeps the past locked away and encourages Isabella to “morph” into a white woman. She teaches Isabella “to fear the sea / she crossed first as a girl” as she relives the nightmare of the Middle Passage every night. The tragedy of this situation is not lost on the reader. After her death in 1825, Nancy continues to haunt the collection. The dead demand justice and, spurred by the abolitionist movement, Isabella begins to shed herself of the colonizer’s lies. In the title poem, “No Ruined Stone,” which is one of the few poems not in personae, we hear the poet and her lyrical voice:

When the dead return
they will come to you in dream
and in waking, will be the bird
knocking, knocking against glass, seeking
a way in, will masquerade
as the wind, its voice made audible
by the tongues of leaves, greedily
lapping, as the waves’ self-made fugue
is a turning and returning, the dead
will not then nor ever again
desert you, their unrest
will be the coat cloaking you…

In the second part of the collection, persona poems in the voice of Isabella carry us through her journey to reclaim herself from “carrion history.” She begins a thorough investigation, and here the heroine mirrors the poet going through the archives of Robert Burns for traces of Nancy, of her mother Agnes, who died in childbirth. And of course, in righteous indignation Isabella condemns her grandfather for his silence, for his collusion with upholders of the evil that is slavery. She finds no mention in recorded history of the love affair that saved Burns from himself, from the nightmare of life on the plantation, Springbank. Addressing Burns, Isabella says, “…at the end, / there was only Nancy, hers the breath / grazing your neck, hers the arms / laying you down,” and she commands the Bard of Scotland, the historic figure of Burns to respond: “This is the debt, the one / you could have paid, I want rendered.” And so, with elegant, discreet verse McCallum exposes Burns for his blind spot, if not hypocrisy, in professing his profuse empathy for the little mouse whose house he ruins in his universally beloved poem, “To a Mouse.” Here are the final lines from McCallum’s “To a Mouse,” which borrows only its title from Burns. Reproaching her grandfather, Isabella asks why he who,

glimpsed divinity
in the smallest of creatures,
lit the animal soul, spoke,
nothing of her [Nancy’s] suffering?

And indeed, according to McCallum, there seems to be no recorded evidence that Burns actively advocated an end to the slave trade at any point during his short life.

The splendid feat of this novella in verse is partly owed to the virtuoso craft of the poet. Small details here show mastery, such as the elevated choice of diction and rhythm in the voice of Burns and the almost colloquial tone animating the disturbing character of Douglas. But I believe the collection owes its wonderful cohesiveness, the true and honest note it sounds, to its very source of inspiration. As the drama unfolds, we sense the author-poet addressing her own white ancestry, as if out of a desire to hold it accountable for the wreckage she has inherited. McCallum’s own history and heritage are complex—a Black woman inhabiting a white body crossing cultures and borders. In the essay, “Through a Glass, Darkly,” which appeared in the autumn 2020 issue of The Southern Review, she offers a window into the world and influences that shaped her, and how she has grappled with a world which still refuses to see her.

McCallum teaches us history is ours to resurrect, converse with, and align as near to the truth as best we can. How telling that a fictive history can ring so true! This is a collection where not only the poems, but the timeline, the Dramatis Personae, the author’s notes, and the acknowledgements all call on us to attend, each a part of the intricate narrative, each contributing to the awe we experience at what McCallum has accomplished here in sixty-some pages. 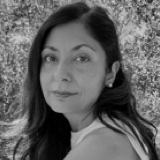 Rooja Mohassessy is an Iranian-born poet and educator living in Northern California. Her poems have appeared or are forthcoming in Narrative Magazine, Poet Lore, RHINO Poetry, Southern Humanities Review, CALYX Journal, Ninth Letter, Bare Life Review, Potomac Review, The Florida Review, New Letters, InterlitQ, and elsewhere. She is also included in California Fire and Water: An Anthology of Poems. Rooja is a 2021 recipient of the MacDowell Fellowship and a student at the MFA program of Pacific University, Oregon. She reads for the journal Prairie Schooner.