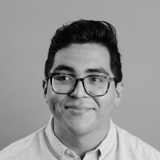 Austin Araujo is a writer from northwest Arkansas. He earned an MFA at Indiana University where he was awarded an Academy of American Poets Prize. His poems have appeared in Missouri Review, Shenandoah, Memorious, Four Way Review, and The Rumpus, among others. He is currently a Wallace Stegner Fellow in Poetry at Stanford University.

Austin Araujo: How I Wrote “Someone is the Water”