By now the world is full of ecopoetry, but poets of Hila Ratzabi’s caliber don’t turn up often. Her new collection, There Are Still Woods, explores the urgency of climate change and all the environmental imbalances of the Anthropocene.

Ratzabi positions herself as an observer, especially as a listener, in the space where individual consciousness gives way to a sensing of life in all its forms. These poems are the product of deep thought and skilled crafting, and especially of profound feeling. The threshold between intellect and instinct is the place where Ratzabi makes her insights. The interface is often imagined as an act of breathing or of taking in: “The animal peers out of my throat / A raven pecking at snow.” This liminality is where who encounters what and, in doing so, becomes it: “Waves fall / like the word what–– / What what / is happening / to me?”

Ratzabi’s communication with the nonhuman world brings her heartbreakingly close to the creatures she finds and befriends. One of the book’s most touching poems, “Goat,” chronicles her visit to a breeder. The poem opens with a friendly stampede of goats, named alphabetically by generation: “the kids that rush to greet me are the Fs.” Following the exuberant young ones comes Eon, distinguishable by his one horn.

“I look into one of his eyes and it’s washed / with a light green kindness so pure I’m broken open.” Immediately we love Eon and want somehow to return his kindness. But his horn stands in the way. The breeder explains, “We burned off the first, / and the other we couldn’t get right.” The horn presents a risk of aggression, so because of the breeder’s mistake, Eon is destined to end up as someone’s dinner. Oblivious, the goat leans against a scratching hand “in an unbroken angle of bliss.” Eon becomes a standard bearer for one of the book’s themes: that the natural world suffers for the repeated human errors that gave us the present environmental crisis, dooming so many animals.

The poet as observer, the listening self, harkens back to the actual creatures of earth, but also to those of mythology, from existing traditions and from her own exploration. From Inuit tradition she discovers Sila, god of sky, air, and wind; and Sedna, fearsome goddess of the sea and its dreaded underworld. Ratzabi writes of Sedna with undisguised tenderness, a gentle feminism touched with humor: “The men fashioned their bitch goddess into a fat girl.” In “Sedna in Space,” the sea goddess finds herself orbiting Pluto (one of its satellites is named for her)––and the poet offers her a blanket to keep her warm.

Ratzabi’s personal mythology produces some of the most compelling work in this collection. The section called “How to Tame the Hurricane” envisions its poems through the lens of mysticism. In “The Spirits Arrive” and “Initiation,” we meet beings who can’t be summoned but who announce themselves when their time is right, and leave indelible footprints: “They spliced the spell to my body, / Filled my eyes with fire, my throat with ice, / Then they left the door swinging open in the rain.” This astonishing analogy illustrates what happens in the wake of environmental awareness. The rewards of accepting oneself as part of nature come with the consciousness of terrifying vulnerability.

“Initiation,” the last poem in this section, begins with images from deep inside a trance: “Blue house dropped out of the sky / Sculpture of a giant fish jumping from snow.” This hypnotic state opens the portal that lets in the spirits. A few lines later the poet asks, “How many mountains must God hang over our heads / before we can read the Torah of sky?” The Torah, the first five books of the Hebrew bible, includes Genesis, the account of how the world came into being, but also Leviticus, the code of behavior for an observant Jewish life. What is the Torah of sky? Is it the call sent out by an environment desperate for survival, a system of signals that shows humanity how to alter its behavior before we reach the point of no return?

As “Initiation” shows, God has a place in these poems, but on the poet’s terms: “how I talk to God from my stomach” makes it clear that this God doesn’t stand in opposition to nature, but at its center. A mother caring for her child with a cold realizes she has “accidentally made a prayer” of their bodies as she holds him in her lap, remembering a time when she tried to contain God in a mere name.

Ratzabi handles apocalypse with a deft ear for terror. In “Crossing the Tappan Zee Bridge before the End of the World,” she invokes unsurvivable extremes of misplacement: “Before the bolts explode like broken elbows / Before the wind sinks into the sizzling sea / Before the sun looks us straight in the eye.” Even as the world folds, the speaker frets over missing keys and too much junk in her purse––a metaphor for how our species ignores crisis until it feeds off itself and grows too huge to stop. But as she drives through the “tilting” afternoon, she realizes how little time is left. Her race to get home to her safe house and beloved partner feels like an endgame––“My love, waiting in the quietest room of the house.” Quiet and warm, but for how much longer?

Such imagery begs the question of a post-apocalyptic future. On the page facing “Crossing the Tappan Zee Bridge,” “Goodnight Earth” imagines life on our planet after the end of humanity. Imagery worthy of science fiction reveals “beetles with airplane wings, / built-in GPS” and “hatched chicks, new eyes / all over their fur.” The mind reels envisioning these bird-mammal hybrids covered with eyes. Insects with a built-in GPS call to mind a known artifact of the Anthropocene: compound minerals with plastic as one of their components.

Hila Ratzabi has an urgent message for her fellow humans, and it comes through loud and clear. Fully conscious of the damage wrought by our species, we must devise a way to repair it before the hurricane sweeps us all away. 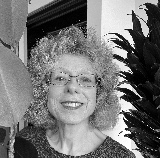 Anne-Adele Wight is the author of four books of poetry. Her work has been published internationally in print and online. She lives and writes in Philadelphia.