Miguel’s neighborhood is going downhill. His uncle Ramón has decided to live in the small compartment behind the local Coca-Cola billboard. “From the height the billboard gave him—ten meters—everything proved simple and clear,” 12-year-old Miguel narrates. “So, he wouldn’t come down.” The housing complex next door lights up with gossip about the move, for all the residents do is work, watch TV, sleep, and gaze out their windows at “the view they once had of the sun sinking between the hills, a view hidden by the billboards years ago.” Where others see a madman and a menace, Miguel sees a man courageously staking out his own quirky, offbeat life. The move, however, will culminate in a climax as fiery as it is inevitable.

How to Turn Into a Bird, translated from Spanish by Elizabeth Bryer, is María José Ferrada’s second novel. A more literal title might have read How to Turn Into the Problem since that’s exactly what Ramón does. Ferrada depicts a community so dominated by herd mentality that even the slightest deviance seems like a threat. At only 12 years old, Miguel has lived “long enough to realize that logic wasn’t of much concern to many people around here. Least of all to Ramón.” Miguel’s confusing world comes to embody the ills and anxieties of communities victim to political groupthink in Latin America, and beyond. Ferrada’s dreamy, unrivaled storytelling conjures up a vividly lived-in, beat-up world where those who defy the group must live by their wits and those who don’t must endure a life of tedious complacency.

“OPEN HAPPINESS,” reads Ramón’s Coca-Cola billboard. If only it were that easy. A critique of global capitalism breathes life into the story, but it’s hard to ascertain in which direction the critique is going. Is the community a bunch of industrialized automatons going through the motions of life and Ramón the only individual among them? Or is Ramón the sell-out, maintaining and living in the shadow of a billboard making a promise the Coca-Cola corporation can’t keep? Are they all victims of the same economic injustice that forces such mundane, laborious lives to be led? Does capitalism operate by the commands of a cut-off coterie of one-percenters, or is it like the weather, beyond anyone’s control? These ambiguities, rather than sapping the novel’s strength, enliven its themes. Remember that Miguel is a child narrator and thus inherently unable to diagnose modern capitalism’s diseased miasma. The reader encounters his story of groupthink and economic depression as a parent hears their child relating a brawl at recess: the parent gets disparate images and details, but the whole story must be assembled from these incomplete parts. That Ferrada saddles herself with that narrative handicap and still weaves a gracious, graceful, grace-filled yarn is no small marvel.

Near the housing complex, there flows a canal. Along the canal live the “homeless.” “Maybe at that point I should have noticed,” Miguel contemplates, “the way Ramón and the homeless were starting to share the same galaxy, known as ‘the problem,’ but I didn’t.” Although the homeless and the housing complex share a common foe in consumer capitalism, How to Turn Into a Bird demonstrates that the systems of inequality that are so alive in the text are as divisive as they are unbreakable. “Because the thing is,” Miguel says of his family, “there was a time when we were the homeless.” Rather than a greater empathy, their past inspires only a fiercer hatred for what they once were. Coalitions that could struggle together for economic justice implode under the pressures of survival in a capitalist economy. Ferrada’s fatalist verdict on the impossibility of such campaigns packs the punch of Greek drama, the fates of her characters as predestined as those of Oedipus or Antigone.

For such a slender novel, How to Turn Into a Bird contains an impressively broad dramatis personae. When he can craft a good excuse, Miguel escapes his abusive mother for the welcoming arms of his uncle Ramón. Ramón’s kooky observations and sage insights lend an unexpected depth to the novel’s breezy pace. Paulina, Miguel’s aunt and Ramón’s once-partner, bravely asserts Ramón’s “right to live however he wanted.” Miguel lives with his violent, rage-filled mother, “tired of dealing with the distance between the image she has of herself and the one the rest of us have of her.” Finally, there is the housing complex. It functions almost as a brain: each resident is a neuron, the walls between them synapses, and gossip the electricity running between them. The ramshackle building was constructed so hastily that neighbors can have entire conversations through the walls and floors. That’s how news spreads about Ramón, alongside the plans they concoct to get rid of him.

Miguel’s outlook on families is predictably bleak. He spends so much time with Paulina and Ramón that neighborhood kids from the complex to the canal mistake them for his mother and father. His opinion on the value of family can be gleaned from a passage that also demonstrates his colorful imagination and artistic sensibility:

Family. Around that time, I decided that this would be the title of the movie I would make one day. It would end with all the characters passing out beneath a table after drinking a thick, sugary liquid. My camera would focus on the label of the bottle, which would read, LOVE. The end.

Need it be said that the thick, sugary liquid is Coca-Cola?

Miguel is a precociously wise narrator. At times, he seems too wise for a 12 year old. By his own admittance, he “wasn’t a model student,” but was “a good model of a typical student.” Ferrada, however, places immense faith in the child’s capacity for silent observation. “She had anchored Ramón to the earth from that very first day,” he says, referring to Paulina, “and he, who loved her back, had let himself be anchored.” Such insight seems unlikely from a narrator so young, but then again, to paraphrase what Alfred Kazin said about James Baldwin, the famed American writer forced from a young age to confront racism and poverty head-on, Miguel is forced to understand so much.

From a most unlikely premise, How to Turn Into a Bird builds toward an explosive, fully earned climax. After both vocally mocking and silently judging Ramón, the housing complex’s residents elect to take extreme measures to eradicate their “problem.” “The history of humankind demonstrates,” Miguel proclaims, “that the people heading and closing that list—the ones who laugh, the ones who remain silent—turn out to be the most dangerous.” The ending doesn’t so much resolve the novel’s drama as deepen it, deconstruct it, dismember it. The reader will ponder the fates of Miguel and Ramón long after the last page is read. How to Turn Into a Bird is not just a delight for the senses but an exercise of the imagination.

With her previous book, How to Order the Universe, which earned “Best Book of the Year” plaudits from the San Francisco Chronicle and World Literature Today, Ferrada proved herself an incisive, magisterial voice ready to tackle themes of the utmost intimacy—love, childhood, parenting—and of the largest consequence—political extremism, class warfare, economic injustice. How to Turn Into a Bird expands on these themes, enlarging and enriching them. Where How to Order the Universe had a clear antagonist—Pinochet—the characters of How to Turn Into a Bird must contend with the invisible forces that define the modern world, namely global capitalism. Drawing such an intimate portrait of themes so weighty requires deftness almost beyond measure, but Ferrada has it in spades. One can only dream of the book she’ll conjure next. Here is a master storyteller. 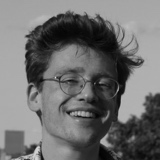 Michael McCarthy’s work has appeared in Cleaver, Beyond Queer Words, and Prairie Schooner, among others. His debut chapbook Steve: An Unexpected Gift is forthcoming from the Moonstone Arts center in early 2023. Originally from Massachusetts, he is currently a student at University of Carlos III in Madrid, Spain. He can be reached via Instagram @michaelmccarthy8026.

0
Michael McCarthy January 6, 2023
No Comments Yet