Jordan Castro’s debut novel places us in the writer’s consciousness so that we can experience the mundane with the galaxy-brained, his slow apartment rituals as well as his rapid, extravagant ruminations. The story is a morning ostensibly spent working on a novel, but really spent on Twitter, Instagram, Facebook, and YouTube, by defecating, making tea, and walking in the woods. The narrator is unnamed, a former heroin addict who lives with a girlfriend and a dog and has not yet published any novels. There is another character named Jordan Castro, here a fellow writer admired by the narrator, who is only interacted with via Twitter. The nameless hero’s compulsive maintenance of social media is to be understood in relation to his former addiction, while demonstrating something too about the way we live now, all of us. That said, he is “the novelist,” not just any scrolling and tapping millennial, and the decisions he has to make about his work prompt big thoughts to go along with the quotidian tea drinking and email checking.

The novel happens in something pretty close to real time; it narrates one morning, and could be read in one morning. It starts not with the narrator waking up, but with opening his laptop. To reproduce the experience of being online, Castro includes much physical detail, which requires complex sentence structure. The following narrates the moment after he sends an email to a friend, Li. The email reads, “we must’ve been pooping at the same time.”

A flush of blood, or something, I felt, rushed into my brain; a small but notable spike in my mood; then, without the slightest hesitation—besides the second or so it took me to move the cursor from the send button at the bottom of the screen to the + button at the top—I opened a new tab and clicked Twitter.

Castro gives as much attention to such physical processes as the “flush of blood” above (and the subject of the email) as he does to the online “content,” whether emails, tweets, or photos—The Novelist is also about what he does, and what’s happening with his body, while he’s on social media. The above reassures us that the narrator is savvy and has internalized the addictive design of all these platforms, those systems of rapid reward that satisfy and stoke the appetite, but knowing seems to be something less than half the battle. He’s learned from a podcast that Twitter works on the “same area in one’s brain as a slot machine” but he remembers this as he waits on the Twitter homepage for the number of notifications to appear. There are a lot of em dashes and semicolons in The Novelist, which are used to navigate through these sequences of non-momentous, sometimes unconscious actions. For summations of thoughts, and subjective claims, the sentences are much simpler, as in “I hated checking my email first thing in the morning. It set a bad tone for the rest of the day.” Or, when learning that he and Li had been using the bathroom at the same time, occasion enough for the email, “I was delighted.”

The novel is mostly caught between these two modes, plus another: the exacting narration of clicking, scrolling, and reading; relatively pithy thoughts (“Young people believe such silly things, I thought,” and “Fuck, I thought.”); some memories and more elaborated thoughts, including using Twitter as a teenager versus as an adult. The effect is claustrophobia, until there appears the image of something neither in his mind’s eye nor on the laptop screen. He doesn’t have an office, and works in his kitchen, which is what actually makes this escape possible:

I looked away from the laptop, twisting my neck, a kind of stretch, toward the still-steeping tea on the counter. It glowed amber, like beer, in the strands of morning sun that managed to break through the blinds; a few stray tea leaves floated inside the french press: floating there, my little stray tea leaves.

This is a hopeful moment of release, presaging a later excursion; near the end of The Novelist, the narrator goes out for a walk in the woods. One can imagine that after all the telegrams and anger, it’s good for him to “touch grass,” to go outside and get some fresh air. He reports disconcertingly that he feels as if he’s in a “simulation of a forest,” and there’s a well made joke about mediation, this one about his curious relationship to scripture: “I considered whether or not it was a valley, thinking, Valley . . . ?” then, “As I walk through the valley of the shadow of death”—the inaugural line of “Gangsta’s Paradise” by Coolio.” But the walk, something like getting back to basics, does help; he experiences gratitude for his dog, and remembers that he’d named the woods to his therapist as his “happy place.” That therapist was no good, apparently, but at the orders of a new one, he takes some deep breaths and for a moment feels “thoughtless and free.” Even better, he then becomes “cognizant of a goodest good; goodness itself,” and resolves to write The Novelist itself. 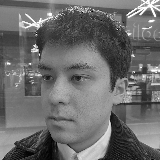 Kazuo Robinson is a writer based in New York. He runs a Substack at kazuorobinson.substack.com where he writes all about fiction. You can find him on Twitter @rudedaubings and on Instagram also @rudedaubings