Taneum Bambrick’s second collection, Intimacies, Received, is a searing glimpse into a catalog of intimate violence. Following Vantage, which chronicled her experience as a nineteen-year-old working on an all-male garbage crew in Eastern Washington, the rural landscape becomes an indelible backdrop for the violence inflicted upon the female body. Set primarily in southern Spain, the collection navigates overlapping layers of memory, from the speaker’s sexual assault at the age of eighteen to her tumultuous romance with a new lover. Her survival requires her to map these intersecting selves, revealing the reality of trauma inflicted on the queer, female body, where layers of violence are concealed in the landscape of the ordinary.

To reassemble her self-identity and reclaim the narrative of her life, the speaker must first traverse unfamiliar, frightening territory. Navigating the fields and streets of rural Spain, where she works as an English teacher, she enters into the first heterosexual relationship in the aftermath of her assault. She is warned that Spanish men are possessive and passionate, a gendered and cultural divide that alienates her into experiencing desire like the threat of assault: “Before I arrived in Spain, people warned that it would be very dangerous. They had words for Spanish men: beautiful, aggressive, seductive, alluring.” Navigating the foreignness of intimacy therefore becomes its own act of translation. In “Saying I Am a Survivor in Another Language,” Bambrick writes, “I was terrified. I didn’t touch a man for seven years. / Asleep. Your eyelashes open against my chest. / You are the first person to not know this.” Here, Bambrick articulates not only the cultural barrier but the emotional divide between the speaker and her partner, where language fails to convey a silenced history he can neither know nor comprehend.

The speaker begins by listing a series of truths in a litany of violent intimacies. “I have learned a man I love / harmed three women before me,” intones the opening line of the collection. “No one can say more than this. / If I search for an answer / I prioritize self-protection / over solidarity. Over belief.” Here, the speaker identifies herself as belonging to a sisterhood of harmed women, perceiving recurring violence in every moment of intimacy. One exercise she completes in therapy is “making a list of how various partners / differed from the man who raped me. / Their names— / written down and underlined / beside each other— / like categories.” Yet these boundaries begin to blur as flashes of traumatic memory interpenetrate, the narrative weaving between her past and present selves. While explorations of queer sexuality are usually presented as liberating, Bambrick’s bisexual speaker inverts this trope by rediscovering her heterosexuality. In doing so, she attempts to reclaim her sense of self after surviving assault. In “Willow Street,” she writes, “When after four years, C left, / she said I seemed unresolved about men. / That a single tragedy kept me / from fully discovering sex.” Bambrick delves deep into the painful process of healing, which begins with the teenage speaker sitting in a therapist’s office in her hometown. One incident of assault occurred next to the creek that was her namesake, further intertwining her sense of identity with the traumatic experience. In “After Toyen’s Sad Day,” the narrator names the lasting effects of this violence:

Sex was the first thing
someone else took away from me.
It took seven years for me to sleep with a man after I was assaulted.
I find it difficult to watch TV and popular movies where sex is
presented alongside violence. I am rarely comfortable having con-
versations with straight men.

Intimacies, Received examines the way that patriarchy enacts violence upon both queer and female bodies. Bambrick’s speaker is forced to navigate the precarious boundaries between heterosexuality and homosexuality, where straight relationships offer the threat of intimate violence and queerness carries scorn and erasure. “Erasure,” which appeared in BOAAT as “Bisexual Erasure,” begins, “Eating beside the wives of all his friends, I quietly order three oys- / ters. Disgusting, the person beside me laughs when the half shells / come over ice on a little glass plate. That smells like a dirty woman. / Leaning together, they wonder how nauseating it must be for their / husbands to go down on them.” The poem is a rare, striking depiction of the everyday violence of erasure bisexual women undergo in straight relationships—one that is especially heartbreaking arising from other women.

Here, the closet functions as its own form of intimate violence, where the speaker realizes there is no point in saying, “I am queer in a way that might puncture / the conversation.” In an interview with The Rumpus, Bambrick reflects upon the intersection of queer identity and femininity in her writing: “Queerness and surviving assault are both parts of myself I’ve felt forced to bury for the sake of the people in my life. I can chart where they’ve spilled into each other, like when J said she worried she was a stepping stone in my recovery process after assault, as if once I stopped having panic attacks I would revert back to dating men.” After becoming engaged to a man, Bambrick felt that her queerness became concealed: “I don’t know how to show it; it is still one of the most important parts of who I am.” Nonetheless, these intersectional identities inform the way she navigates the world. “That constant threat of homophobia, sexism, and assault,” Bambrick writes, “is something that a lot of people navigate on a daily basis and, from my personal experience, isn’t hyperbolic in any way.”

In addition to the violence enacted upon the speaker, Bambrick nuances her perspective by representing her own actions as a conduit of violence. As she explains, “The speaker of the poems is very close to me; a white cis-woman; who has a job; she has insurance. She has access to those privileges and is unintentionally violent to the people around her, too. She makes a lot of assumptions about the men around her.” Even though the speaker is constantly under threat, Bambrick says, “I think that the speaker is a force of violence in that space, too.” Often, she is an active participant in mutual romantic destruction. In “Écija,” she compares herself to a tied pig, then participates in a risky sexual encounter that blurs the boundaries of consent: “I heard him tell you / if we had sex I could die. / You lifted water to my mouth / that night. I was willing. / You smelled my neck. / You always asked by pushing me / onto your favorite side.” At a lover’s mural in Sevilla, she correctly identifies a hidden bird at her partner’s command. When her partner interprets the gesture as the fulfillment of a myth that they will marry, she “knowingly fall[s] into the narrative placed on [her] before [she] left.” Yet the speaker also acts with cruelty and indifference to those around her, growing cold in her long-distance relationship, leaving her lover in a hotel room in Florida knowing it is the last time she will ever see him.

“Legend” embodies the speaker’s uncertain place with the patriarchal landscape, as someone who both desires women and is objectified in return by men. Retelling the legend of Écija, she compares the landscape to the idealized body of a woman:

The city Écija was once a beautiful woman.
Her body permanent between
a mule ranch and hills of old olive trees.
The story starts with her falling
in love with the sun. The story
starts with the sun’s fixation
on her virginity.

Bambrick critiques this romanticized narrative by noting its obsessive fixation on women’s beauty and virginity. But she also implicates herself by becoming enthralled with the legend, which forms the landscape across which the gendered dynamics of her romance play out. She finds herself both pressured by and drawn to narratives of feminine submissiveness and masculine desire. The scene is a microcosm of how gendered structures function under the patriarchy—how the speaker, as a woman who loves women, is both a voyeur and a victim.

Bambrick’s innovative form weaves throughout the collection, creating a palimpsest of genres including ekphrasis, persona, and lyric essay. Sharon Olds, in the introduction to Vantage, refers to Bambrick’s work as a mastery of form: “prose-poem; lyric; essay-poem; stretched lyric (with a lot of space and time—a lot of paper—showing through); off-rhyme, off rhythm, off-image; impeccable off-grammar.” These overlapping genres are a way for the speaker to reclaim control over the narrative, such as an interconnected series of brief, numbered poems listing facts about her rape. It is the most precise in “Alligators: An Essay,” a lyric essay that captures Bambrick’s voice at its sharpest and most intimate. It moves seamlessly between Bambrick’s teenage relationship and sexual assault, to the intimacy of domestic life in Spain, to her own turbulent inner consciousness.

Intimacies, Received is sharp and breathtaking, a collection that glints like a gathering of knives. Bambrick’s unsparing voice runs like a dangerous current throughout the poems, a reminder of the violence lurking within the landscape of the ordinary. Moving between the vivid landscapes of past and present and through the fractured intimacies of human connection, the collection seizes the stigma associated with hidden trauma and at long last holds it to light. 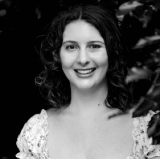 Eliza Browning is studying for a master’s degree in modern and contemporary literature at the University of Oxford. Her poetry and fiction appears in The Adroit Journal, Salamander Magazine, Contrary Magazine, Up the Staircase Quarterly and the Oxford-Cambridge Mays Anthology, among others. She edits The Oxonian Review and the COUNTERCLOCK Journal.