Despite its appearance, glass is not a solid state. Its molecules do not repeat, neatly, as in other solids, nor do they float and flow like liquids. Glass possesses qualities of both. It resists definition. Our lack of a word for this amorphous state reminds me of the beautiful failure of language, of the fact that literature is always a translation from mind to page, private thought to shared experience.

Glass—as gap, as lack, as in-between, as instability—offers a fine way of thinking about Paradise Close by Lisa Russ Spaar. It is a novel made of glass, possessing characteristics of both prose and poetry. It exists in that shifting, enviable in-between. This is a debut novel—“debut” is and isn’t accurate—written by an author in possession of a singular ear for the ways one can stretch and shape the English language and decades of experience as a poet, critic, and teacher. While studying for my MFA in fiction, I was a lucky interloper in Lisa’s Poetics of Ecstasy course, learning the “gem tactics” (that’s Spaar borrowing Dickinson) a poet can use to evoke a powerful, out-of-body experience. Although I admit to being predisposed to admiration, I write with a renewed sense of awe—for this author’s mind, music, and embodied, compassionate characterization. The novel is also intricately plotted, but I hesitate to summarize it and spoil the pleasure of its mystical unspooling.

The Mexican author and chemist Andrea Chapela calls glass “an orphaned material” in her book of essays The Visible Unseen, translated by Kelsi Vanada. Chapela offers up these descriptors: “fragile, breakable, amorphous, cold, translucent, disordered.” In part one of Paradise Close, we meet the main character, Marlise, whose attributes match this list. An orphaned, anorectic

girl, she is at first defined by what she does not have: parents, love, nourishment, home, money, or any sense of a future. Sitting on a near-empty bus, Marlise hurtles toward an empty house, her great-great grandparents’ home, Paradise Close. (While the novel is named after the house, the reader is left to question for whom is this paradise?) In an early scene, Marlise studies an old photograph of her mother, and we begin to understand the root of her disease:

The problem was her body. The palms of her hands, her shins, hurting at night, breasts like welts, the blood that started, a private surprise of thrill and confusion, in the school’s basement art room, her period coming on later for her than for other girls she knew—that was the difficulty, all of this helpless change, and all that it seemed to invite. In others, not herself. Her mother, beautiful Beatrice, squinting into the sun. Here is my body, gazing at yours. Feast.

Spaar offers a stark, sorrowful look at illness. As her health declines, Marlise feels cold even in a scalding tub, her mind turns “blank as a cloud,” and, at one point, her “small spill of urine in the bowl [is] the color of wet brick.” My fear for this character was so intense I had to pause and remind myself: This is fiction. She is not real and in no real danger. Yet Spaar’s novel is so gripping—especially in the scenes concerning this character—I read forward with a visceral, maternal worry, wondering how Marlise would make it out of her illness, or whether, like glass dropped on concrete, she’d shatter.

Perhaps all this talk of glass seems like a stretch, a critic insisting on an (unstable) extended metaphor. Allow, for me, a bit of detective work: Spaar’s first book of poetry, published in 1999, was Glass Town, named for the Brontës’ paracosmic world “Glass Town,” a shared, fantastical place that allowed the Brontë children to roam and play, dreaming up stories together and co-creating an imaginary world as respite from the harsh reality of grieving their mother and two sisters. Marlise, too, hides from grief in a realm of her own making, her sick solitude. Spaar’s poem “Finishing Jane Eyre on the Grounds of the University of Pennsylvania Hospital” is a seed to this novel’s tree. The poem’s speaker, while re-reading the end of the novel, realizes the immense power of being seen and understood by another: “He saw her/ And so he haunted her,/ ever after, implausible and real.” Alone at Paradise Close, Marlise finds similar company with her mother’s childhood copy of Jane Eyre, and is haunted by the first person who truly understands her, Silas, a talented artist and fellow patient on the psychiatric ward. Paradise Close is a testament to how a single book, or a single person, can save a life. Over the course of the novel, we see Marlise change from an isolated ghost of a girl, unknown to herself and others—“pile of twigs on the floor in the corner”—to a grown woman with “an embodied life and a desire to endure.”

Late in the novel, Marlise—a sixty-year-old woman with an art practice, career, children, and lovers––reflects on the idea that childhood is a “glass-like construction (what did Shakespeare call the self, a ‘glassy essence’?), an asylum, in both connotations of the word—imprisonment and freedom.” This tension, between imprisonment and freedom, tidy narratives and murky truth, runs through the book. As we age, it’s tempting to make sense of our own lives in a neat line. Yet the stories we tell ourselves can also be a trap, sticking us in a fixed, rigid mindset. The truth tends to be more fluid—some details lost to time, identities forgotten or erased, full of coincidence and missed connections.

During their unfolding, the novel’s three sections do not fit neatly together. Scenes take place across a century, with chapters moving between 1971, 1940, and 2017 (and for a brief moment Walt Whitman skinny dips in the 1870s). Characters evade time. Some, perhaps, belong in an earlier period: one tinkers with clocks; another builds and repairs umbrellas. It is unclear, at first, how these characters and eras relate. Understanding comes with time, as does pleasure. Shakespeare, Cymbeline: “The more delay’d delighted.” Spaar’s is a novel that rewards re-reading. Its elliptical structure reminds me of Ondaatje’s Divisadero, another shattered text, in which the main character, Anna, teaches you how to (re-)read the novel:

It’s like a villanelle, this inclination of going back to events in our past, the way the villanelle’s form refuses to move forward in linear development, circling instead at those familiar moments of emotion…For we live with those retrievals from childhood that coalesce and echo throughout our lives, the way shattered pieces of glass in a kaleidoscope reappear in new forms and are songlike in their refrains and rhymes, making up a single monologue. We live permanently in the recurrence of our own stories, whatever story we tell.

Spaar is interested in how memories and meaning shift over the course of her characters’ lives. There’s an unforgettable scene, toward the end of the novel, in which the long-dead character Silas communicates with Marlise: “I see you in all your ages, [Silas] had said.” Nothing mystical happens, exactly. There are no physical ghosts, no séances. Memory is this novel’s ghost; the search for meaning is what haunts. Time may pass, Spaar suggests, but it doesn’t need to pass us by.

Toward the end of another beloved poet’s novel, The Bell Jar, narrator Esther Greenwood arrives at an asylum during a snowstorm, “not a Christmas sprinkle, but a man-high January deluge.” Ill, she longs for the cold silence of snow, wanting all of her bad thoughts blanketed in a clean, white slate. “Maybe forgetfulness, like a kind of snow, should numb and cover them,” Plath writes. Spaar likewise offers snow as a threatening metaphor for mental illness. It’s dangerous to long for such cold. Marlise realizes true connection doesn’t require that she lose herself. She arrives at what Simone Weil calls “interior solitude,” happy alone, with relationships that honor her solitude and at peace, at last, with her many hungers.

“The child self, the emerging self, the aging self, any self—is always imperiled,” Spaar writes, near the poignant end of the novel. “Yet if it is glass-like in its breakability, its fragility, it is also glass-like in its tensility. Its obscurity, its clarity. Both.” Fitting, then, that the end of this novel is also an arrival, a new beginning. Both. Life, if you’re lucky, is long and amorphous, Spaar tells us. As you look back, allow yourself some grace. 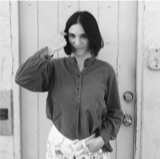 Nichole LeFebvre is a writer and artist based in Oakland, California. An alumna of Hedgebrook and the University of Virginia’s MFA program, she has published fiction and nonfiction in Catapult, Fourth Genre, Ninth Letter, and the Los Angeles Review of Books.