The poems in Brian Tierney’s Rise and Float feel as though they’ve traveled a long way to get to the page. That is, the poems feel shockingly precise, refined, and lacking the potential pitfalls sometimes associated with “debut” collections. Like crystals that form under tremendous pressure, Tierney’s poems have the shimmering quality of something matured and shaped by the sheer force of time and the deliberate way in which Tierney renders experience. While the poems feel at once lyric, jagged, and interior, Rise and Float as a whole collects gravity, weight, and movement over the course of its five sections.

The book’s major theme, for lack of a better catch-all term, is mental illness, but even in saying so, I regret the profound ways that summation mutes so much of the beauty, nuance, and care in Rise and Float. On the heels of a father’s loss, the reader follows the speaker as he negotiates a world marked by elegy and the hereditary manifestation of mental illness, which now seems to announce itself everywhere, as in “rorschach #1”:

an Angel falling very slowly into a man, and a man

ascending slowly
the stairs, to a flat
black roof

The book isn’t afraid or shy about its handling of this topic, but it does so subtly, deftly, always with a sleight of hand. Tierney’s poetic abilities only amplify the stakes of these poems—they serve to put further into relief the question of whether or not to keep living in the face of tremendous existential suffering. It is the very precision of Tierney’s diction and syntax that allows him to access revelations of such unreserved honesty.

Tierney’s vision and poetic voice strike me as singular yet allusive, image-driven yet rhetorical, and always laced with a profound emotive intensity. His poems feel as though they are looking you in the eyes as you read them—that level of integrity, and confrontation. Much in the Merwinian vein of the book’s epigraph, reading Tierney’s poems make the reader feel like “there is no distance / so that water / is looking at water.” These poems have the baroque syntactical style of a late Levis, with the primal intensity of suffering one might find in the great poems of Franz Wright.

Rise and Float is split into five sections, and the book begins with the poem “Wormhole”:

All winter, the house groaned as in a very great depth,
so that I often couldn’t sleep. Then, one day, as if the inverse
of lightning, silence occurred, entrusted to the hour:
I became each minute, I became every direction at once

and fled from source and definite position, and returned
to my mother in plaid widow slippers, the blue flaking hallway

The opening lines of the book display Tierney’s rhythmic phrasing, strange yet accurate image-making, and his ability to fold in complex narrative information through description, such as the “plaid widow slippers.” In these opening lines we understand the loss of the father, the speaker’s connection to the mother, and a sensibility that feels displaced from time and space, as if embodying the indeterminate “floating” of the book’s title.

While seemingly minor, Tierney creates titles which bear not only much of a poem’s meaning, but also serve to further and speak to other poems in the book. Take this first poem “Wormhole” for instance. Wormholes “are hypothetical bridges through space-time.” Visually, “wormholes contain two mouths, with a throat connecting the two” (space.com). The titular choice for this opening poem feels significant and deliberate. I think Tierney is aware of how intimately the language of the wormhole, its “mouths” and “throats,” relates to the illness of bulimia, which the speaker deals with explicitly over the course of this book. In this way, Tierney has connected the “wormhole” as at once both a portal to the cosmic and a portal to the poet’s deepest interior.

Similarly, the image of the “hole” comes back in the poem “Ideation.” When read in the context of Tierney’s book, the looming prefix of “suicidal” feels present without having to be acknowledged. The poem begins:

Inside, the hole waits.

And again the hole comes back in the book’s third section, specifically in the poem “Polyphagia”:

it only made me want more. How many ways can you fill
a hole, I once asked a shrink, it depends on the hole
I think, and he scribbled something down, taking my order.

Polyphagia, the medical term for excessive or extreme hunger, points to the necessary context for the poem. The “hole” is at once the “mouth” and also the same existential hole of suicidality we get in “Ideation.” Tierney fundamentally entangles the two often-separated notions of “mental” and “physical” illness.

Despite being a heavy book, full of self-reckoning, a thread of self-effacing humor creeps up from time to time and provides a much-needed balance to the reader’s descent into the speaker’s darkest holes. In the poem “Bridge,” Tierney writes:

Perhaps, it is cliché
That stops me, leaning over the railing
so many hands have touched,

It is often when transmuting experience into language that this humor appears. Earlier, in the beautiful poem “Hearses,” the snarky professor:

once wrote to me that to write of fruit
or flowers or dreams, no matter how deftly
is the lowest form of metaphor, after processions.
Years later, on the subject again, she that time
indicted horses as well, most especially wild ones

If I seem emphatic about Tierney’s debut, it’s because I am—it is a book that has managed to render acute beauty from enigmatic pain. Tierney captures the blighted urban/suburban landscapes of Philadelphia and the tri-state area, familiar from my own childhood on Long Island, with accurate attention to place and class. Anyone who has driven the Garden State Parkway at dusk will know what Tierney means in “Hearses” when he writes, “a low-angled sun-/set beat the marshlands into flat metallic fields.”

Ultimately, Rise and Float is not a book about being saved, but it is a book about learning how to live inside the darkness. Despite the best intentions of the book’s closing poem, “You’re the One I Wanna Watch the Last Ships Go Down With”—a devotional poem for the speaker’s beloved—Tierney still finds himself in the space of elegy. The poem ends:

Forgive me, again, that I write you an elegy
Where a love poem should be.

The book’s title recalls the phrase “Rise and Shine,” which itself points towards salvation, the shining sun, the brighter day. But Tierney’s title, while rejecting a backwards motion, also rejects a forward one. It is the liminal space inside which the speaker of these poems has found a place to live. If elegy stands at one pole, and the love poem at another, it is the space in between in which this speaker “floats.” 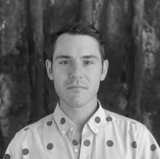 James Ciano holds an MFA from New York University. Originally from New York, he lives in Los Angeles, California where he is currently a Provost Fellow at the University of Southern California, pursuing a PhD in Creative Writing and Literature.