“A Loose Dissertation on Movement, with Souls of Mischief as Soundtrack” appears in Issue 42

Words arrive to me in the most unanticipated and impossibly unlikely moments of random observation, which are then collaged into a singular moment. That is, they are unplanned but, with some attention, become coherent. They are certainly erratic. I appreciate that about poetry—a genre of intuition, vibration, and reflected sensations, rather than explanation. That’s exactly how “A Loose Dissertation on Movement, with Souls of Mischief as Soundtrack” hit me.

I was on a winter trip in Copenhagen, wandering the frozen, freshly snowed-upon streets with my wife. We were far from home, as two Mexican Americans from the Bay Area who didn’t grow up exposed to international travel—besides family trips to Mexico—moving through new, distant terrains. We were together, in a city I’d once heard rappers from my area brag about in their verses about touring the world. I was a teenager back then, and because of that, I had always wanted to go, myself. In many ways, hip hop has always guided how I view the world—it has literally given me a map with reference points, a creative compass I often utilize.

Unfortunately, our trip to Denmark was in December of 2021, and the Danes still had a strict lockdown on public spaces and events, so movement was mostly restricted and I wasn’t able to fully immerse myself as I’d hoped; there wasn’t much else to do besides wander the frosted lanes and bricked alleys. It felt romantic and foreign, in some ways, yet the gritty, graffitied culture of the neighborhoods still managed to remind me of home: the San Francisco Bay Area.

As the son of Mexican immigrants, I’ve always found music and place as an intersection for some sort of refuge; rap and travel, in particular, are a few of the privileges that came with being a first-generation U.S. citizen. In both, I am an active participant. They teach me how to maneuver my environments, how to move through the madness. Poetry is an extension of those expressions.

I wanted those layers of myself to loosely be scribbled here. After spending nearly three weeks exploring unknown corners and moonlit angles in Denmark—which is an experience I don’t take for granted—I simply sat down and recorded my informal dissertation. “Souls of Mischief” had been playing in my headphones during my travels (I always make playlists of local Bay Area rap for every country I visit, like a sonic set of coordinates that helps me interact with diverse spaces while staying rooted in myself). Meanwhile, I had been learning about hygge—the Danish concept of coziness and homeliness. Traveling—movement—is that conversation between my comfortable self and uncomfortable self, and that’s typically when a poem blooms for me. The “serape” in winter was that feeling of being a Mexican Californian in the far north: how will my fabric hold up? Other objects and sights/sites are also linked to my selfhood (basketball, for example, is another major thread in my everyday life), and the form of the poem as a sort of litany felt like a natural way to hold it all in place. Nothing fancy, nothing overplanned, just a classic listing of what I was seeing and what was connecting itself in that moment.

That’s what poetry has served as for me—an uninvited but liberating amplification of environments and textures passing through me. By writing, I’m simply putting that noise and imagery on the page with its own type of movement—and giving a soundtrack to it all. 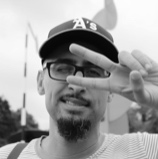 Alan Chazaro is the author of This Is Not a Frank Ocean Cover Album (Black Lawrence Press, 2019), Piñata Theory (Black Lawrence Press, 2020), and Notes from the Eastern Span of the Bay Bridge (Ghost City Press, 2021). He is a graduate of June Jordan’s Poetry for the People program at UC Berkeley and a former Lawrence Ferlinghetti Fellow at the University of San Francisco. He writes for KQED. Find him pochosizing on Twitter and Instagram @alan_chazaro.