Karyna McGlynn’s poems have an addictive quality. As I devour them—savoring, now, the way one poem’s hard-candy shell melts to expose a core of exquisite tenderness, and later, how the salted rim of another poem’s frosty shot glass tricks my tongue into forgetting the fiery rebuke that awaits it—I keep telling myself I should stop.

It’s not like I borrowed 50 Things Kate Bush Taught Me About the Multiverse from the library. Each poem is mine to keep. They smack me into delirium, and again into delirium’s comedown. When they smack me into delirium’s hangover, accompanied by the silence that echoes after each heart-stopping ending, I am too greedy not to turn the page for another fix. “That’s the best part: it continues,” McGlynn writes about the afterlife of a nightmare in “How to Die in Your Dreams,” but the line could just as easily apply to the experience of reading the ecstatic “Witches Be Everywhere” and realizing that the book is only a quarter-finished.

There is plenty to be said about Kate Bush and how 50 Things—mostly completed, I imagine, in prescient anticipation of Bush’s abrupt and viral resurgence (thanks to Season 4 of Netflix’s Stranger Things)—mirrors the singer’s idiosyncratic brand of Dark Romanticism and High Camp. I’m not, however, one of Bush’s diehard fans, and luckily, in order to follow McGlynn into the forest, I don’t need to be. Were I to change my major to Kate Bush Studies, it would only be to obtain a fuller glimpse of this poet’s charismatically coarse yet elegant work. In other words, I am less interested in Bush’s Inferno than I am in its guide: McGlynn brings out the nascent Stage Mom in Dante’s reproving yet fame-obsessed Virgil. My brain warns me of caricature, but my heart believes that this later version is truer than the original.

Poetically, McGlynn aspires to such great heights. One takeaway from my reading of decades of Sylvia Plath criticism is that the achievements of ambitious artists who happen to be unapologetically female are not always tolerated, much less celebrated, by male critics. Women are scorned for their softness and ridiculed for their intractability. Poets as strong as McGlynn and Plath, however, gave up a long time ago on letting anyone stop them. They’re too busy summoning a full arsenal of powers to listen to weak critical readings of their work. Who can call her a name she hasn’t already called herself?

However you end up reading 50 Things—rapidly or deliberately, with a Kate Bush dictionary in hand or backwards under a blacklight—you will discover the full expression of a voice that sounds rare and untraceable. A few of McGlynn’s teachers have been my own—a fact that makes it all the more peculiar (and refreshing) that I recognize not one of their fingerprints on any of her pages. Poets must possess a great deal of gall and gumption to argue imaginatively with their instructors; if they are to walk across their own pond without the help of the masters’ lily pads, they must believe in themselves to the point of delusion—of no turning back. McGlynn shows us how it’s done.

When, in “How to Stop Raping the Muse,” McGlynn trots out her history of offensive workshop feedback, I think about all the times I’ve heard students use he/him pronouns to talk about a poem written by an Anne or a Dorothy or a Lucille—even with the author’s name printed in bold ink above it! “WOMEN WRITE, TOO!” I want to scream, as McGlynn must’ve wanted to scream every time she heard some version of “Why don’t you get married / and have a couple of babies?”

Regrettably, McGlynn’s book appears to have had another premonition of the socio-political circumstances that would greet its arrival. I’m talking about the erasure of American female autonomy at the federal level. When the U.S. Supreme Court’s decision came down, I was in Ireland—a heavily Catholic country with a long history of anti-abortion politics but which now affords its female citizens more dignity than the United States. McGlynn’s poems remind us, without a trace of preachiness, of how often women’s bodies are subjected to public debate under the disingenuous banner of concern for “the unborn.”

Also in “How to Stop Raping the Muse,” the line “Okay, Miss Witty, where’s the vulnerability?” struck me with immediate recognition. It never fails to perplex me when readers attack a poet’s wit on the basis that comedic shrewdness and emotional depth cannot be reconciled. Have they never read, I don’t know, Shakespeare? And with apologies to Brene Brown, I have frankly grown bored of hearing about “vulnerability.” It’s like this decade’s version of “the unconscious” or “deconstruction”: its misuses are so ubiquitous that it can practically get away with meaning anything.

Haven’t we heard enough about our own supposed suffering from the garment-rending chorus? I’d prefer to get back to the protagonist—to read more of “whatever / this is” by Karyna McGlynn. Sure, her speaker lets out a sob now and then, but when she confesses, she doesn’t just whimper, she owns up to her terrible thoughts and dirty deeds. “More than once, I’ve considered / setting the place on fire,” she writes, in “I Wake Up in the Underworld of My Own Dirty Purse.” The place is the speaker’s “dark bordello” where “things stick,” an uncannily vivid embodiment of resentments reimagined as tools and weapons, where “purse perfume” evolves “into a working escape plan” and a tampon string leads to “a soft stick of dynamite.”

McGlynn reminds us that, when we get right down to it, true vulnerability ends in paradox. Stepping into your strength may be the most vulnerable thing you can do. This is especially true for visionary female poets at the height of their powers. 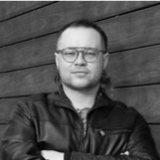 Justin Jannise is the author of How to Be Better by Being Worse (BOA Editions, 2021), winner of the A. Poulin, Jr. Poetry Prize. A recipient of the Inprint Verlaine Prize and a former Editor of Gulf Coast, Justin studied at Yale, the Iowa Writers' Workshop, and the University of Houston, and now teaches at Prairie View A&M University.