When my mother died from Covid, she left behind a husband, two grown children, three grandchildren, and her body, which belongs to the earth. She also left behind prayers—four pages single-spaced.

the man who was in the hospital with my husband.

The nun who took me shopping with her when I was a little girl.

Henry and his dog Honey-do.

My sister writes in a journal to our mother every night, and that is her prayer.

I go to Mass even though sometimes I find it uninspiring, even though too often the priest botches the homily, misses an opportunity. I feel that I could give a better homily. Forgive me for my lack of humility. I continue to go because my mother is gone, and it’s one place, sometimes, where I can find her.

I prefer to be in church not during Mass but when no one else is there—a quiet church, dark but for candles. I always light one for my mother. It feels good to kneel and close my eyes.

The truth is, and I don’t think the God I believe in would mind one bit, I pray not to God but to my mother. I talk to her. I don’t speak aloud, not in church. I save that for the car. Any time I drive alone, I talk to myself, from the moment I get into the car to the moment I get out. Sometimes, when I have arrived at my destination but am not yet finished talking, I sit in the parked car and keep going. Wearing a mask helps me feel less self-conscious. But even not wearing a mask, I have stopped caring. I am someone who talks to himself. And to my mother. So what. It can be a form of prayer.

I have a box filled with condolence cards and letters, and collectively they are one long prayer, one long poem: Your life has changed in ways that are not evident now. I can’t imagine the depths of your sorrow. Oh my dear I cannot imagine what you are living and feeling. You’re in my thoughts and heart. My deepest sympathies as you work through her absence. Such sad news. And crushing. These are the moments when words fail us. A mother’s passing never goes away. I wish you strength, my friend. Vulnerability, too. Your mom will stay with you, maybe taking up a little different space than she has so far. You’ll sometimes be surprised by the ways she’ll turn up in your life, often in your own character.

The other night, my mother gone over a year, my son came into our bedroom crying. My wife asked what was wrong. He said, “I’m worried about Nana. I’m worried that she’s lonely.”

“We’re not planning on going anywhere,” my wife said.

He kept crying. He was hyperventilating. He wanted to know what if our dog died, what if his grandfather—my father—died.

Sometimes a prayer is silence.

Here is a prayer. It was in the form of a game. My son asked me, “If you could have any object in the world for free, what would you choose?” I told him that my second choice might be the jersey Franco Harris was wearing in 1972 during the Immaculate Reception. My first choice, I said, would probably be an Edward Hopper painting.

When I asked what his object would be, he said, “Nana and Pop-Pop’s house.”

I said, “But Pop-Pop lives there. Would you rent it out to him?”

“So would you move all the way to Indiana?”

“No,” he said, “but we could visit. We would always keep it just the way it is now.”

I told my son that his answer was much better than mine. Mine, I told him, was dumb.

“Don’t call yourself dumb,” he said. “We can hang the painting in their house.”

One more prayer, my favorite, framed and hung on a wall in our home: a penmanship assignment when I was in grade school, my mother’s signature in red ink at the top, the same sentence written neatly in pencil over and over: 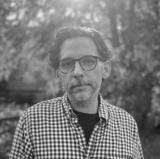 Nicholas Montemarano is the author of three novels, a short story collection, and a recently published memoir, If There Are Any Heavens (Persea Books, 2022). His writing has received an NEA fellowship and a Pushcart Prize. He is the Alumni Professor of Creative Writing and Belles Lettres at Franklin & Marshall College.

0
Nicholas Montemarano August 9, 2022
No Comments Yet