Lynn Melnick’s poetry does not remedy our suffering, but it does make us feel less alone in it. The poems in her new collection, Refusenik, are exhaustions themselves, evoking the devastation of lived trauma and the inertia of a psyche caught between two polarized states of being. She plunges us head first into our own disquiet, both existential and embodied, and keeps us there, nervous systems on high alert, as we unearth the undercurrents of our own experience alongside her.

The psychic anxiety begins with the title. The term “refusenik” refers to a person in the former Soviet Union who was prohibited from emigrating, especially a Jewish person to Israel. It also refers to a person who refuses to obey the law in protest. Encoded in the title, then, is paradox, fragmentation, dichotomy—a person who is refused, and who refuses. Melnick places her speaker, and us as readers, into these internal contradictions: refused and refuser, victim and oppressor, the implicated, and the crime in one singular body.

Poems in the collection explore violence in all its forms—sexual, physical, emotional, and spiritual. She writes about events such as the execution of thirteen Jewish intellectuals on Joseph Stalin’s order in 1952; a plane crash that led survivors to cannibalism; and the unjust treatment in 1984 of Olympic runner Zola Budd. And in candid, inward verse, she also reflects on men who “send you // to the hospital between apologies and excuses”; analyzes Fiddler on the Roof as cultural violence in its “folksy point / about conformity”; and examines capitalism’s refrains in the “use value” given to women’s bodies for men’s sexual desire. The poem “When Bad Things Happen to Good People” summarizes her thesis: “Survival has taught me / the patriarchs are what we’ve got.”

Many poems, on the surface, narrate coming-of-age moments from the speaker’s past; however, these moments can also be understood as fragments of a longer cultural history. In “The Night of the Murdered Poets,” the speaker’s own intellectual labor becomes a gesture of continuity from their timeline to hers.

Once upon a time,
you could simply kill the poets.

I should say. I was growing—what
is the word for something that grows

peculiar and withstanding?—
in California like the orange tree

not native to the soil.

The poem’s turns are ubiquitous—“But” and “Well” and “I should say” and the question mark fused with the dash. The linguistic sensation is one of chiseling away, almost of groping through the dark, of specifying, searching, clarifying, like a mind turning over on itself. The speaker searches for the murdered poets, attempts to uncover the “murder weapon” that is buried “dozens of metaphors deep.”

In “The Only Jew at the Mock Jewish Wedding,” Melnick explores the complexity of a cultural tradition, which, in its purest sense, is meant to teach Jewish youth how to perform the marriage ritual. The poem investigates its subject in the dark, like a question with no answer. The poem’s range is wide—a “friend’s missing father,” the anticlimax of eating unkosher fast food for the first time, an ancestor’s lies about the family’s social class origins, Jewish migration and cultural assimilation. These subjects are vast, even overwhelming, yet Melnick compresses them into staccato couplets, her verse like a vise that mirrors their compression within the speaker-poet’s body, the living, breathing concentration of it all.

Assimilation is quick. Also impossible.
In Ukraine, where Melnicks originate,

figurines of Jews
are sold as good luck charms.

In America, I’m hanging on inside my own pocket.
I dare you to watch me parade my costume

here. I am not particle underneath.

In Refusenik, sexual violence is ubiquitous. Timeless, tragic familiarity meets embodied moments of traumatic suffering as she narrates her own experiences, drawing us in through the extension of a hand in transparent solidarity. Often, the verse becomes searingly concentrated into a single, pointed plea. In her first “Inauguration Poem,” she begins, “Do you know what it’s like when a body twice yours / holds you down in the room where you make your life […]?”  The poem is then structured as one long continuation of this question. We answer in endlessly personal ways: we answer yes, we know; we answer no, we cannot know. No matter how we answer, or how we approach the poem, we are confronted with dread. Melnick captures this perpetual overlay of foreboding with perfect precision:

even when sometimes there is whisky and sometimes
there is joy, there is dread in the ficus tree on the landing

moving in and out

The “dread” and the “ficus tree” cohabitate; in effect, the traumatized mind and the minutia that surrounds us coalesce into a world that requires disembodiment for survival. The speaker is indeed “inaugurated” into a pervasive system that steals life, that makes every good memory seem like it’s happening to someone else.

The second “Inauguration Poem” tells the perennial story of a drunk “friend” who makes an aggressive sexual advance, then asks for pity because he’s simply having a “bad night.” After some cajoling by the larger friend group, the victim of the assault ends up apologizing to the perpetrator. The narrative, in itself, is haunting in that it has become commonplace to the point of cliché, but the real brilliance of the poem is in its title. Like an official sworn again into office, the speaker is once again initiated into a complex social structure that is simultaneously known and entirely new. Melnick sets back the clock. Each instance of violence becomes a new starting point, a new solemnity, each event a new subjugation of person to system, a new way of seeing oneself in the world, of apologizing for oneself in the world.

Melnick’s poems live within the awful quotidian, yet there are moments of respite. At times, in fact, the speaker seems almost intoxicated by peace. In “New York City, 1994,” we see the central persona eat candy in a dark theater, meet a woman, and follow her to an apartment where the two lay naked and listen to the woman’s demo tape of songs about dogs. City sounds, like an erotic reverie, are “grunting” and “cooing” in an “impassioned chatter” out the window. In the midst of the scene, the speaker exclaims, both in surprise and declaration, “and it was okay!” The “dread” has subsided, at least momentarily, in this space with a woman who does not menace, who does not expect, who exists innocuously, close by without looming.

The speaker also finds integration and wholeness in moments of cognition beyond language, in the complex comingling of sorrow and joy, beauty and devastation, birth and loss, innocence and experience. In “The Whole World Is the Best Land I Ever Lived,” the speaker’s habitual walks with her child evoke infinitude and the “finite” in equal measure:

When you were six, mornings
you’d look for one unbroken
leaf on our walk to school to hide it

so later we could find it again
walking home. That kind of faith.

And later in the poem:

Be. There. Each afternoon
we dug through the shallow leaf
graves, your fingers my fingers

but slowly distinct. I am sorry
I will have to be finite on your
wondrous and steadfast earth.

Many of Melnick’s poems, especially the title poem “Refusenik,” are porous, white space calling for as much attention as the words on the page. It is as if analysis has been muted, and we are left with negative expression, words as mere traces of that which has been imprinted on the psyche, perhaps even on the soul. The blank page becomes a plea and a proclamation, a suspended canvas on which the refrain “I exist!” is etched onto each letter of each poem and onto all the spaces in between. 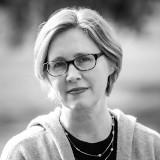 Sarah D’Stair is a novelist, poet, and literary critic. She is the author of One Year of Desire (Finishing Line Press) and Helen Bonaparte (Late Marriage Press). She received her Ph.D. from the University of Massachusetts, Amherst. Photo: © Molly Schlachter.