What does it mean to freely offer your trauma to the world? To belong so consciously to yourself, that nothing else can hold you in its power? In their debut poetry collection Content Warning: Everything, Akwaeke Emezi chooses themself in every poem. They unfold their deepest pain through divine acceptance and a reclamation of control. These poems—lucid, charged, fearless—have nothing to hide.

The words “what if” command the title of several poems, such as “what if my mother met Mary” and “what if Jesus was my big brother.” Through such hypotheticals, Emezi bridges the distance between what is considered human and almighty. And by considering the characters as chosen family, they declare the great extent of their spiritual capabilities.

The very first poem in the collection “what if my mother met Mary” sets the stage for a complete restructuring of social norms. Both Mary and the speaker’s mother are “pregnant” and “sick of the men in their houses” and “looking for a moment of quiet.” Mary says her people are from “palestine” and the mother says hers are from “ceylon.” Mary is now “auntie”; the two expectant mothers play scrabble and nurture “little gods” in their bellies. In this collection, Emezi remembers a world without binaries. Where there is no patriarchy, nor white supremacy. These “little gods,” the poet indicates, could come from a free past.

Notably, that freedom is also their burden. As the title indicates, the collection lives on the foundation of violent memory. But by acknowledging how the alternative past once was free, Emezi then imagines the possibility of a divine future. And to reinforce this possibility, they tackle their present trauma directly and incapacitate it.

For example, in “Confession” they write about keeping the objects that once belonged to their abusers. The poem begins—

forgive me, father, i confess to being a ragtag doll
scraps from men or places where i left myself
even when my pieces were taken, they were old
they didn’t fit anymore, nothing haunts me long term

Here, they are letting go of what was taken from them. Instead, they keep “wedding rings,” “hair and skin flakes,” or “shorts from the boy who raped [them].” Emezi claims the power of ownership for themself. The poem ends—

he wasn’t the first i took pieces from, these offerings
to fill the negative altars burning inside me, father
forgive me, everything eventually is always mine

“Everything eventually is always mine” —these are the words that hold the collection together. Emezi wants every moment, even the violent ones, for themself.

Self-harm, too, is a form of violence. In the poem “folding for a cruel man” the speaker is aware of their toxic attachments. Emezi writes, “you are the hardest love / to survive you, i press my skin away / flatten my want and break the necks / of my dreams, making them dead diamonds.” The speaker is making themself small for someone who is cruel. But they continue, “i remind myself that i am worth / the glittering corpses of glory.” This is a recognition that even if they hurt themselves through their toxic attachments, they are in control of that hurt.

If Emezi is attached to harm—or darkness—it is only because there has been so much of it. And by displaying it to us in this daring collection, they are saying, “Look how I hold it so tight? Look how it does not control me?” In this way, they are a God—all knowing—which goes back to how they want to associate with a godlike family.

To create this chosen family, Emezi combines spirits and pulls from their identity. The references to igbo religion, wherein the speaker claims divinity after surviving trauma, draw from their Nigerian roots. Saying “auntie” or “uncle” following the name of kin draw from South Asian ontology. And it all comes together with Biblical familiarity to create a great world of sacred belonging. In this way, they show how they are whole, complex, and powerful.

Ultimately, though, they are God because they are indestructible. In the poem “I was born in a great length of river” they are even stronger than water. In the bathtub—“i sink as deep as i can, involve my lungs / it takes nothing if i add nothing.” In the pool at age nine—“i could hold my breath / for seventy-five seconds.” In Ghana twenty years later—“i tripped on a rock / while trying to leave the ocean… i held my breath / and i did not die, do you hear?” The poem ends—

what i’m saying is, it doesn’t matter which water
i will never know what it’s like to drown

When they say they will never drown—that spiritual certainty emanates through the pages. Consider the titular poem, wherein Emezi lists all of the abuse they have encountered. And then—“is it sacrilegious to say i / would rather be savaged again than lied to i rose from my death”—they are still here, offering themself to the world. The poem ends—“i am the fucking miracle.” And there is no better way to describe Emezi’s revolutionary voice. 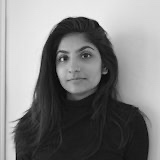 Jeevika Verma is a poet and journalist. She currently works at NPR—producing for Morning Edition and contributing to the network’s poetry coverage. She’s also the poetry editor at Kajal Magazine. Her work has been on NPR, WNYC, Electric Literature, Filter, Ploughshares, Crosscut, The Juggernaut, and more. She also has poems in Levee Magazine, The Sentinel Quarterly, Ninth Letter, Cleaver Magazine, and several independent zines.