The question of the value of poetry, its place in the present as a public form of address, is never far from sight in poetry discourse. In the case of explicitly political poetry, this question shifts register, turning itself outward into the question of poetry’s potential to effect real world change, to incite action.

Diane di Prima’s Revolutionary Letters, published in this fiftieth anniversary edition, is a collection as politically incendiary as any poetry written in English across the last half century. Beginning in the late sixties (the original edition of the letters appeared in 1971) and ending with poems written shortly before her death in 2020, the project has a scope of fifty years of poetic activity. Born in Brooklyn in 1934, di Prima was the granddaughter of an Italian anarchist Domenico Mallozzi, and it is to him along with Bob Dylan that Revolutionary Letters is dedicated. By nineteen di Prima was learning from her reading of Keats and corresponding with Ezra Pound. She dropped out of college to become a poet, getting involved with Beat movement figures including Amiri Baraka (LeRoi Jones) and Hettie Jones who together published di Prima’s first book of poems in 1958. Her Manhattan circle also led her to develop friendships with Frank O’Hara and Audre Lorde.

This mixed milieu shows itself throughout the poetry, which bears hallmarks and motifs from the Beat and New York schools, Romantic touches and modernist interrogations. This plurality of influence is mirrored by the manifold array of subjects: practical activist instructions, anarchist declarations, political theory, ecological cries, cosmology, occult readings, music, theology, cooking, family, and hanging out with friends. However, to describe the poems as montages would be something of a category error: di Prima’s focus in these letters is not primarily disjunction/juxtaposition but unity. Her configurations emphasize re-contextualization, the smoothness of the join. Art’s creation of wholeness is both their poetic criterion and their political vision. As she writes in REVOLUTIONARY LETTER #75:

the work stems from
hangs from the heaven you create

From the outset, the political activity, the activity of poetry, is directly linked with the body and with the time accorded to it. The very first poem REVOLUTIONARY LETTER #1 opens with the line “I have just realised that the stakes are myself.” Poetics for di Prima is a term for the activity of human spirit, the “inner sun” that guides the way each of us makes the world and ourselves. We step out with it, “like a suit of readymade clothes.” In her melding of social and political, di Prima recognizes the scale of what overcoming our present situation means:

if what you want is jobs
for everyone, you are still the enemy,

The revolution, should such a thing be possible, cannot merely be a political or a violent uprising but entails a complete transformation of our social being and understanding of ourselves. “Coils of the unsaid” is one of di Prima’s terms for the weight of history, the threads that bind us from the dark. These social relations are what must be uncovered and unworked. For all the tautly constructed reprisals of US imperialism:

What was the gulf war but terrorism
wearing the death mask of order?

Throughout, the letters maintain a directness and volatility that speaks to the mimeographic origin of so many of the texts: works to be copied, handed out, recited, shared. The mimeograph as a material process also bears a formal resemblance to di Prima’s writing: bringing a flattened unity to cut and pasted text and images, uniting them on the same plane.

Bound up with the political dimension of the poems is the concern for a shift in our experience of time. The present time is often given an apocalyptic cadence, a time of ecological catastrophe, or else tied directly with violence. REVOLUTIONARY LETTER #78 subtitled “Bulletin,” is cut through with interruptive phrases that draw the time of the poem’s reading in line with proliferating deaths:

As you read these words it is already too late.
As you read this line one thousand have died of AIDS.
In the time you fill a cup they die of thirst.

The poem also demands the acknowledgment of the co-existence of these overlaid temporalities: “Do not think to correct this by refusing to read.” The resistant time offered elsewhere in the poems is one of seed planting and sexual activity, where “poverty will be abolished” and people “left to themselves” “share blankets, dope & children.” Its negative condition is the destruction of the self as constructed by and with capital:

Di Prima’s expansive utopian time is rendered not only with fervor but gentleness and humor too. The future America she envisions is a road home where “all the restaurants will serve miso soup” and the truck drivers “drive politely.” The practical routes for this redemption of time come in resisting labor and the erosion of traditional family structures, as well as through friendship, mutual aid, and kindness.

This tactical register of many of the poems, offering strategies for avoiding the law, stockpiling food/medicine and so on, coupled with the dispensing of practical, everyday advice, plays a vital role in anchoring the political thrust of the poems in the present. In doing so, they unsettle (though not always successfully) the tendencies of primitive secessionism, a reactivation of the deep past, and the great utopian leap into the future that threatens to pull apart the potential for political activity in two directions. Rather than inertia and nihilism, the poems in this way offer a counter-society, a contradictory unity of rebellion and plenitude, whose internal coherence and historicity coalesce as revolutionary hope.

For a project of such scope, and collected over such a long period of time, unevenness is almost impossible to avoid. Where the poems fail as poems, the negotiation of mood and structure has a tendency to be bulldozed by a political impetus that fails to tussle sufficiently with its poetic apparatus. This is one of the risks of the political: content overwhelms those structures that seek to circumscribe it. The weakest of the letters tend to be the shortest; di Prima’s voice is at its best working by accrual, the interplay of different registers, and is unsuited to truncation. A poem like #96, subtitled “Poem at Dawn,” that comprises a single statement across three lines:

Empire
is its own
undoing

has the declarative sloganeering elsewhere used to great effect, but offers little “undoing” of its own. Di Prima’s constellations need room to breathe.

Ultimately Revolutionary Letters stands as a vital contribution to American radical poetry. The thinning social texture of the political and atomization of the individual that have proliferated across the West in recent decades are cut through with images that self-ironize and mollify, a pluralism which so often offers healing only actionable in isolation. By contrast, in the best of the letters, the interlocking strata of meaning and form become textures of recalcitrance: a “cosmogeny / laid out before all eyes” that does its best to resist recuperation. Di Prima’s ability to dig at the coils of the unsaid with every tool to hand, be it an occult text, a recipe, a slogan, or the act of motherhood, creates a poetry capable of recognizing the dark character of our social reality without collapsing into cynicism. 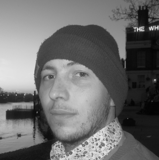 Daniel Fraser is a writer from Hebden Bridge, Yorkshire. His poetry and prose have won several prizes and been published widely in print and online, including: London Magazine, Magma, Los Angeles Review of Books, Aeon, Hobart, Poetry Birmingham, and Radical Philosophy. His debut poetry pamphlet Lung Iron is published by ignitionpress.