People see buildings with awe; they admire statues and paintings and stand breathless; they listen to music or read books and cry. Similarly, Renee Gladman is no stranger to stirring emotions with her art. Her obsession with blurring boundaries between drawing and writing does just that in Plans for Sentences.

This collection of art and writing “directly follows” her Prose Architectures, and is, in Gladman’s own words, “dedicated to the evolution” of her mark-making and her “devotion to the entwinement of drawing and writing.”  This book not only catalogs her unusual expression of language, but it also records her love of image. Gladman seamlessly weaves her sketches of illegible script with images and text typed on the page.

She begins the book with “These sentences—they—will begin having already been sentences somewhere else, and this will mark their afterlife, and this will be their debut.” This paradoxical statement lands powerfully. Language shapes its future at its inception through how we understand it, use it, and change it. The paradoxical notion of how language exists and lives is clearly demonstrated through Gladman’s unique style.

From the first stream-of-consciousness lines, Gladman explores meaning, structure, and syntax. Through blank space, sketches, and minimalist punctuation, she challenges the limits of language. Often she uses words whose meanings and usage readers are comfortable with, but she changes those words throughout the collection to bring readers to unusual understandings of those ideas. She employs anthimeria (using a word in a new grammatical form). She denominalizes nouns or creates new gerunds from verbs, and she does this with the pleasure that comes with complete surrender and abandon for reader and writer alike.

Consider the word “grain” in the following line: “These sentences will be housed among paragraphs that roll and grain; they will move vertically toward the sky, will grain, will void, amassing tiny statements.” When readers read “grain,” they understand its noun form (as in seed as well as grain of wood), but “grain” is used as a verb. Gladman treats “void” in a similar fashion here, using its intransitive form rather than its more common noun form. To compound the unique usage, just a few pages later, Gladman writes, “These sentences will tend the slow cleaving of the field; they will over and up, they will grain and cluster, they will ripple at the edge. They will void.” It is interesting to note the treatment of “over” and “up” as verbs as well, but readers are again reminded of seed “grain” when Gladman writes “field.” However, once again, “grain” is used as a verb. Gladman plays with the word “grain” 90 times and “void” is used 112 times throughout the book. Gladman uses many words in a similar fashion.

I call this runged repetition. Gladman’s use of abundant and unusual repetition of everyday words make these simple words take on intriguing new personalities. She uses a word until she has used every rung on its ladder of definition and pushes readers to understand words in totally new ways. The syntax is so uniquely wrought on the page that readers are engrossed in the puzzle and sound of it. With each shift in repetition, Gladman builds mystery as well as understanding. As she writes, these sentences will “loop the unknown and unfinish it” at the same time “these sentences will gather all the pauses into a flowing assembly.” When finished reading the book, readers “will antenna the unknown.” They will feel meaning rather than know it.

Gladman’s art also contributes to the sense of the work. While marrying script to sketch isn’t new, the way she handles the language and art together is. The collection is 159 pages long, but much is white space interspersed with 60 images (of over 137 from early drafts that began in 2016). The sketches are inked in sepia with a “TWSBI Diamond 580 AL fountain pen with (at turns) F, M, and B nibs.” Gladman’s handwriting-art seems to start, like her text, on the left margin and moves to the right, seemingly without taking the pen off the paper. Her drawings are fluid script that transform into chaotic loops and flourishes. The doodle-like art records what some might see as city horizons and countrysides, home interiors as well as complex gears. Sometimes a figure of a woman rises, mistlike, out of the loops and curls of the illegible handwriting that creates the image while other times shoulder-to-shoulder curlicued figures cheer from the stands at what might be a World Series game. There are blossoms and even a long-stemmed wine glass falling, bowl over base, down what seems like a flight of stairs.

Midway through the book, splashes of watercolor will surprise readers. The first and most predominant color to appear is yellow, like petals of a sunflower dropped and dried between the pages. Yellow is dashed around what I see as an old sailing vessel carved from Gladman’s cursive. I immediately feel hope at seeing the color. That feeling followed me through the rest of the book as it appeared at least ten times as squares, buildings, or even a thunderstorm at sunset. Gray, the color of indecision and the unknown, graces images at least six times. It might exemplify the opacity of her words. Green enters the text at least three times, and there are hints of pink as well. Red enters the work only once as pillars standing as borders between the art and the edges of the page, and although blue is only in the book three times, it seems more prominent than that, especially since the last image might remind readers of this globe we inhabit.

This book involves reader participation as much as it involves writer and artist. Readers must decide to pause at the end of a line to digest what they read or go on to the next. Then they must decide to stop at the end of the page or see the art on the next as a continuation of thought. We need to “sonar the sea” of this book and gather our own meaning. Ultimately, her words and art become something more together.

While tackling this book is no easy task, we don’t need the exact meaning spelled out for us if we can grasp Gladman’s ultimate message. The phrase “This sentence,” which Gladman writes 210 times throughout the book, could be code for any part of the human experience. Readers could easily substitute “This loss” or “This birth” for any “This sentence” throughout the collection and there would still be truth: human experience at its most blunt and most subtle, at its most intimate and universal. Reading this book provides an unusual experience as it allows readers to feel engaged, be alert, and feel alive.

At the exact middle of the book, Gladman poses the only questions in the entire collection: “Is it fine? Are you fine today?” There is obvious significance in those questions, especially since the text of the book was conceived in 2018 and was slated for publication during the chaos of a pandemic. While there are no references to the pandemic in this book, the connection cannot help but be made in hindsight. Gladman answers that chaos with the whole collection itself: We were. We are. We will be fine. 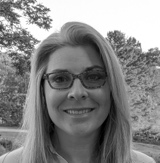 Julene Waffle, a Hartwick College and Binghamton University graduate, is a teacher, a wife, a boy-mom, a dog-mom, and writer. She finds great pleasure in juggling these roles. Her work has appeared in The English Journal, La Presa, Mslexia, several anthologies, and her chapbook So I Will Remember (2020). Learn more: www.wafflepoetry.com.