Frank Stewart’s artful Still at Large (El Leon Literary Arts, 2022) is a collection of found poems amended, lineated, titled, and arranged to illuminate the perennial presence of evil in man, which is “still at large.” He uses the voices of ordinary civilian suffering during war—it could happen to you!—to subtly invoke unimaginable horrors. His “poems/fragments”—the book’s subtitle—are taken from his voluminous reading, a list of which is shared at the end of the book, and each poem has its own quoted source. Such validation magnifies the impact of these tiny Sappho-like poems, each a window into a world you don’t want to be part of. Where other writers would have contextualized or placed themselves within the poems, Stewart offers up only authentic speech produced under extreme emotion. As the editor of eight anthologies and the massive Mānoa: A Pacific Journal of International Writing published yearly since 1976, as well as the author of five collections of poetry, Stewart infuses each of these excerpted lines with a poet’s sensitivity and an editor’s eye. Perhaps his translation of I, Snow Leopard by the indigenous Chinese poet Jidi Majia also influenced the book’s spareness.

The prologue of Still at Large, “For Now,” is set in 1940 at the Russian front, and is written from material found in The German War: A Nation Under Arms 1939-1945 by Nicholas Stargardt. Its couplets end with the riddle: “What is that which we hang onto / And which is snuffed out in a second?” Thus life is at stake in all that follows. The first atrocity the book memorializes is the Armenian Genocide that began in 1915, with poems so pared to their essence they have the transparency and resonance of the lived. In “Night’s” three brief stanzas, refugees march for five or six hours then collapse to sleep—but the Turks come for the girls. Everyone, including the policemen, resist. The last line is “and they didn’t take them, and no one slept.” These are the words of the town crier of Ayvalik, as told by his son and archived at The Greek Genocide Resources Center. The Armenian Genocide: Testimonies and the Eyewitness Survivors is the source for “I Tell You” in which a governor interprets the order “to kill the dogs” literally, and dogs are killed instead of Armenians. The poem ends with the kind governor commanding the Armenians to change their names. Such is the unexpected celebration of those in charge.

By the time “And Forever” ends the opening section, irony is firmly in view. The poem is taken from The Face of War by journalist Martha Gellhorn. Soldiers in the Spanish-American War tell her their trench is so very comfortable “they could stay there forever.” Stewart alights on such ironies even in his titles. Here’s “So” in its entirety:

It was all very quick.
We were ordered to watch.

And then we went back inside, as if
Nothing had happened.

The bloody 20th century progresses; the second section is compiled from World War II excerpts. The haiku-like lines of “Off the Coast, a Ship” come from the poem “A Coral Island” by Makiminato Tokuzo as translated by Stewart and Katsunori Yamazato. Its three lines consist of: “Agitating the heavy water, / Drunk on goblets of black crude, / A shark thrashes out to sea.” This could be a metaphor for the entire war in the Pacific.

Out of the many poems about the Balkans conflict of the 1990s in the third section, “On the Buses” is particularly vivid. Women must stare out bus windows at men with slashed necks” in order to identify if any are “their husbands, fathers, and sons.” Here’s also the emotionally powerful tiny poem “OK” in its entirety: “But please don’t ask me too much about that” spoken by Bosnian Timka Music and quoted from Selma Leydesdorff’s Surviving. The US doesn’t get a pass. The poem “Be” quotes from a recent New York Times article “Kentucky Police Training Quoted Hitler and Urged ‘Ruthless Violence’” with its telling line urging police that they should be: “Meeting violence with greater violence.” Near the very end of the book there’s heart-rending graffiti by contemporary refugees, culled from the wall of the Port of Zeebrugge police station as noted in the Journal of Refugee Studies. The last poem of the last section, “Decency,” is set at the Russian-Ukrainian border in 2014, a conflict all too contemporary. A soldier calls home and nine days later his mother’s told he died in “army exercises.” “When she asked, / “Do you believe the words you are telling me?” / He had the decency to reply that he did not.” Its lines are taken from The Road to Unfreedom: Russia, Europe, America by Timothy Snyder. Underlying all of Stewart’s selections is the complexity of the brutality, particularly evident in the book’s epilogue poem, “Someone from Pharae.” Who knew about the shame and trauma suffered by an assassin? A second century poem by an anonymous Greek, it ends with: “He cowered in his room / Like a bloodied cock dragged from the pit/ By its spurs.”

El Leon Literary Arts has beautifully published Still at Large with French flaps and illustrations by the most emblematic “artist of peace” in the twentieth century, Marc Chagall. The cover features one of Chagall’s couples floating in mid-air over Vitebsk, the artist’s village in Russia, leveled by the Germans by the time he finished the painting in the safety of New York City. The couple’s extraordinary placidity invokes our own, so seemingly safe in the face of the fascism that may be once again poised to destroy all of the ordinary. Still at Large confronts readers with the nasty conclusion that war has become more about the suffering of civilians than soldiers, and proves that cruelty in war is timeless. 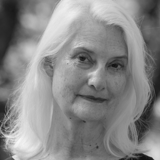 Terese Svoboda is the author of twenty-one books of poetry, fiction, memoir, and biography. Her most recent book of poetry is Theatrix: Poetry Plays (Anhinga Press, 2021) and two novels, Dog on Fire and Roxy and Coco are forthcoming.