Regrettably, somewhere along my journey as a mom of three under four, my Instagram feed became an unrelenting deluge of mostly contradictory, neutral-palleted parenting advice from sanctimonious armchair experts. Never rock them to sleep, that’s coddling. Cosleeping is nature’s way: look at this mother and son cuddling (lions). Force them to eat their veggies. Forcing them to eat is coercion. Holiday traditions are paramount. Santa is the patriarchy.

Every time I see one of these, I think: “Am I a good enough mother?” And I know I’m not alone in this self-interrogation. The intense pressure to attain this new version of motherly perfection—that is, to empty ourselves in order to fill our children’s every physical and emotional need—has made “mom guilt” an inescapable syndrome of modern day parenting.

How contemporary American society treats (and fails) mothers is at the heart of Jessamine Chan’s explosive debut novel, The School for Good Mothers. The story centers around 39-year-old Frida, the daughter of Chinese immigrants and a newly single mom. Insanely sleep deprived, fresh off a divorce, and struggling to juggle work with childcare, she has “one very bad day,” and as a result, loses custody of her toddler daughter Harriet. To be fair, her “one very bad day” is objectively very bad—she leaves Harriet alone in her ExerSaucer for two and a half hours while she goes out for coffee and to get a file from her office. The neighbors hear Harriet crying and call CPS. But what happens next takes Frida’s punishment to the extreme: she’s sent to a state-run, Big Brother-like institution that will determine whether or not she’s fit to be a mother.

At The School for Good Mothers, Frida meets a cohort of women (reminiscent of Margaret Atwood’s handmaids or the incarcerated women of Orange is the New Black) the state is also trying to “fix.” One mother is there because she posted a video of her toddler’s tantrum on Facebook. Another because she was on her phone at the playground. And another because she let her son walk home from the library alone. They undergo a year of isolation, emotional cruelty, and “mothering” classes (via some very creepy AI dolls that resemble their own children) and are evaluated on things like “affection numbers,” tantrum-quieting time, and grape-slicing skills. Everything is so data-driven it often feels capitalistic. And if Frida fails, she’ll never see Harriet again.

Chan’s pacing and tension are excellent—so much so that I felt myself propelled through the story as if it were a horror novel. The narrative is as ripe for a screenplay as a Liane Moriarty vehicle (Big Little Lies, Nine Perfect Strangers). It’s no wonder there was a mad scramble to acquire the TV rights. (Jessica Chastain’s production company Freckle Films ultimately beat out the competition.)

My reading experience was punctuated by sudden realizations that I was clenching my jaw and perhaps not breathing. Chan’s prose has that effect. Even when the writing is tempered on the surface, you can feel Frida’s darting eyes and primal twitchiness through Chan’s quick and skittish sentences. The resulting feeling is one every mother can recognize. After all, is there anything so primal as the threat of losing your child?

Though subtle, the novel’s interrogation of how race and ethnicity play into our scrutiny of mothers adds another layer of complexity and outrage. Frida’s parents are Chinese immigrants. Most of her relatives lived with her at some point throughout her childhood. In fact, her grandmother was her primary caregiver because her parents were too busy with their jobs as professors. Having extended family pitch in with raising children is a parenting model that’s not rewarded in the world of this novel (and one could argue, in America in general). It’s the nuclear family—and primarily, the mother—who is expected to shoulder it all, smiling all the while.

When Frida explains her childhood to the social worker, telling him that you “can’t judge [her parents] by American standards,” he comments that they “sound withholding,” and then he goes on to slap her on the wrist for failing to teach Harriet to speak Mandarin. She is expected to simultaneously embrace and reject her heritage. No matter what she does, she can’t win.

Given the last two years of pandemic hell, and specifically, the unsustainable expectations it’s put on working mothers, Chan’s novel could not be more timely or on point. Millions would be placed in The School of Good Mothers for screen-time violations alone. But beyond the sheer physical exhaustion we’ve all been enduring, Chan’s novel puts words to what often feels like a war on our souls. “Loneliness is a form of narcissism,” one of Frida’s instructors tells her. “A mother who is in harmony with her child, who understands her place in her child’s life and her role in society, is never lonely. Through caring for her child, all her needs are fulfilled.” Much like the AI robots at the school, we’re not supposed to express real feelings; we’re not supposed to have real selves.

There’s a dads’ reform school down the road too, though the rules are much more lax. They get unlimited phone privileges to speak to their children, for example, and aren’t required to do backbreaking cleanup work. The mistakes that land them there are also far more egregious. One father, who becomes Frida’s romantic interest, let his kid fall out of a tree while he was texting his lover. We can all head nod at Chan’s metaphor here.

Though the book is otherwise tightly plotted, I found myself getting impatient as we’re taken from lesson to lesson and injustice to injustice at the school. However, that may be Chan’s intended reaction—an avenue to mirror parenting itself. Despite all its joys and highs, motherhood can at times feel like a tireless slog, especially when you’re not feeling your best. (It’s smart that Chan imbued Frida with a long history of clinical depression.)

But as the instructors remind the students, there are no “sick days” when you’re a mother. They must “manage their frustrations. By staying calm, they’re showing their child that a mother can handle anything. A mother is always patient. A mother is always kind.” These lines, crafted through a dystopic lens, are things I swear I’ve seen on my Instagram feed. The novel is so chilling because it’s just a shade away from reality.

Frida’s battle to get her daughter back shines a spotlight on the unjust scrutiny aimed at mothers everywhere—especially if they aren’t rich, white, or free from mental illness. And although the novel is a haunting, dystopian tale, it’s a balm to have that aspect of contemporary motherhood illuminated. Chan’s book raises the question: what would happen if society supported, rather than judged, its mothers? But more than anything, it made me want to wake up my sleeping children and hug them tight. At the end of the day, love is bigger than judgment, and what’s inside the family is stronger than the forces outside of it. 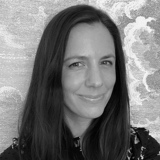 Jennifer Pollock is an Oakland-based writer whose work has appeared in The Washington Post and ScaryMommy. She is currently pursuing her MFA in fiction at St. Mary’s College.