Originally released in the United Kingdom, Kerri ní Dochartaigh’s debut memoir Thin Places chronicles both the author’s childhood during The Troubles in Northern Ireland and the lingering trauma she experienced. Ní Dochartaigh’s deep connection with nature aids in her recovery, manifesting on the page as a rich combination of autobiography and natural history that earned the author a place on the shortlist for the 2020 Wainwright Prize for UK Nature Writing.

Born in 1983, Ní Dochartaigh grew up in Derry, Northern Ireland, the child of a Catholic mother and Protestant father whose interfaith marriage consigned the family to alienation on both sides of the decades-long struggle known as The Troubles. As the neighborhood around the author’s childhood home erupted in a series of bloody attacks and reprisals, she sat in the garden behind her council estate and examined the world at her small feet.

“I hope you never find yourself in a situation where you need to protect a child from witnessing bloodshed in the very streets on which they have no choice but to live,” she writes. “But if you ever should, I urge you…Just find them a way to sit in the muck, as creepy-crawlies do their do, as bees buzz through holes in concrete walls, as spiders build webs on empty coal bunkers under a sky that—no matter how grey and uncertain—holds room for butterflies, moths, dragonflies and things too hard to find words for.” That garden was the first of many places where nature “opened itself up” to ní Dochartaigh even as the world around her raged, and over time the ritual of returning to the land became key to the author’s survival.

Ní Dochartaigh learns of nature’s power to heal from her grandfather: “The places he spoke of were locations where people felt very different from how they normally do. Places from which people came away changed. In these places you might experience the material and spiritual worlds coming together.” The author calls these places “thin places,” places that lift us up out of ourselves while simultaneously returning us to ourselves, that connect us with something larger than our living bodies and in so doing relieve us of earthbound concerns, that link us across time and space to all that ever was or will be. Though initiates will have no trouble digesting ní Dochartaigh’s ecstatic proclamations and spiritual bent, skeptics need only look to the mounting scientific evidence linking experiences of nature to lowered levels of stress as proof that the author isn’t just leading us down the garden path, as it were.

Stress was certainly pervasive in ní Dochartaigh’s early life, the family moving from house to house as they tried to find a neighborhood that would accept their blend of religious—and thus political—affiliation. Perhaps the worst example of this torment happened when the author was eleven and a homemade pipe bomb was thrown through her bedroom window, nearly burning the house to the ground. The nightmares that followed, dreams of a human-sized “coal-black crow” who taunts ní Dochartaigh while the room around her burns, persisted for years, trailing the author from flat to flat no matter how far from Derry she ran. “The only time I ever made him disappear was when I drank,” she writes.

Though ní Dochartaigh’s story does have its successes—she survives The Troubles, graduates from Dublin’s elite Trinity College, builds a career—the personal losses accumulate. Communities and families rupture. Close friends succumb to wretched and untimely deaths. Alcohol abuse and debilitating depression are pervasive. The book is not always an easy read, as its emotions are heavy, but it works its magic when the themes coalesce—ní Dochartaigh’s connection to the natural world rising every time her personal world seems about to sink. And it’s in these moments where the writing is at its most revelatory, as when a fox shepherds the young author and her brother safely home one night after her father has abandoned the family, when spied herons make the author feel she’s “in the right place at the right time,” or when a dragonfly calls the author back home to Derry to finally confront her past. And always the sea: “I am often led into the sea, as if by a singing that comes from elsewhere,” ní Dochartaigh writes. “I swim out to meet that song, finally giving to the water all those things that were never mine to carry. In those moments of full and hauntingly cathartic surrender, when I finally lie back, sky-gaze, salt-touch, fluid-embrace, I meet myself again, as if for the first time.”

At its simplest, it’s easy to read Thin Places as a looping chronology of the writer’s life and the unique way she overcame personal tragedy, but I read it more as a hymn for the natural world, for all it can do and has done for us, for the profound renewal, however trite that may sound, that can be found there. “There are places that are so thin that we see right through it all, through the untruths we have told ourselves about who we are,” the author writes. “We see through every last bit of the things that we once thought defined us. We see that, like a landscape that has undergone vast and irreversible shifts, we, too, might be capable of change.” Ní Dochartaigh’s recovery was neither swift nor painless, but recover she eventually does, and her forays into the natural world are key to her triumph.

It’s all the more sad then, to think that these very places that restore us are themselves at risk, are as cracked and cratered as we are when we return to them keening, as climate change threatens to upend all that ní Dochartaigh and so many of us hold dear. This eco-grief is given small mention in the book but looms always in the margins, a dark cloud on our world’s horizon that we must attend to but for whatever reason don’t. “I am still that wee girl seeking beauty in the murk,” ní Dochartaigh writes toward the end of Thin Places. For the sake of all the life and lives around us, would that we’d all be a little more like that wee girl, too. 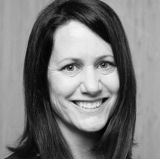 Christa Laib is pursuing an MFA at St. Mary’s College after decades of work as a copywriter and editor. A California native, her stories are rooted in the western landscape and explore themes of constancy and impermanence, germination and decline. She lives in Berkeley, California with her husband and daughter.