Yi Won is a South Korean avant-garde poet and essayist, born in 1968 in Gyeonggi-do.

E. J. Koh is the author of the memoir The Magical Language of Others (Tin House, 2020), winner of the Washington State Book Award and the Pacific Northwest Book Award, and the poetry collection A Lesser Love (Louisiana State University Press, 2017), winner of the Pleiades Press Editors Prize for Poetry.

Marci Calabretta Cancio-Bello is the author of Hour of the Ox (University of Pittsburgh, 2016), which won the Donald Hall Prize for Poetry.

The World’s Lightest Motorcycle features inventive, daring, and subversive poems that confront a wired, technological world, often in the mirror.

Tiffany Troy: What is the act of literary translation to you?

Marci Calabretta Cancio-Bello: There are a lot of things tied up for me in the act of translation. It feels like home to me. Korean is so different from English, and in some ways, I feel really uncertain, especially when I’m first starting a piece. But there’s something about that unfamiliarity that makes it feel familiar, like good work.

E. J. Koh: I’m on that same path with Marci. It took me years to realize that translation is something you do with both your mind and your heart. Translation is an act of love. So no matter the research and work and collaboration, at the end of it all, you want to translate with less of the mind and more of the heart. When Marci talks about relationships and responsibilities and the way we care for each other, it all comes together for me.

TT: How did you get into Korean and into literary translation?

EJK: During my youth, I lived in the States without my parents. My Korean then was at the level where I could read, but I would have to read it out loud, then I would have to hear myself reading to understand the words. It was a doorway to my parents because I learned Korean through my mother’s and father’s voices.

I don’t think I’d ever thought about becoming a translator. I went into poetry, and when I was in my program, I met a teacher who told me: If you want to be a good poet, write poetry; if you want to be a great poet, then translate. It became another door I walked through without thinking about what it means and where I could go. I heard it and I responded, because a part of me felt ready to walk through anything.

MCCB: I’m a transracial adoptee. I was born in Korea and raised by non-Koreans, so I didn’t have access to the language at home. I am always curious about how language informs who you become.

When I was a teenager, my family moved out of a very rural area to a place that had a small Korean student population and a Korean church that was offering Korean lessons. I took those as a teenager with all these tiny children who were learning the alphabet.

It wasn’t until E.J. and I started working together that I ever thought I could translate. I had teachers, similar to E.J., who believed in translating as part of one’s poetic practice. But I always thought you have to be as fluent in that language as you are in the language that you are translating into. And I thought I could never be fluent, so I just assumed translation was not going to be an option for me. But digging into translation made it feel possible.

I had been hoping to be able to connect to Korea in some way. I wanted to know the fairy tales and the songs and the history of Korea. All of that gets combined in poetry and informs so many of the poetic decisions, which in turn inform the translation decisions. It feels like I’ve been slowly moving toward translation my whole life, whether I realized it or not.

TT: What draws you to the work of Yi Won?

MCCB: I like the way she thinks. She does things I don’t know how to do in poetry. She creates infinite curiosity in me, and her perspective of the world is so vast. It’s exciting to see how she could influence my work, but also American poetry.

EJK: Yi Won as a writer and thinker has created new relationships among translators. We’re all connected. Don Mee Choi translates Kim Hyesoon’s work, and Yi Won is a successor to Kim Hyesoon. We met Yi Won through Don Mee Choi through Kim Hyesoon. There is a Korean women poets’ community across the Pacific. There is a sisterhood. It’s a part of the home that calls to me when I hear Marci talking about home and finding a place.

EJK: There’s history too. Marci and I met at Kundiman, and we loved each other right away. She helped me revise my poetry book, and we shared work for so long that we’d already been writing through and with each other. So by the time we met Don Mee, it seemed natural.

MCCB: We were very open with each other in communicating and revising and working around each other’s lives. We also really trusted Don Mee as she mentored us through the process. Her name is not on the cover of the book, but it’s just as much her book. Yi Won is part of the collaboration process too, and we could ask, “What do you think of this line,” “How were you thinking,” “What did you mean in this image?”

A lot of our process is anchored in shared respect. We respected each other, we respected the work, and wanted to do right by it. The collaboration brought me a lot of delight and made me think differently about poetry itself, not just the translation process.

TT: How do you approach translating Yi Won, with her emphasis on images?

EJK: Yi Won’s images sustain themselves and never end. When working with Marci, we simultaneously question ourselves and trust each other. It becomes a conversation. We’re not pinning things down but looking at what Yi Won’s doing, then holding a light to it. The translation process is about allowing parts of Yi Won to come through and expand to have further possibilities.

I love that Yi Won says when she teaches her students, she is giving them more eyes. We have several eyes that look at ourselves and each other. We are using everything we can. In a way it was from the us. In a way it was from the earth. Whatever arose, we let that happen. That sort of relationship to translation is vulnerable and sometimes terrifying, but that’s what makes it exciting.

MCCB: I agree with that. We talked a lot about the many forms of accuracy, not just language proficiency. Once you feel you understand the literal, then you have to make a poetic leap. You have to trust that leap, and sometimes you can’t do that without time and other people helping you think through this process. Sometimes we needed to translate more poems to understand what we were translating, which is why we included some of Yi Won’s poem series, like the “Motorcycle,” “Nike,” and “Mirror” poems.

When you’re championing someone else’s work, there’s no room for your own ego. There’s only room for the best parts of you to come forward for it to become its best translation.

TT: Do you have any advice for budding translators?

EJK: Something I hadn’t come to until I left my first years of translation—understanding what the act of translation represents with the language you’re translating from and into, especially if those languages are tied to countries, and those countries have specific histories, and those histories have a relationship with each other. In this case, understanding that Korean is a historically non-dominant language and English is a historically dominant imperialist language is important. I have to come to terms that English is also the language I work in. It’s the language I write in and so I am aware of its ability to erase. English demands to be read in a way, as if what you’re translating from was written originally in English.

Just as Marci said, it’s about asking those questions and seeing that translation isn’t an insular thing but reaches out and touches everything you do, everything you work on and even your everyday life. Observing these things, how do you continue your work?

MCCB: I agree with what E.J.’s saying about understanding the history of the country and where that poet is situated in that history, which naturally extends to where you see yourself as a translator situated in your own country’s history and language. This process made me think more carefully about how language influences and is influenced by everything.

Be patient, because the thinking takes time. It can’t be rushed. I’m grateful that this book took five years; sometimes we worked on poems, and then a year later, we changed things. Patience allows you the space to change your mind, and means a lot of different things in this process, including actively asking questions. It’s not just a word-for-word translation, there’s got to be some essence in there. Some really big well-lived part of you is in that piece, in the same way the author has put so much of their own spirit into the poems. I would like to have told myself early in the process to be more patient in doing right by the text. 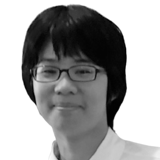 Tiffany Troy is a critic, translator, and poet.