For some, the creation of the first drone might have been a work of art, something beautiful in the lines of its engineering and the miracle of its flight. For others, it is forever impossible to entertain the notion of a drone being beautiful, especially for someone who sees that drone float above their home, death hanging in midair, an image of terror on the horizon. One might argue that any instrument of death and destruction holds this power, the balance of both beauty and terror.

In her new poetry collection, Love Letter to Who Owns the Heavens, Corey Van Landingham weaves these threads in a narrative of past and present conflicts, tools of war, and the paradox that exists in “how we have in us a taste for beauty and for / terror.” Van Landingham examines the separation from the human, from compassion, and from death that people have created through technology, especially with drones. Three lines emerge from the poem “Spolia” to center this collection:

Like nations, love
we grow from our own
vanquished pasts. Consider the way

Through these lines, Van Landingham crafts a theme that continues throughout the book: the concepts of nations, the concepts of war, war as an expression of love, and war as an intimate act of horror between nations and people. She writes and breaks her lines purposefully, using enjambment to create subtle explorations of these subjects and the self. Time and again, she highlights the recognition of our own conscious embrace of beauty and the “familiar figuration /  of terror” that humans have constructed, lovingly, from past conquests and humiliations.

As the poems continue to unfold, the reader is called to reflect on the evolution of technology in our daily lives and how tools of war have evolved. The reader can’t help but question: does the glorification of war create a terminal cyclical effect of warfare that seeks to “unmake” us? Do we admire and idolize those who fought wars for the simple fact that they fought, no matter what side they fought for? Do we walk through Civil War battle visitor centers to learn a “new / way to fix the past as if it / weren’t always lapping back / into chaos”? Do we, as Van Landingham says: “make of suffering a still life?” something akin to Banksy’s The Banality of the Banality of Evil, the epitome of self-referential, pastoral beauty bound by an aspect of terror?

Some of Van Landingham’s poems weave us along in a train of thought about drones, cellphones, wars, life, and love. Others give us a point of reflection, and some flat out gut-punch the reader with the challenge of their sincerity. Most striking are her poems referencing the Civil War, which face the reality of the past and the banality of evil. And some of her most effective poems are those that feature confrontations with the drone. She writes: “Show me my worth, drone,” as she dares the drone to come down from where it is hiding, circling, seeing. The poet is now both a champion and a conduit for the reader, present, but at a distance: the voyeur, the connoisseur, the collector viewing the art, witness to the action, writing a vanquished history.

The problem might be that art outlasts us. That
it casts us for a future eye. That it unmasks us
before a people we never knew.

By writing herself into this world, Van Landingham immerses the reader in the paradox of internal and external exploration in the same way the drone looks at the world through the camera lens from above the clouds, immersing its operator in a world of war that is both intimate and distanced. It is a world that is “tiring already of our astonishment” and the wonder we once held for feats of engineering give way to a monotony of technology and a resignation to terror.

And yet, even in this, the poet gives us a moment to reject this numbing experience by saying she is tired of all the “not-saying”

And forces us to question our own role in technology: How much do drones see? How much do we see? Do they see a person pick a fig and eat it, as Van Landingham envisions in her poem “Love Letter to MQ-1C Gray Eagle?” The fig, I believe, is a reference to the Middle East, as Van Landingham refers to that region throughout the book, especially as the U.S. has used drones extensively there. The intertwining of the conflict in the Middle East in the poetic narrative is part of Van Landingham’s commentary on war, though the book is not limited to any one region or battle. Rather, it is an examination of wars and how we fight them. This book is a timely read when thinking of Ukraine as well, especially thinking of drones and what they can do and what they see. Do they see the smallest of actions in our daily lives and which of those matter to the drone or to the watcher? She continues:

to my cat, then cry in the shower after. I’m often
sorry about what I do, even if I don’t stop my actions.

And now, the reader is truly forced to wonder: are we sorry for what we do, even if we don’t stop our actions? Do we wage wars, fight wars, watch wars be waged, kill innocent people from a distance, and accept that we do these things even if we are sorry for doing them? Perhaps killing at a distance is easier, keeps individual soldiers safe, allows for terror to be elsewhere while things stay beautiful at home. That perhaps is the banality of evil and the balance of beauty and terror within human beings.

The last poem in the book, “Love Letter To Who Owns the Heavens,” summarizes the intensity and emotion that brought the reader to its brilliant conclusion. Van Landingham closes:

their own hands. I’ll remember the words I once
had to give you, on the porch, in private.

So much is evoked just from these last lines: the drone kills from afar; we are always being watched; now we see, hear, and know each other through devices; the words I once had to give you were just for you, just between us, intimate. Van Landingham’s work dips in and out of this personal relationship and interweaves the larger landscape of the history and presence of war. She provides a visceral juxtaposition of art and poetry, love and murder, making the reader question the banality of evil and that delicate balance between beauty and terror within our own selves. 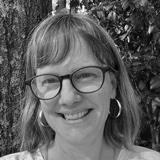 Liza Wolff-Francis is a poet and writer with an M.F.A. in Creative Writing from Goddard College. She was co-director for the 2014 Austin International Poetry Festival. Her writing has been widely anthologized and her work has most recently appeared in Wild Roof Journal, SLAB, and eMerge magazine. She has a chapbook out called Language of Crossing (Swimming with Elephant Publications, 2015).