“Space Music” is a poem about language. Within the mundanity of our lives, we wake up early, watch the news, go to work, come home, binge watch our favorite shows, then fall asleep. Language, too, is a routine we have become accustomed to. The familiar greetings, “What’s up?” or “How are you?” aren’t necessarily questions that beckon honest responses, but placeholders for “Hello.” What is interesting is when new concepts and ideas are adopted into mundanity. Lately, a common greeting I have been receiving is, “Did you hear about the mass shooting yesterday?” A phrase said so often now, it has become a part of ordinary American life.

The poem began with the line: “On the news, the anchor speaks a massacre.” This line went through several rewrites, previous versions being “The anchor speaks of a massacre” and “The anchor talks about a massacre.” The removal of the preposition opened the poem up to a new possibility. A massacre was no longer what was being reported, but the very language being spoken. I discovered that when writing, I was writing in a collective American dialect, which is to say I was writing in a language of violence.

Of course, I didn’t want the poem to exist entirely in that space. Speaking through violence is incredibly damaging for the writer and the reader, so after writing that section, I had to step back and say to myself, “Okay, but now what?” As poets, I think we spend a great deal of our time not only investigating the world but also interrogating ourselves and, more importantly, our intentions. I didn’t want the poem to be solely a recognition of violence. I didn’t want it to be nihilistic and bleak, but I also didn’t want to shy away from something that I felt was important to say.

The overarching question was “Why is art important?” Obviously, this question isn’t a novel idea, but I think it’s always worth considering when making art. Often, I find it difficult to locate the importance of art outside self-satisfaction or a simple means to record human history. Rather than focus on the knowledge I didn’t have, I looked to what I did have. On the page, there was mundanity becoming synonymous with a language of violence. There was fear, death, and allusion to mental illness. The poem, at that point, was ultimately what I didn’t want it to become: a message that was merely reestablishing the language of American violence.

However, poetry not only reestablishes language, it also reinvents, reclaims, and redeems it. The poem is written in sections because I wanted language redemption to visually appear as a step-by-step process. I couldn’t look at the poem in its larger thematic context, only through its small utterances of realizations and discoveries. What I found when writing the last section (though I didn’t know it would be the last section at the time of writing it) was the answer to my question, “Okay, but now what?” and it came out in the line “Down the hall, the past is barking at the front door.” Like our familiar greetings, “The past” is such a familiar phrase and brings with it preconceived notions and interpretations. If every word and phrase is a room you can walk into, “the past” is your childhood bedroom with all its familiar artifacts. Pairing “the past” with the unlikely verb “barking” is like returning to that same room to find that the bedside lamp has been replaced and now the lighting is slightly different. You must reacclimate and relearn what it means to be in this space if only for a fraction of a second. Doing this on a syntax level not only has us reconsider the meaning of a word but also breaks us out of mundanity and, in the context of this poem, breaks us out of the language of violence. And that’s what I wanted the last section to be—I wanted poetry to redeem language. 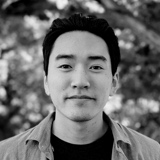 Mark Kyungsoo Bias is a Korean American poet, educator, and adoptee. He is a 2021 Tin House scholar with poems appearing in Asheville Poetry Review, Best New Poets, The Common, PANK, Raleigh Review, and others. He is currently an MFA candidate at the University of Massachusetts Amherst and a consultant at GrubStreet.