Looking at the cover, Joshua Nguyen’s debut poetry collection, winner of the Felix Pollak Prize, seems to take itself seriously: its title, Come Clean, is the lorem ipsum of a police interrogation room or a Christian confessional, and the image behind it—a man with his head plunged underwater, eyes solemnly closed—could be a baptism in media res.

The expectation is severity, and some of the topics Nguyen’s poems broach—recovering from sexual assault, balancing assimilation and heritage, enduring racial fetishization—deliver on this promise. In “A Failed American Lục Bát Responds,” the speaker is the eponymous Vietnamese poetic form, pondering how legacy can last in the context of imperial hegemony: “If the libraries burn, / who will think of me?” In a direct aside to Keats, it reaches 19th-century levels of sentimentality, referring to a “Grecian urn devoid of my ashes.” This tension between the past and present is the central conceit in the background of Come Clean: How do we preserve memory, the archive of our lives, without being shackled to it? What can we do to recuperate from trauma—sexual, colonial, and otherwise—to move forward with our lives? Where, if it exists, is the way through?

Not everything is so life-and-death. What stands out most about Nguyen’s writing at first glance is its levity—not the cleansing needed for moral absolution, but that of the quotidian: meal prep, laundry, gossip. The premises of these poems often feel like a mirror of the sheltered, mundane life during the pandemic that Nguyen simultaneously raises the stakes on and pokes fun at. The self-explanatorily titled “In the Bathroom after Eating Flaming Hot Cheetos” turns junk food binging into a cosmic act of self-evisceration (“you are the creator,” “there is still time to set / your whole self on fire”) before ending with a would-be commercial tagline (“& that is flaming hot”). Despite and because of the dire, bleak circumstances of the pandemic, Nguyen isn’t afraid to diffuse the atmosphere with a joke; as he said in a recent interview in Poets and Writers, “During these dark times, I need laughter more than ever.”

A handful of the poems in Come Clean are culled from Nguyen’s chapbook, American Lục Bát For My Mother, which was primarily based on recipe directions. In writing about food, Nguyen treads the line of creating what Frank Chin called “food pornography,” the sort of culinary tales that sell ethnic heritage and dishes as a product easily palatable to the mainstream—akin to today’s “boba liberalism.” But Nguyen captures the depth of food by turning cooking into a tableaux of maturation and tenderness. From “American Lục Bát For Peeling Eggs”: “Love, you are old / enough now to unfold the skin / back on these white shells.” From “Thịt Kho”: “Miles away, my mother is laughing / once I swallow my pride & call.” The focus is on the process, not the product, on the investment in the family, not the free market—which is perhaps the most radical action one can take under a cruel capitalistic system.

With his gaze focused on the everyday, Nguyen’s writing is often plain and direct, though seldom austere like the obits of Victoria Chang. The effect is two-pronged: the simplicity gives the poems a conversational feel, especially at their comedic turns, and makes the subtlest changes in syntax and tone more impactful. “Vietnamese Bedwetting Stories in a Double Haibun” channels Kaveh Akbar’s deadpan humor, beginning with a smiling cringe: “once [] I made a mess of myself [] turned the white Power Ranger [] yellow.” On the other side of the emotional spectrum is the collection’s frontispiece, “Save Me, Marie Kondo.” The poem is partitioned into three sections, each by a double-bracketed “or,” and words rearrange and dissolve after each “[[or]]” as if the natural entropy and erasure of time were happening in front of the reader’s eyes:

I open
my jaw to a framed photo

of a grandmother I know
from my first memory:

…
I open
my jaw to a grandmother
from my first memory—
…

Memory [is a grandmother’s jaw]:

The shortening line length and compressed syntax leading up to the last lines make the final section even more emphatic. Memory is not a mental abstraction, but a corporeal, frangible object—one that can be broken and disordered.

Nguyen’s form also feels inventive, turning regular objects into spaces of interiority. “Google Calendar for My Imposter Syndrome” is, as one might expect, a black-and-white print-out of a Google calendar, but its expected organization becomes cluttered with the self-doubt of an internal monologue. He describes his class “Intro to Grad Studies” as a crash course in “How Not to Sound Stupid Talking About Dead White Men,” and workshop feedback is alternatively titled “Comments For Other Poets Who Are Better Than Me.” “Marie Kondo Is My Hero: On Organizing Christmas” reveals itself slowly in a 6 x 2 grid of rectangles repeated over the course of three pages, fragments of phrases appearing with each page as if each box were a present being unwrapped.

The narrative of the speaker’s sexual assault—the collection’s main focus—unravels in a similar episodic fashion throughout Come Clean. “Bunk Bed,” the first iteration of the memory, offers a synopsis of the traumatic interaction and concludes with a feeling of paralysis: “The first time I had oral sex, it sounded nothing like my parents.” This is the digestible form of trauma—contained and stowed away with a beginning and an end, as if the entire poem were enclosed in brackets, boundaries clearly demarcated.

Gradually, however, the structure starts to disintegrate: the next recollection, “Marie Kondo Is My Hero: A Lesson on Clothing,” is still partially composed of sentences, but the words are splayed across the page before sputtering in alphabetized repetition. The iteration after that, title poem “Come Clean,” fractures the story into fragments of sensory details and puns, the cyclicality and subterfuge of trauma—how the memory reproduces itself in innocuous contexts, here linking sexual assault to the sound of the word “wash”—made manifest sonically. In real time, we as readers see how the past is amorphous and invades present-day life, superimposing torturous affects on everyday objects—the same sleight used in “Save Me, Marie Kondo,” applied on a macrocosmic level.

The culmination arrives in “I Don’t Trust the Dishwasher,” which begins as a critique of the titular machinery before evolving into a mediation on religion, familial love, race, and consent: “Trauma in the shape of steam,” Nguyen writes. But near the poem’s end, he returns, once more, to the image of the dishwasher:

I leave the lid cracked open, to air
out the debris. To allow the past to dry

on its own time. The methodical process
of wash, rinse & place: I cradle every dirty dish in the sink.

If memory can be shattered and disruptive (as it is in “Save Me, Marie Kondo”), the inverse holds true here as well: that, with patience, the past can be restored and organized, cleaned and made sense of. For Nguyen, healing has no secret path, but is an act that occurs with each day in celebrating the emotions of our present selves—the laughter, ire, and lust that reminds us we are here, in this body, today. The poems that depict food and chores between the collection’s more severe pieces are just as important because they render joy and melancholy from the most mundane sights. Each day is endowed with the opportunity to find beauty in plain sight, to grasp hope in something as simple as cleaning a plate. 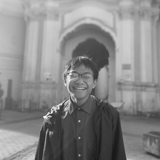