How do mail carriers resist the urge to dig into the bags they haul, to rip open a few secrets and stories, promises and fears? In his newest collection of poetry, Constellation Route, Matthew Olzmann fashions a mail bag of his own and invites readers to rifle through it. The poet welcomes us into his postal fantasy with an epigraph from Herodotus, whose “Neither snow nor rain nor gloom of night…” has become synonymous with the U.S. Postal Service.

Within Constellation Route we find epistles spanning as wide an array of addressees as we might expect from a randomly selected handful of daily mail, if more imaginative: letters to William Shatner, to a cockroach (“Now Dead and Mixed into a Bar of Chocolate”), to the Connecticut River Monster, and beyond. While these letters occasionally attend to major concerns such as systemic racism, food insecurity, and climate change, Olzmann’s voice is most focused and distinct when he is recounting everyday anxieties, a theme consistent with his previous collections, Contradictions in the Design (2016) and Mezzanines (2013). Olzmann is a master of the mundane, which may well be why the everyday (but absolutely crucial) service of the mail attracted him as a construct in the first place. His poems rarely rage; instead, they hum with a steady live-wire panic that resonates with readers such as myself, for whom life can be a constant search for enough good to get to the next day. In his “Letter to Bruce Wayne,” which vaguely indicts our country’s general xenophobia and the way “supervillains / look like everyone else,” Olzmann says:

In the battle of Good versus Evil, I was so sure
Good would win. Now I just hope something Good will survive,
get a job cutting hair or selling cars, make it home for dinner.

In the same vein, Olzmann intuits when to stop short of providing false hope. His wry humor keeps his tone from crossing the line into bleak; he is simply looking for answers alongside us and won’t pretend he has found them. Consider these lines from his title poem:

In moments like these, I want to believe
in a cosmic plan, a higher power orchestrating it all,
that every blunder has a reason built inside it.

The Terracotta Army and penicillin were discovered
by accident. Same with nuclear fusion
and the inventions of rubber and the microwave oven.

I am good at accidents.
Less good at finding meaning in them.

In 2022, Olzmann’s is a voice that we need to hear—one that neither coddles the reader nor refuses to name its mounting frustrations.

The collection’s mail service is not one-sided. In his “Letter to David James,” Olzmann invokes “Speakers speaking directly to things / that are never going to answer,” but in the case of Constellation Route, what could have remained a simple collection of outward-facing prayers and dispatches to canyons, trees, and “the horse you rode in on” reaches a new level by finding ways to receive responses. In some cases the answers arrive through actual missives the poet has received from friends and family, including wife (and poet) Vievee Francis. These answers are reconstructed into found poems that often teem with friendship and intimacy, as in “Letter to Matthew Olzmann from Cathy Linh Che on Saintliness”:

…it’s hard to think about the afterlife.
What kind of place is that? Maybe it’s
a house among the Blue Ridge
Mountains where Vievee made Texas-style chili,
read my Tarot, and talked about a bear crossing
the front porch. Maybe it’s your one bedroom
apartment filled with books, above
a coffee shop in Detroit. (Thanks for letting us stay.)

At other times, continuing his search for daily marvels and a god or two, the poet receives letters from the perspectives of traffic lights (“Wait here, I say. Go ahead, I say”), a flock of pigeons (who are credited in the acknowledgements), and a flying saucer:

We’re saying step into the light, son.
Never mind that you’ve doubted
whether or not the light is real. What is doubt, son?
You have a chance to be hauled into the sky.

There is, too,  a “Letter to Matthew Olzmann from the Roman Empire,” whose grand pronouncements suggest that life begins “with a cry that soars like / a bald eagle” but, because the poet is always keeping the mundane in sight, “before you know it—Visigoths // scrabble the horizon and your garage needs a new roof.”

The connective tissue between these perspective-shifting epistles—shuffled into four sections but with an even tone across the collection—is a series of poems inspired by a glossary of postal terminology. Olzmann borrows often obsolete mail service terms such as “daylight container,” “Day Zero,” and “wing case,” correctly defines them for us, then promptly ignores these definitions and imagines his own. These poems act not only as examples of Olzmann’s deft and offbeat wit, but many are standout poems within the collection. For instance, to the postal service, a “phantom route” is simply a dummy route that no mail carrier uses. Olzmann gives us ghosts.

There are things I’ve wanted to say to you, times
when I had no words—Love,
I will be swept from this earth, erased—
and if I ever find a way,
these are the only messengers I’d trust:

a scrap of newspaper kicked up by the wind.
Taillights disappearing over the ridge.
A knock on the door when no one’s home.

A “star route” is another such obsolete postal term, which Olzmann expands into his “Constellation Route,” a poem whose “car windows open overnight in the rain,” “tangle of lights resisting / all interpretation,” and wish for “a message, a divine code, a map / back to Asgard, Eden, or Detroit” skillfully encompass the urges of the entire collection. Matthew Olzmann may not have all the answers—in fact, he’d likely be the first to tell you he does not—but Constellation Route spreads enough light to guide us through the gloom of night and into the minor miracle of tomorrow. 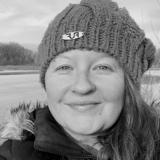 Erica Reid lives in Fort Collins, Colorado; she is an MFA candidate at Western Colorado University and serves as assistant editor at THINK Journal. In 2021 her poetry won the Yellowwood Poetry Prize and the Helen Schaible Sonnet Contest (Modern Sonnets category), and was nominated for a Pushcart Prize.