Grant Faulkner is the Executive Director of National Novel Writing Month (NaNoWriMo) and the co-founder of 100 Word Story. In addition to All the Comfort Sin Can Provide, he’s published Fissures, a collection of 100-word stories; Nothing Short of 100: Selected Tales from 100 Word Story; and Pep Talks for Writers: 52 Insights and Actions to Boost Your Creative Mojo. His book The Art of Brevity is forthcoming in 2022. Faulkner’s stories have appeared in dozens of literary magazines, including Tin House, The Southwest Review, and The Gettysburg Review, and he has been anthologized in collections such as Best Small Fictions and Norton’s New Micro: Exceptionally Short Fiction. His essays on creativity have been published in the New York Times, Poets & Writers, Lit Hub, Writer’s Digest, and The Writer. He also co-hosts Write-minded, a weekly podcast on writing and publishing. Follow him at @grantfaulkner on Twitter and Instagram.

Darley Stewart: It feels like the concept of sin shifts a lot throughout these stories.

Some of the sins in All the Comfort Sin Can Provide are more prosaic—they’re familiar, almost expected (like the husband who cheats on his wife in “Mr. American”). And in “The Names of All Things,” we get a different picture of sin. The main character feels at war with his Lutheran upbringing and you get this sense that he thinks of himself as a kind of philosopher (but is almost comical in his philosophical grapplings). His sins are less prosaic—you wouldn’t expect a high school math teacher to just run away with an underaged student—you’d expect him to exploit her, then go on with life as is. Who’s the bigger sinner in this story, though—the teacher who poeticizes his relationship with an underaged student, or the dad who didn’t properly care for his daughter?

I’d love to hear about how the concept of sin made its way into your collection and how you feel about your characters.

Grant Faulkner: The title of the collection comes from the story “Morphine Drip,” where a father is on his deathbed, mumbling through the memory of a hidden homosexual tryst to his son. “Never underestimate the comfort sin can provide. A lifetime of bedtime stories all to your lonesome,” he says. So the collection starts with that question: how much comfort, if any, can sin provide?

Bringing these stories together under the title All of the Comfort Sin Can Provide made me think more deeply about the meaning of the word “sin,” both in its religious sense and its more secular and casual usage (which is where most of my stories reside). I’m not religious, and I haven’t been religious since I concluded that God didn’t exist when I was 15, but once you’ve believed in God, they never truly go away, which is one thing Jim is grappling with in “The Names of All Things.”

There’s the line in “The Names of All Things” where Jim “wondered how long it would take to forget the names of all things, to look at a world unconstrained by the requirement of acting like he knew it.” The “names of all things” are essentially God’s names for all things, so this is Jim’s way of conceiving of a world without rules, a world that needs to be named for himself.

The Biblical definition of sin is that it’s a transgression or rebellion against God. I think this is a point where religion can fail us, by requiring a patriarchal obedience to an authority, yet there is something about sin that is about asserting yourself as above God and others—about claiming your freedom and right to self-determination against societal conventions. So I don’t view sinning as necessarily bad, especially when sinning is a matter of claiming yourself, such as when “sin” means forbidding the expression of your sexuality or prevents you from marrying the person of your choosing.

In each of the cases you mention in “The Names of All Things”—the teacher, Jim, who sleeps with Crystal, and the father, who is a negligent parent—they have treated her without care or love and rationalized their behavior. To not care for another is a good definition of sin for me. Sins can be large or small depending on the degree of lovelessness we show.

DS: Is language a form of sin?

GF: I love this question so much that I want to write a book about it.

To answer it, I’ll revisit the Christian meaning of sin again (although I claim no true theological knowledge) because I’ve always been interested in what it means to be created in God’s image. If so, then God is a rebel and a creator, which is why we’re rebels and creators. I like to think Adam and Eve ate from the tree of knowledge not in spite of God but because of their similarity to God.

To rebel is to create and determine yourself—to enter the realm of a new language and to search for new words (and new worlds). So, yes, I suppose language can be viewed as a sin because Adam and Eve gain the use of language by eating the apple—they gain an awareness of themselves and their nudity, they leave the Garden of Eden and go into the world, and they gain the need to explore and define the world.

Sin ultimately involves a confrontation between obedience and rebellion. Language guides Adam and Eve toward knowledge of themselves and the world, toward rebellion, so language is a sin, but a beautiful sin, a necessary one. Perhaps God even created the world out of rebellion, out of the need to assert and explore their own language.

This is the paradoxical place where many of my characters reside: trying to speak their own language.

DS: The shorter pieces leave the reader with a lot of questions, which I love. You get a kind of blurred image / snapshot of the character(s). These mini-stories often end with a provocation—something that makes you want to dive deeper (but, of course, you can’t). What is the relationship between these fragments that leave the reader wanting more and some of your more conventionally fleshed-out stories in this collection? How do you like to play with form within a collection these days? Do you aim for a balance between the more experimental pieces and the tightly structured ones?

GF: I’m moving more and more toward writing with an aesthetic of brevity, of telling a story through fragments. I like the “blurred image,” as you put it, because I think most of life is about blurred images, about what’s misunderstood or unsaid—or unsaid in the said itself. If the duty of an artist is to represent life accurately, that doesn’t mean we should necessarily represent life with a sharpness and precision, which tends not to exist, but to capture that blur—to live in that provocation you mention.

I wanted the shorter pieces to converse with the longer ones to offer a different texture to the reading experience. Although a book doesn’t offer the literal textures that a painting or sculpture does, I like to conceive of stories through the textures they create, which is why I like to mix the short and the long, the fragmentary and the full.

DS: Is there anything in this collection that you feel might have been directly or indirectly influenced by paintings and film? I was struck by “Mademoiselle in a Coffee Shop.” It felt like an Edward Hopper moment—that lingering, iconic loneliness.

GF: It’s funny you mention Edward Hopper because I use one of his paintings as a visual prompt in a course I teach on writing flash fiction. His paintings are like highly narrative snapshots. They’re very filmic. I don’t use visual prompts to spur my own writing, but I’m a dedicated photographer. I like to walk around strange places and look for strange things to photograph, and I essentially like to write in the same way—by meandering, putting myself in risky places, observing, and trying to discover something that might otherwise go unnoticed.

I like snapshots as a metaphor for storytelling. That’s what initially drew me to writing 100-word stories—how they resembled a snapshot, an epiphany torn from life. I like the idea of stories moving like an old Kodak carousel, a series of projected images. That’s essentially the form the first story, “Gerard and Celeste,” takes. It started as individual 100-word stories, which I later linked around a guiding narrative trajectory.

DS: Me too, that really resonates with me to describe the act of writing as equal parts discovery, calculated risk, and observation. Many of the characters observe themselves, are acutely self-aware—while also risking self-abandon. I enjoyed the story “I Just Want To Feel It” in part because of the main character’s hyper self-consciousness. Monique would notice the rotting apple in the still-life painting; her husband wouldn’t.

What is the relationship between rot and sin? For your characters, is sin a pathway towards feeling alive again and cheating the decay in our lives that comes from unquestioned convention? As a practicing Christian, it’s difficult for me to talk about sin in this way, but as a reader, I love to watch characters howl their way through the dark.

GF: I think my characters generally look to sin as a way to feel alive. They sin as a part of their seeking, and their sin can even be akin to reaching for something holy because they want to go beyond their lives, but they’re often seeking in misguided ways. As Jung said, inside of every alcoholic there’s a seeker who got on the wrong track.

I’ve been as influenced by Denis Johnson as any other author in my life, and his collection Jesus’ Son is full of sin and misbehavior, yet the stories hold prayers within them. I’ve always been obsessed with the way Johnson can write about the most sordid of situations but then manage to include a burst of poetry, a moment of numinous grace, which will lace its way into the story in the oddest way, as if to signal the presence of the divine.

Denis Johnson, who called himself a Christian (although one likely to go to hell, he joked), said that all novels spring from the same impulse as the Bible. I like that: if there is a God, and if they did create us in their image, then the power to create and seek and connect and wonder—and howl through the darkness—are at the heart of who we are. We contain multitudes, and those multitudes form a definition of the divine. 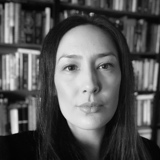 Darley Stewart is a Scottish-Korean fiction writer. Her work has appeared in Joyland, The Believer, The Brooklyn Rail, Tin House, Electric Literature, The Ocean State Review, and more. A recipient of an international fellowship from Seoul Art Space, she is at work on her first novel.