There’s this old trope, of which I’m sure you’re aware, about writers being ritualistic creatures.  Hemingway wrote every day at dawn, the sun thawing his hands, words trickling like ice melt.  Eileen Myles, co-opting an old photographers’ practice, would look out sometimes for hours from the same New York City stoop, making poems from what she saw and recorded of the busy street. There’s a faithfulness in these practices, something within the repetition of process, that speaks to a religious devotion to the craft. In CAConrad’s recent collection Amanda Paradise: Resurrect Extinct Vibration, rituals themselves, their rigor, often infuse the work with a prayer-like urgency—as one prays to live, to cope with the world in which we live, so too one writes:

But ritual, to CAConrad, extends beyond mere repetition of process or a rigid faithfulness to procedure—though these too seem a fundamental part of their practice. When CAConrad speaks of ritual, they refer to a spiritual and/or somatic experience they devise with specific intentions. In a 2016 reading at the Gloucester Writers Center, for example, describing a ritual they created and performed in the wake of losing their partner to a violent crime, CAConrad speaks of swallowing, every day, a crystal their partner had given them. Every day during a MacDowell residency, they would swallow the crystal and let it pass through them. They would then sterilize the crystal and swallow it the next day—a small, daily lifecycle. “I was convinced,” says CAConrad, “I could do rituals for making poetry that would alleviate the sadness.”

A (Soma)tic Poetry ritual, CAConrad called this practice, and though I won’t attempt to define the term they’ve coined, such rituals seem to me felt experiences whose procedures and meditations, mindfully devised, are meant to explore and resolve trauma and, eventually, lead to poems that then explore the ritual experience and its conjurings. The first 100 pages of Amanda Paradise are devoted to these poems, where the final 18 pages, written in nine sections of prose, walk the reader through the rituals and experiences that inspired the preceding poems. Of course, there is a poetry in CAConrad’s prose, which pushes the sections beyond mere explication, giving them the sense of being poems about the making of the poems that come before them.

Moving through the first 100 pages, we encounter poems that are often short but brimming with energy, with voice, and which are carved into fascinating shapes—the form of the poems, alone, is worthy of its own study, visually engaging as they are, and full of movement. Some of the poems reference their inciting ritual but are, for the most part, alive and vibrating within a lyric moment:

Many poems, like the one I’ve cited here, reference COVID-19 or the bubonic plague, others reflect on friends and loved ones lost during the AIDS epidemic

—less a comparison or conflation of the three viruses than, by positioning them next to each other in conversation, an insistence that the reader consider them all at the same time, holding at once all their similarities and differences, standing in the wake of their cumulative threat and destructiveness.

We move through the poems—the creative result of a ritual CAConrad performed in every state they visited over the past three years—and poem by poem we knit a sort of tapestry of revelations and associations, memories and laments, most of which seem linked by the overarching language of death and disease,

loss on both the personal and global scale:

my first meal after his death
a decision to persist without him.

It’s with this piecemeal understanding of the poems that we encounter, in the book’s final 18 pages of prose, clear descriptions of the foundational ritual from which the poems are derived.

The “Resurrect” ritual involved CAConrad lying on the earth—in whatever new state they found themselves—and “flooding (their) body with field recordings of recently extinct animals.” They began each time with audio speakers by their feet, gradually moving them up their body, their cells “incorporating the sound waves,” ending with the crown of their head.

We read the poems, then we read the account of their making, their inspiration. And it’s with this perspective that the book’s vital impetus, to this reader, becomes clear. The “Resurrect” ritual put CAConrad into contact with extinct animals. The poems put them into contact with those who died of COVID-19, of AIDS, those who died in the tangle of less clearly defined epidemics—the intolerance of and violence toward the LGBTQ community. Amanda Paradise is a book, a space, wherein the loss of loved ones and the destruction of entire ecosystems braid themselves into a single grief, a single historical moment CAConrad leads us through, helps us reckon with. “The most important lesson this book taught me,” says CAConrad, “is that survival depends on falling in love with the world as it is, not as it was.” And maybe that, ultimately, is what this book is: a proclamation of love for a world on which we wait, will go on waiting, to love us back. 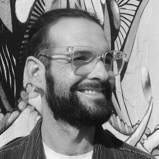