“I WANT A BETTER APOCALYPSE THIS ONE SUCKS” is a proclamation that lands in Andrea Abi-Karam’s second book Villainy, with the playful yet fatalistic petulance of a young and restless fugitive. Here is the collective invective of the dispossessed: it is not only a calculated brat attack, but also a thinly veiled promise of retaliation. A self-described “trans, arab-american punk poet-performer cyborg,” Abi-Karam prowls through a devastated necropolis of glitch poetics, somewhere over the digitally diffracted rainbow and wayyyyyyyy beyond the thunderdome. They scan the wasteland with leonine precision, both a renegade mercenary and a dystopian field medic, implanting repurposed microchips in the vertebrae of injured dyke vigilantes, or better yet, eradicating the concentrated scourge of hedge fund bros from the face of the planet. Their mechanized silhouette emerges from a plume of atavistic smoke, weaponizing the legacies of our queer ancestors (Ana Mendieta, David Wojnarowicz) in linguistic and erotic acts of retribution against the fascist state.

Continuing the work of their debut EXTRATRANSMISSION, Villainy is poetry as artillery barrage, a pyrokinetic collection that explores how the trans body is mediated by technology and surveillance, and ultimately liberated by the intersection of public sex and protest. By incorporating stark directives, inverted snippets of propaganda, and fractious manifestos that gleam with Ballardian menace, Abi-Karam roams through the cyber-wreckage of our collective consciousness to inject the beleaguered masses with revitalizing “transfusions of glam.” You’d be wise to batten down the hatches and gird your loins, as torrents of cum rain down over heaps of molten scrap metal, all of it suffused in a musky miasma of biodegradable glitter.

On the very first page, we are immediately galvanized by the following battlecry:

This rager-as-revolution ethos cuts through passages of intense mourning and subsequent reckoning to fully manifest as a searing condemnation of the myriad failures of the government and an explosive incantation against all limits, borders, boundaries, and thresholds imposed by heteropatriarchal imperialist hegemony. Abi-Karam hacks into the mainframe to catalyze a swift dissolution of binary code, and eviscerates the disingenuous lexicon of patriotism with a loaded arsenal of blunt instruments. The somatic form depicted within is capable of sublime innovation and rebellion: the anatomy destabilizes under the inexorable pressure of the war machine, under “EACH CELL OF SUPREMACY RISING UP TO BLAST OUR TEETH ALL OVER THE SIDEWALK,” (from the section entitled WHAT IS CLOSED/WHAT IS CONTAINED) only to reconstitute, however haphazardly, in an effort to “Imagine the possibility of unbecoming.” This unbecoming is a malleable resilience, a generative scar tissue, that speaks directly to Villainy’s inclusion of the following epigraph from Testo Junkie by Paul B. Preciado:

we need to open a revolutionary terrain for the invention of new organs
& desires, for which no pleasure has yet been defined.

Accordingly, the subversive and transformative properties of sex are integral to this ideology, and on prominent display in numerous configurations throughout these pages. “You fuck me with your entire hand in a room full of the dead” is the beginning of a passage that casts fisting as an act of necromancy. The fist as signifier openly contradicts itself; it contains multitudes. The lubricated, penetrative fist is an avenging angel that creates autonomous space for the dearly departed. The radical practice of fucking beyond the bedroom works as a means of psychospatial vandalism, a way to further dismantle the eroded facade of respectability politics, and to challenge the forces that perpetually stigmatize the expression and visibility of the queer body.

The enemy has long been coded as ‘other’ in the annals of American history. With Villainy, Abi-Karam gamely embraces the aesthetic lineage of the nemesis, the bad seed. While many aspire towards a “toothless” antiseptic poetry, Abi-Karam proudly displays their titanium fangs, delighted to bear the smoldering crown of the insurrectionist. They loom leather-clad at the edge of a churning vat of nuclear waste, detonation device firmly in hand. “I am the villain,” they declare with a radioactive glint in their eye, before plunging headfirst into the abyss. It might behoove you to join them. 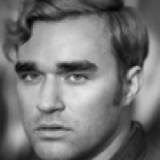