“Sakhiya, if we forget our songs and stories / who will we become?” Poet, translator, and memoirist Rajiv Mohabir reminds us in Cutlish. The symbol of the cutlish/cutlass/machete scattered throughout these poems attaches itself to the violent history of indentured slavery in Guyana, discrimination against the Indo-Caribbean community due to hegemonic beliefs, and the removal of culture and language for a sanitized assimilation. Yet Mohabir’s same cutlish slices open the space for a blend of languages, Chutney songs, and stories; its revival brings forth the will of self-acceptance, the memory of Indo-Caribbean traditions, and the roots for its survival.

The history of the Indo-Caribbean community carries itself across the sections of this collection as the speaker tries to figure out the answer to the question: Where do I come from? In this exploration of the past, Aji, the speaker’s paternal grandmother and oral historian of the land, is the voice that cuts through the disregarded space of Guyanese diaspora with its lyrical Creole: “An’ when dem bring ’am dem na get house, dem na get nutin’, dem a-cut cane. Dem a-punish bad.” These memories of hardship are further incited by the colonizer’s authority, where ancestral names are forgotten, English is “an invasive species choking out the / native plants and birds,” and queer identities succumb to the damage of homophobic idealism, leading them “to Christian- identitize / anti/rass/batty//bwoy/man.”

It’s the silencing nature of English that strains the identity of the Indo-Caribbean community in Mohabir’s poetry as language crosses seas and time. Language becomes the abuser, something hard to escape even as poems settle in Florida, Queens, and anywhere that resembles a home rebuilt. In a society where it is better to be complicit than divergent to the dominant heteronormative perspective, acceptance and abandonment weighs heavily on the speaker and other members of the Guyanese community; the result is dissociation, as we see in “Massacre Ballad”:

My father was growing
linen and cotton fibers to weave a spangled
banner as his shroud. My mother clove her tongue,
misspoke her name and shut her guru’s door tight
against her own child.

As the languages Mohabir uses are characterized as “inadequate,” this stereotype causes post-colonial voices to racialize the speaker. “Americans erase my serf story; / call me Indian” thus causing the tone to turn towards one of loss and grief: “Now the land is erased / under my feet. I am told / I am nameless.” The rockiness of being labeled or unrecognized steers this journey of finding oneself into territory as opaque as the kalapani. Memories are muddied and culture becomes appropriated while owners of the Indo-Caribbean community are castigated: “Rita-Christina is allowed to vacation in your skin. / When Aji sang Hindustani songs, missionaries filled her mouth / with coals.”

It is sometimes hard to digest these words, as Mohabir makes sure to show the ugliness of assimilation and the complicated relationship to brownness in the Indo-Caribbean community, as there are those who internalize the violence and trauma to also become the abusers of the community. We see family members who uphold Islamophobic ideology after 9/11. We grieve for women murdered by disgruntled men who believe domestic violence is not a crime. We walk the streets of Queens, feeling a sense of “brokenness” to an identity that has been overtaken by biases. It’s in this discomfort of full candor that one can wonder what’s left to salvage.

However, nostalgia of the speaker’s upbringing and the pockets of beauty layered in between lines show the reasons to fight for one’s connection to the self and community. At moments, these poems transported me into childhood with the remembrance of “ground garam masala,” the stories of strong mothers who finally learn to live without a man’s dominance, and the mashup of Sundar Popo songs. Although, these songs take on incredibly new meanings, as “Falling from a Plane” is a poem that explores the effects of immigration as well as the speaker’s growing confidence in his queerness.

This makes the use of Bhojpuri, Creole, and Hindustani even more important to this collection as the Devanagari script that sections Cutlish becomes erased and anglicized, and as individuals in this collection start to accept the “superiority” of English. These languages become a tether that Mohabir holds onto as Aji dies, and with her, the last ties to a culture becoming increasingly forgotten. As a translator, Mohabir introduces a structure of couplets in Hindustani and Bhojpuri in the beginning of a poem, to give their translations at the end, showing the hurt, anger, and hope in a series of poems.

If this is a world of illusion then
whose light shines from within you?

In other playful ways, Mohabir chooses radical translations, showing his right to tell the story of his community. The translation of “ruko ruko sriji / sankar ke pyari mohini” reminds us of the queer history from our passed down stories. The lack of translation for the line “okar raaj khatam hoijai, me sarape you skunt” plants a smile on my face, showing the strength of Mohabir’s home and culture against the pressure of English’s silence.

It’s this will to no longer live in silence that pushes the speaker to be unruly—to accept his Caribbean experiences as wholesome, beautiful, and uncontrolled by ignorance even if given in fragments. Through a more self-accepting and self-righteous voice, queerness is seen as conventional, as a part of Guyanese culture, without shame. The language allows Caribbean identity to extract itself from the labels previously forced upon it. To fill what silence once shackled into emptiness. To celebrate everything that has not and will not die, a sentiment we see in the repetition of poems titled “Indo-Queer”:

can’t tread the Caribbean brine, wild and wide,
in your tongue, can’t mend the cutlass gash of your eyes.

Rajiv Mohabir beautifully shows us in the collision of languages that all these remnants of tradition, lyricism, and dredged-up stories create the Indo-Caribbean community. One that cannot and should not be forgotten. Our ancestors did not cross the kalapani for us to be cut down like cane in the fields they were forced to tend. Mohabir shows from his upbringing what blossoms from the harsh violence of patriarchy and colonization. And with the need to hold on to what is dear to us, Mohabir gives us the reason to reclaim our culture. He creates a space for us to gather, dispel the prejudices that have hurt us, and continue our inheritance with more acceptance. With this wholesome retelling of our past and present, Mohabir even asks those who have previously misunderstood everything that has created the Caribbean to contemplate: “Do you still see anything that’s broken?” 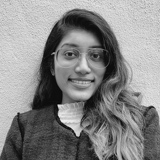 Ashley Somwaru is an Indo-Caribbean woman from Queens, New York. She received an MFA in poetry from CUNY Queens College. Somwaru published a chapbook in 2021 titled, “Urgent \\ Where the Mind Goes \\ Scattered.” Previous work has been published in Lammergeier, Solstice Magazine, VIDA Review, and elsewhere.