Kyle Lucia Wu’s debut book, Win Me Something, follows Willa Chen, a biracial Chinese American woman in her 20s, and her experience as a live-in nanny for a rich family, the Adriens. During her time as a babysitter, Chen reflects on her childhood and searches for belonging.

Wu is both the Managing Director at Kundiman and a senior editor at Joyland. She also teaches writing at Fordham University, The New School, and Catapult.

Audrey Fong: What was the inspiration or impetus for Win Me Something? Was it an idea you had for a long time, or did it come to you when you put your pen to the page?

Kyle Lucia Wu: It came from my intrinsic interest in different types of families. I grew up in a blended family and didn’t really see other families that were of the same structure as mine. When I began working as a nanny in New York, I was already writing stories, just teasing out ideas of families, and being inside the homes of all these different families fascinated me. Though Willa’s story is fictional, she shares some circumstances of my life, and I was interested in recreating them on the page because I had always felt like those parts of my life were misunderstood.

AF: That’s really cool. I like that it’s partly based on your experience, but not necessarily exactly like your experience, so you can take those feelings and create something that resonates with a lot of people.

KLW: Taking the circumstances but fictionalizing everything else allowed me to give it an emotional truth, rather than the actual truth of my life.

AF: I totally get that. What does the title, Win Me Something, mean to you and how did you decide on it?

KLW: When I wrote those words in scene, I wanted them to be the title from the beginning. The title never changed. What I liked about it was that I thought there were many different interpretations of it, and I didn’t think any of them were incorrect. I felt like it was a title that could have many different truths.

It sounded like an active phrase, but it was actually a passive phrase, and it brings in this idea of a game. Who gets to play the game? What does it mean if you’re not able to play the game, or if you’re observing someone else do so? I thought it brought up implications  of who has access and who gets rewards and who’s even allowed a spot.

When I wrote those words I wanted it to ask the question of, what does it mean when you shrink yourself, or when you give parts of yourself away for someone else’s well being? Learning not to shrink herself is a big part of Willa’s quest.

AF: The title really does work on many different levels, which I’m sure many people will notice when they pick up the book and read it.

You open the book with a Yanyi quote: “It seems so selfish, to want to be known!” Throughout the book, Willa struggles with belonging and wanting to be known because of her biracial identity, being the child of divorced parents, and being from a lower socioeconomic status than her employers. What led you to focusing on belonging as the central theme of the book?

KLW: I love that Yanyi quote. It was hard for me to write anything that wasn’t intrinsically tied to the struggle of belonging in this first book, because that just felt so present to me that it bled into everything I wrote. I couldn’t write about a family structure without having it connected to the question of, how do you belong in a family? It came out naturally. I could’ve written a book about anything and it would’ve ended up circling around ideas of belonging.

AF: That’s interesting. So it’s kind of like a central theme in your writing and something you enjoy working with and expanding on?

KLW: Perhaps it’ll always be a central theme, but it was definitely something I was circling around at that specific time.

AF: This was one theme that I was especially interested in. Several white characters have fascinations with Asian culture, from Nathalie’s interest in Korean skincare to Ray’s love for Jack’s Asian Delicacies, a nondescript Asian restaurant that serves a variety of foods from across Asian cultures. Why was it important to include these notes of Orientalism and pan-ethnic erasure?

KLW: For me, I felt like growing up Asian American always felt like this experience that was sticky with ostracization and then appropriation, and the contrast between the two. It’s disorienting to feel like society wants to pick and choose the parts of you that are palatable or appealing or that they can be envious of. When I was younger, I would get made fun of for the shape of my eyes, but complimented on my tan skin–– there’s such fragmentation in feeling like there are only certain things about yourself that are seen as appealing, while others are seen as wrong.

Sometimes comments like that have ill intent and sometimes they’re more borne from ignorance, but they both leave a mark when you’ve accumulated enough of them. We spend a lot of time dissecting the intent of things sometimes, but it’s also important to think of the impact they have, and I wanted to explore that impact on one’s identity.

AF: In many ways, this novel is more than just a nanny novel. It’s also a story of divorce and trying to find your place in your parents’ new families. How did you decide on divorce and the effects it has on a child?

KLW: Out in the world, I had come across other people from blended families and it was always so exciting to find someone who understood the different dynamics of growing up that way, but I didn’t feel like I had read enough about it. If I did read something, it often centered on a nuclear family’s experience of divorce, not the contemporary idea of a blended family.

Family is where we first form our ideas of identity, our foundation of who we are. And what is it like when your foundation feels fragmented, when it feels broken up? I was interested in exploring what kind of effect that could have on someone in the present day.

AF: You’re right. I feel like you don’t read about divorce or even families that have experienced divorce that often in literature. And yet, it seems like a common experience, and you’d think there would be more literature out there that could maybe help people process their own divorces or their parents’ divorces. So it’s cool of you to include that.

Reading your book, I identified with Willa often, such as when she shares that her dad immigrated to the U.S. six or seven years after the repeal of the Chinese Exclusion Act. My maternal family immigrated a bit later, but still close to the repeal of the act. I liked how subtly you worked this into the book. What do you hope readers will learn about Asian American, or more specifically Chinese American, history?

KLW: That’s such a big question. I hope that a lot of readers will learn a lot more about Asian American history than they know because most people know so little about Asian American history; it’s barely taught in our schools, it’s not that accessible unless it’s being sought out. There was a balancing act between the things that I know about history that Willa doesn’t know in the book. I had to be true to Willa’s experience because I think a big part of why Willa feels so isolated is because she’s isolated from this history. Maybe if she did have access to Asian American history, she wouldn’t feel so alone. Cutting us off from our history in that way, by not providing us access to information about it, feels pointed. It’s a way to make us feel like we’re not connected to those lineages, but at the same time, we’re also told that we’re not connected to being American.

AF: Throughout the book, Willa reflects on how she isn’t a great nanny and how she isn’t trying that hard. She seems to stay with the Adriens more so out of a desire to experience their luxurious lifestyle from testing Nathalie’s beauty products to trying on her clothes and charging a meal here and there on her card. How did you choose this almost borrowing of another’s life as a subplot of the book?

KLW: I like that wording of “almost borrowing of another’s life.” Through a refracted lens, I wanted to discuss the myth of assimilation. If you just have the right things, if you look the right way, if you earn the right money or get the right job, that you’ll be accepted, that you will reach the level of the dominant culture, as if we’re in a meritocracy.

For Willa, it’s appealing for her to be around these amounts of wealth, these really luxurious belongings, and the shiny apartment. It’s easy for her to feel like, “I’m so close to power. I’m so close to wealth. It’s almost like I have it.” It feels within her grasp. It’s seductive to feel so proximal to these things. I wanted to show how Willa can try on these products, Willa can take Nathalie’s name for a night, Willa can get certain things from here, but she’s never actually going to be one of them–– and maybe she shouldn’t want to be.

AF: That’s a great answer and that definitely adds so many layers to your story now that I know where it’s coming from. The last question I had was, what do you hope readers will take away from your book?

KLW: I was trying to explore moments in the book that were, for Willa, formative or important, but might have seemed really small or gone unnoticed by others. But those moments can accumulate and still have an impact. I don’t have something prescriptive I want people to take away, but I like the idea of a refreshed perspective on what moments are worth paying attention to both in your life and in others’. We’re trained to believe that certain types of experiences are important or meaningful, and that those are the moments that are most important in our lives, but sometimes there’s more to see in the margins of these events. 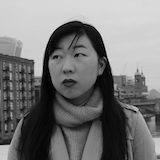 Audrey Fong is a Southern California-based writer, interested in Asian American and coming of age narratives. She earned her B.A. in English from UC Irvine and is currently pursuing an M.F.A. in creative writing at Chapman University. Her writing has appeared in The Infatuation LA, Irvine Weekly, New Forum, Same Faces Collective, Unfiltered Zine, and Yuzu Press. In her free time, she enjoys reviewing boba stores and playing with her dog, Charlotte.