Andrea Cohen is the author of seven poetry collections, including, most recently, Everything. Her poems and stories have appeared in The New Yorker, Poetry, The Threepenny Review, The Atlantic Monthly and elsewhere. She directs the Blacksmith House Poetry Series in Cambridge, MA, and is a recent Guggenheim Fellow.

This interview was conducted over email in the summer of 2021.

Daniya Baiguzhayeva: Hi Andrea! Your most recent collection, Everything, was published earlier this year by Four Way Books. Do you remember how the book began, or the moment you realized this was going to be a new collection?

Andrea Cohen: Well, I don’t really write books. I write poems. When I have enough poems, I sit down with them and try to see which ones ought to go out into the world and how they might proceed together.

DB: How did you decide on the title? In what ways were you thinking about the concept of “everything”?

AC: I wanted a title that reflected the feeling/sense of the poems in the book. Everything seemed right because of that sense of encompassing, and embrace. And of course there’s irony in there, because nothing can be everything—and everything would certainly never be contained in a slender book of poems.

DB: The epigraph to this collection—“Every toy has the right to break.”—is from a book of aphorisms, Voce (“Voices”), by the Argentinian poet Antonio Porchia. Is Porchia one of your influences?

AC: I would say that Porchia is a poet my own poems salute. His poems are these brilliant gems––complex, glimmering, wise. On a good day, I’d dream that we are kindred spirits.

DB: I’m struck by how much of the book is about loss. I suppose one offshoot of the notion of “everything” is the idea of collection, of gathering up disparate elements into one place. It makes me think of the poems “Right as Rain,” “Ring,” and “How Everything,” all of which reference the Noah’s Ark story in some way. Could you speak a little about the resonance of that story for the themes you were exploring in Everything? Is there a sense for you that poetry can similarly function as an “ark” for salvaging and preserving memory, the things that the flood of time or circumstance threatens to ravage?

AC: I seem to circle back to those Bible stories. They’re really good stories, and I was raised on them. And yes, I would agree with what you suggest re: poetry and preservation. In poems, memory and imagining can get braided together. The flesh of us may not last, what we love may not last, but the stories we tell, how we make sense of it all––those get passed on.

DB: I’m quite interested in the later poems’ preoccupation with aftermath. “After the End”, for example, ends with the plea “Hear me out — / if someone / above the rubble can.” What, if anything, do you think poetry can offer in times of uncertainty and crisis? Do you write with a sense of futurity or future readership in mind?

AC: I think that in times of uncertainty and crisis poetry can offer what it always offers––a sense that we are not alone, that what we feel and think others have felt and thought. Poetry can offer connection and understanding, gravity, humor, surprise, and the sense that we may, by reinvention, survive. I am thinking here of a poem by Tadeusz Różewicz, “In the Middle of Life.” That poem begins: “After the end of the world . . .” and continues with the speaker relearning what it is to be alive.

I don’t write with a sense of a reader really. But I do send my poems off first thing in the morning to a few dear friends/readers. And their feedback is invaluable. As far as the future goes, mostly I hope there is a future, one in which people will still be reading poems. And if a couple of mine are in the mix, well, that would be nice.

DB: There’s a great line in the poem “Dust”: “What stones become is what / holds them together.” What holds the poems in Everything together?

AC: Love and loss would be key, I suppose. And time and wonder. And finding one’s way as one goes along. I think of Roethke’s chestnut: “I learn by going where I have to go.”

DB: Your poems are often very brief—sometimes as short as a handful of words. Do they tend to come to you in that very taut form, perhaps as a by-product of the way you naturally think and conceptualize things, or is it more a process of whittling away at a piece until it becomes that succinct?

AC: Those very short poems tend to present themselves in that fashion. I might think of a word or phrase and roll it around in my head the way one would a small stone in the hand, to see what it is, to feel the weight and shape of it. There certainly can be some editing, but the final drafts of those poems are often similar to the first draft, which often will come when I’m out running or swimming or walking my dog. And it’s always the sound that drives them along and allows them to find their final shape, in which the few words need to fit together as the blocks in a Rubik’s cube would.

DB: What about the longer poems in the collection?

AC: Those work by association. Just sort of letting the mind go where it will, and trusting that the mind (the poem) makes connections. They meander and digress and often circle back. Those longer poems usually have many drafts until they finally feel right. The very short poems are far less unbridled, less messy.

DB: In some of the poems, like “Craft Talk” or “Self Portrait with Eraser,” the lyric speaker talks about creating visual art. Do you draw or paint yourself, or engage in other kinds of “craft” besides writing?

AC: I’m a great admirer of visual art, and inspired by it in writing. But I’m not a maker of it.

DB: How did you first come to poetry? What kinds of things (people, texts, experiences) would you say have been especially formative to your writing?

AC: I have been writing poems since I was six or seven. There have been so many poets and writers and artists whose work has been important to me.

What speaks to me changes. And as far as experience, it’s just living in the world, really, that finds its way into poems. And of course, imagining another world.

DB: Since you finished writing this book, we’ve had our lives overturned by the COVID crisis. What has brought you solace during this time?

AC: Nick Martin reading P.G. Wodehouse. Zadie Smith reading Zadie Smith. My sweetheart reading poetry. Anyone reading Chekhov. What has brought me solace during this time are voices. Sometimes in the same room, sometimes from six feet away, in my neighbor’s yard, sometimes across an ocean. It’s those voices (and people and literature) that have buoyed me. And my dog. And swimming. And walking by the sea. And the hope that our species and planet are not beyond repair.

DB: What’s some writing advice that you wish you’d heard when you were younger?

AC: I can tell you some advice I did get, and for which I’m grateful. Phil Levine basically said to not get too precious with what you write. All my teachers shared the poets they loved, which is the best thing they could have done, and the most important thing I’ve been able to do as a teacher. Gail Mazur told me that once you realized that you’re doing the same thing in a poem, you can’t help but change that. And I think of what Wisława Szymborska answered when asked why she had only published 400 poems: “There is a trash bin in my room.”

We should all have a trash bin far bigger than hers. And not be afraid of writing bad poems. Because it’s how we find our way to the better ones.

The advice I would give young writers is not to worry too much about publishing, or about what seems fashionable. Write your own poems because you have to, because you want to. Take your time in finding your voice. Try not to take rejection to heart. Keep a place for solitude and silence in your life; guard it. Be open to criticism. Try to master a balance between humility and hubris.

DB: What have you recently read that you’ve enjoyed? What poetry collections do you always recommend to people?

AC: Some of the books on my kitchen table right now are: The Solace Is Not the Lullaby, Jill Osier; Synthesizing Gravity, Kay Ryan; Stolen Air, Osip Mandelstam (translated by Christian Wiman); Henry N. Cobb: Words & Works 1948-2018: Scenes from a Life in Architecture, Henry Cobb; The Essential Muriel Rukeyser, edited by Natasha Tretheway; Funny Weather: Art in an Emergency, Olivia Laing; Priest Turned Therapist Treats Fear of God, Tony Hoagland; To look at the sea is to become what one is, Etel Adnan; Allegria, Guiseppe Ungaretti (translated by Geoffrey Brock); Intimations, Zadie Smith. There are always lots of piles of poets/others I love or am just beginning to love, and especially poems and passages that I can’t but read aloud to others. Or myself.

DB: Are you working on anything at the moment?

AC: I’ve just put together a new manuscript and I’m writing new poems, as well as a little drama and very short fiction. I never know what might happen when I sit down in the morning. Which makes me really happy. 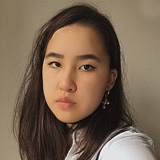 Daniya Baiguzhayeva is studying for an MPhil in Modern and Contemporary Literature at the University of Cambridge. Her interviews have featured in SPAM zine and Red Queen Literary Magazine, her writing in Literary Review and Menacing Hedge, among others. Her work was commended in the 2021 Adroit Prize for Poetry.

0
Daniya Baiguzhayeva November 9, 2021
No Comments Yet