To be Asian in America is to live with one’s foreignness. We wear the mark of immigration on our faces, whether we are born here or not. We learn the habit of assimilation early, along with the tools that allow for it—silence and observation. In the process, a bifurcation takes place: out in the world, we talk and gesture like our mostly white peers; inside our homes, with our families, we preserve the culture and language of our ancestors.

Questions around identity, connection, and language can be even more complicated for multiracial Asian Americans—questions Anne Liu Kellor contemplates in her sensitive, soulful memoir, Heart Radical: A Search for Language, Love, and Belonging. Born to a Chinese mother and American father, Kellor grew up in Seattle, raised in part by her maternal grandmother. Thus, she considered Chinese her first language. But as an adolescent, she minimized the Chinese part of her identity: “Whiteness, assimilation, and the model minority myth had taught me to distance myself from my Chinese roots, well before I even knew any of those terms.”

The word “root” relates to the book’s title, which Kellor bridges to letters, or characters, in the Chinese alphabet: “Four strokes of a brush form the shape of a heart. In Chinese, heart is a word that can join with other words to make new words, but sometimes the heart is hidden deeper. Sometimes the heart is a ‘radical’—the part of a character that hints at its root meaning.”

Kellor finds herself yearning to reconnect with her Chinese roots when she goes away to a mostly white, liberal arts college in Minnesota. In 1996, she took a year off to backpack through China and Tibet, staying for six months: “To see where the part of me who once lived in this language has gone.” Upon arrival, her half-Western features tag her as a foreigner there too. But it was an intoxicating, challenging trip, one that made her want to return. In 1999, she did, this time finding work in Chengdu, in central Sichuan, where she would live on and off for three years. The memoir focuses mostly on this seminal period of her life, which, looking back twenty years later, she views as a touchstone, marking the woman and artist she would become.

Heart Radical is in part a travel memoir, and to that end, her descriptions of her surroundings and the unfamiliar customs she witnesses are rich and vivid. I was riveted by the chapter “Sky Burial,” which depicts a Tibetan burial ceremony, where corpses are taken to a valley filled with vultures, a pragmatic solution to “high death rates, little firewood for cremation, and scarce land suitable for burial in the ground.” And in this snapshot of a typical provincial city in China, she deftly conveys the cacophony and post-Mao materialism of its residents: “Pop music blares from CD shops or karaoke bars; young women in tight shirts sporting fake designer logos or random misspelled English words make their way along uneven muddy pathways in platform heels; young men swagger in cheap oversized suits with the brand name tag often left on the sleeves.”

Most resonant for me throughout her memoir is her interrogation of both the usefulness and harm of silence; how honing her instincts as an independent person allowed her to find and use her voice. It is a stereotype, and yet it’s not untrue that for Asian Americans, this can be difficult—because silence is not only a reflex of observation, it’s a form of acquiescence; the way we as children are taught to be good. Kellor came from “a family of planners…Following one’s gut without a plan was not to be trusted.” But soon after settling in Chengdu, she does just that. After a night of drinking, she abruptly quits the soul-sucking teaching job she hates, packing up and leaving a note for her boss to find the next morning. It is during this period of being driftless, jobless, and newly liberated that she meets Yizhong (a pseudonym), a young painter.

The intervals between silence and speech permeate their relationship, neither being fluent in the other’s native language. Through his guidance, and two dictionaries, her Chinese improves: “In this space, we can take our time in communicating one word, one thought, one emotion—like the first time he whispered to me, baobei…a word reserved for children, or for lovers, or for some soft space in between.” One expects the usual trajectory of a young woman’s romance in a foreign country to end in wisdom gained through heartbreak. But Yizhong is adoring and supportive, and his parents embrace her, hoping for marriage. It is Kellor who feels unable to fully commit, partially due to youth and the desire to be free from restrictions; also, her growing homesickness and disenchantment with the constant noise and crowds. Mostly, it’s her realization that, despite his unwavering love, something is missing in their connection—something she has no words for in English, much less in Chinese, but feels deeply in her body. In the end, she breaks again from what is expected of her, breaking his heart too.

Thwarted communication is pervasive in her family dynamic as well. When her grandfather died, she remembers: “…this was the first time I witnessed the sudden eruption of my family’s grief and emotion, what was usually stuffed inside.” Traveling through Tianjin, she contacts an estranged uncle she hasn’t seen since childhood. To her surprise, he and her aunt are welcoming and generous, extending warmth to her he denies to the rest of the family. The reason for this fracture, she learns, stems from her grandmother, loving to her but psychologically abusive to her mother, aunts, and uncles, having suffered the same from her husband. When Kellor attempts to broker reconciliation, she only agitates her uncle, disrupting his hard-earned peace. She retreats, respecting his silence—and through his, her mother’s—recognizing when words are necessary, and when they are inadequate, even unwelcome.

Finally, this memoir is Kellor’s victory in overcoming her own silence. To offer and witness herself on the page. The memoir ends with her wistful musing that those she could not always reach through verbal communication—her mother and Yizhong, especially—might connect with her words there. Whether they do, and what their reactions might be, are beyond her control. What she can control is the voice she has found by trusting her instincts, as she declares toward the book’s conclusion: “…through silence I’ve learned how to listen. Through silence I can gauge when to speak…Yet the more I’ve learned to reveal, the less I can bear to hide…Slowly, steadily, a line has been drawn—a desire stretched taut across my throat, an old and tired seam splitting open.” 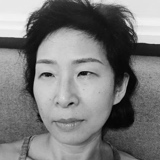 Chin-Sun Lee’s work has appeared in The Rumpus, Joyland, Your Impossible Voice, The Doctor T.J. Eckleburg Review, The Believer Logger, and Slice Magazine, among other publications. She is a contributor to The New York Times bestselling anthology Women in Clothes (Blue Rider Press/Penguin 2014). More at www.chinsunlee.com. Twitter: @leechinsun Instagram: @scribblepost