Both of these poems are from a new manuscript, titled Reader, I, which draws its title and animating framework from the famous-to-the-point-of-cliché phrase in Charlotte Brontë’s Jane Eyre: “Reader, I married him.” Organized around the first years of a new marriage, Reader, I blurs Brontë’s protagonist with a transgressive, contemporary speaker who both courts and eschews nuptial myths. While these poems grapple with a world of husbands and fathers, patriarchal nations and structures, they also address and invite in a reader who is, as in Jane Eyre, a confidant. The poems in Reader, I traverse a wide array of landscapes (literal and metaphorical): baseball parks and marriage; a Civil War battlefield and the “tightening of the budget”; public swimming pools— ultimately envisioning domestic life as a metaphor for civic life, and vice versa.

And part of that landscape is tonal—tracking a marriage means having to track a wide, complex field of my speaker’s attitudes toward marriage, toward the concept of being a wife, toward a life that is no longer solitary. Sometimes the speaker is joyful, sometimes skeptical, sometimes ambivalent, sometimes full of ire. Throughout writing these poems, my husband and I would turn the generating phrase into a kind of private joke, narrating our days. “Reader, I stole the sheets.” “Reader, I ate the last popsicle.” The twisting of married him to buried him came out of these mundane jokes, and I couldn’t resist it, however glib.

The burial in this poem is imagined—dreamed—as a propulsive action out of a claustrophobic domestic sphere. That’s part of my reasoning behind these justified prose boxes—the discomfort of enclosure, the stifling proximity of text. But I also think of the boxes as little stages upon which the characters act out their small dramas.

That interest in the stage, in dramatic utterance, of course extends to “Juliet, From the Balcony.” I can’t remember for the life of me where I heard it, but once it was pointed out that what so many think of as the “balcony scene” in Romeo and Juliet doesn’t, in fact, feature a balcony—that the word hadn’t yet appeared in the English language—I saw the balcony everywhere, from movies depictions to paintings to everyday conversation. I was interested in the kind of double-remove of this mythic figuration—what does it mean when our formative, romantic myths are remembered incorrectly? Why did so many want to pull Juliet outside the window frame? The poem alludes to Julius Kronberg’s 1886 painting that envisions Romeo having traversed the balcony. He balances on the edge of the balustrade, bending Juliet back in a seemingly passionate—if not particularly graceful—kiss. In a way, I was trying to think of Juliet as a kind of catalytic force, as inciting the desire for the balcony, avant la letter, to draw her closer—to Romeo, to the audience, to the present. 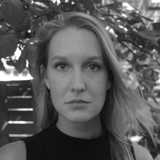 Corey Van Landingham is the author of Antidote (The Ohio State University Press, 2013) and Love Letter to Who Owns the Heavens (Tupelo Press, 2022). She is a recipient of a National Endowment for the Arts Fellowship and a Wallace Stegner Fellowship from Stanford University, and her poems have appeared in American Poetry Review, Best American Poetry 2014 and 2020, Boston Review, The New Yorker, and Virginia Quarterly Review. She teaches in the MFA program at the University of Illinois.