The Whispering House, Brooks’s second novel, had my attention from the title alone. It appears to be a modern take on the traditional Gothic haunted house, and I anticipated both a thrilling story and an exploration of the concept at the root of the genre. What fuels the horror of a haunted house is the presence of the Other: like the boundaries of the body, the walls of a house delineate the internal Self from the external Other, and a haunting fundamentally violates that boundary, threatening to usurp our authority as independent beings. Of course, while bodily autonomy is a given, ownership of a home or the land it sits on can be ambiguous, and haunted house stories force us to confront our assumptions about what actually belongs to us. The Whispering House engages these themes fully, but its Gothic tradition hides a different story.

Published by Tin House in March, The Whispering House tells the story of would-be writer Freya, whose older sister died mysteriously near Byrne Hall. Five years later, Freya returns to Byrne Hall for answers, where she meets Cory, son of the home’s late owner. Cory, an aspiring artist himself, invites Freya to move in, and she becomes his girlfriend and muse. The premise is pure Gothic fiction: an elegant manor, a mysterious death, a passionate relationship, a niggling fear that things are not what they seem. Brooks’s real interest, however, lies in exploring Freya and Cory’s relationship, as Cory becomes increasingly abusive.

Before and beyond anything else, Freya is Cory’s muse, and Cory’s work concretizes his possessive behavior, reducing Freya symbolically to an object over which he has total control. Freya knows his paintings are inaccurate, describing one as “an unimaginative man’s idea of [a pretty woman]: no greater than the sum of her parts, and perhaps a little less.”

As the paintings proliferate, however, Freya is diminished both physically and mentally, and, like many abuse victims, she struggles to protect her self-image from Cory’s influence. Brooks’s descriptions of portrait-covered walls literalize this smothering effect.

Brooks roots the mediocrity of Cory’s work specifically in his consistent reduction of his models to mere bodies. According to Freya, he’s “a pretty good observer of superficial detail … it was [the] self he failed to touch on.” His work reveals his fundamental inability—or unwillingness—to recognize Freya as a human being. Her painted counterparts have “too much flesh” and “not enough soul”; they’re carcasses, “[pieces] of animate meat.”

Describing the paintings in terms of flesh and meat effects a queasy erosion of the boundaries between symbolic and literal bodies, and other passages expand on the theme, framing art and art-making as legitimate substitutions for the organic. At one point, Freya recounts an attempt to build on a line of poetry that she’s written in her head, finally realizing that “The phrase no longer breathed. All I’d done was to lay it out, neat as a corpse, on the faint blue line at the top of page one.”

The killing imagery is essential—establishing the artistic as proxy for the biological allows Brooks to create a sense of physical violence with a minimum of actual bodily harm. The characters remain mostly intact, while portraits are dismembered and paint splatters are mistaken for blood. Cory’s work, in particular, verges on the cannibalistic: Freya calls his artistic attention “raw appetite,” and says of a different portrait subject that, “she seemed strangely denuded, as if he had stripped her of her personality layer by layer.” Brooks’s employment of explicitly violent metaphorical language highlights the subtlety of the actual harm Cory inflicts on Freya. His behavior, despite its manifest negative effect, defies easy condemnation because it provides no physical wounds. Bruises and cuts are tangible, while feelings belong to the subjectivity of experience. In drawing attention to this distinction, Brooks emphasizes the paralyzing uncertainty victims of abuse can experience.

This discomfort will be familiar to fans of ghost stories. Like a non-believer confronted with increasingly undeniable supernatural phenomena, Freya can neither trust her experience nor dismiss it. I was particularly struck by her confession, late in the novel, that “I’d wanted [red, indented fingerprints and deep bruises], as evidence against my own self-doubt.” Her imagined humiliation is that of the victim of a haunting who, lifting their shirt to reveal the scratch marks of a supernatural attack, finds their skin unmarred—who trusts to express their pain to others and is not believed.

By the last act, however, Freya can no longer deny who Cory is. Her increasing clear-eyedness is paralleled by her and Cory’s preparation for the book’s climactic event: a gallery opening at the house, where Cory will display his Freya portraits to a discerning and artistic audience. He’s certain that this exhibition will be a triumphant jump-starting of his career. Freya, her body, her image, is not a person, but a symbol of Cory, a representation of his talent and the object by which he’ll secure his own success. He goes so far as to choose her outfit for the opening, a display of domination so absolute that even her actual, living body belongs to him.

This possessive behavior is discomfiting enough, but Brooks includes two details that elevate the opening to the grotesque. In preparation, Cory paints the gallery walls blood red. There is something of the game hunter’s glassy-eyed trophies in Cory’s display of Freyas; mounted on red walls, they call to mind the skull-adorned room where Leatherface first appears in The Texas Chainsaw Massacre. Of course, Cory isn’t a serial killer—though he does, according to one character, “‘[go] on about capturing my soul like he’s some kind of satanic priest’”—but there’s a mask-like quality to his portraits. He prompts the audience to ignore Freya as an autonomous person in favor of identifying her as the representation of the painting’s invisible subject: him. Freya, in her ubiquity, disappears.

The directness and sheer amount of symbolism in this sequence risks rendering itself similarly meaningless. To my delight, however, Brooks adds a last detail that pushes it from the repetitive to the absurd: a name. The collection needs a title, and Cory, edging ever closer to outright identity theft, makes the obvious choice, a final exercise in domination. He names the show Freya. It’s completely expected, and it seems like nothing in comparison to the obsessive voyeurism of his paintings, but it’s also crueler. For all that a portrait can represent its subject negatively, or imbue them with new symbolic meaning, that portrait is only ever an imperfect reproduction of the subject’s image. Redefining a word, however, alters the word itself. Linguistically, the gallery opening isn’t just related to Freya; it is Freya, a version of Freya that Cory possesses absolutely. And what is a possession but a haunting of the body?

At its heart, then, The Whispering House is a haunted house story after all. Brooks has made brilliant use of genre conventions, integrating them into new and potent imagery. This novel isn’t just a strong entry into haunted house literary canon, but an active interrogation of it. The result is considered, beautiful, and genuinely disturbing. The Whispering House took up residence in me, and the questions it asks have continued to haunt long after I finished the last page. 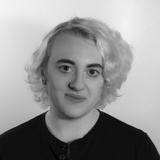 Johnny Gottsegen is a writer and actor living in New York City. He has acted in a variety of stage and screen projects, and his short plays have been featured in festivals. He is currently writing his first feature-length screenplay.

0
Johnny Gottsegen October 6, 2021
No Comments Yet