Daniel Borzutzky is a poet and translator who lives in Chicago. His most recent book is Written After a Massacre in the Year 2018 (Coffee House Press, 2021). His 2016 collection, The Performance of Becoming Human won the National Book Award. Lake Michigan (2018) was a finalist for the Griffin International Poetry Prize. His other books include In the Murmurs of the Rotten Carcass Economy (2015); Memories of My Overdevelopment (2015); and The Book of Interfering Bodies (2011). His translation of Galo Ghigliotto’s Valdivia won the National Translation Award, and he has also translated collections by Raúl Zurita and Jaime Luis Huenún.

Dolapo Demuren: Can you describe the life of this collection before publication? I ask while considering that Written After a Massacre in the Year 2018 includes a Lake Michigan poem that appears to be a nod to your 2018 collection Lake Michigan. Are you writing across collections?

Daniel Borzutzky: The collection really materializes as such in October 2018, after the shooting at the Tree of Life Synagogue in Pittsburgh, and a few months after the mass shooting at Walmart in El Paso. The final section of the book, whose poems are almost all titled “Written After a Massacre in the Year 2018” were written in the weeks that followed the Tree of Life Shooting, and I felt a real need to finish the book in 2018, as my own personal way of exorcising that year. The poems in the first two sections were written earlier in 2018, and were often engaging with anti-immigrant rhetoric and state and police violence; border politics; economic violence; data systems and questions of risk and security, among other things. These are issues that I’m always processing, and which appear in many of my earlier books. So, to answer your question, I think I’m always writing across collections, or the collections fold into each other. Also, before the book Lake Michigan there were Lake Michigan poems in my 2016 book The Performance of Becoming Human, which takes its title from a poem I wrote for a previous manuscript. Perhaps the life work of a poet is really just one big book?

DD: I’d love to hear about how Samuel Coleridge’s “Written During a Temporary Blindness in the Year 1799” fits into the timeline of the conception of the book.

DB: I’ve had the last line of Coleridge’s “Written During a Temporary Blindness in the Year 1799” jotted down in a notebook for several years: “To see is only a language” and I kept thinking about it: what does it mean to say something is “only a language”? What does it mean to say that vision has its own life separate from the one who sees? “Only a language.” Even a language is never only a language. I kept thinking about it intellectually, but I think the horror of the mass shootings of Fall 2018 led me to intuit the line’s force in a different and more visceral way, and I kept thinking about time, about writing “During” vs. writing “After” trauma. But really I wrote that section—the last nine poems of the book—in a state of shock where I was no longer thinking; pain and anger and horror made the words come out.

DD: In your poem “I Explain a Few Things,” the speaker shares, “The limits of my language   wrote Wittgenstein mean the limits of/ my world// But what did he mean by language and what did he mean by world.” As a translator yourself, how does the discipline of translation inform the composition of your poems? Have you grown more comfortable with the limitations of the English language? What kind of limitations do you believe you are pressing against as a writer?

DB: We are always faced with the limits of language and language’s inability to represent the unspeakable. But perhaps translation is about the wild possibilities of language, about compelling meaning and energy and rhythm and pain and love and beauty and horror to move across languages and cultures and borders and boundaries, thus perhaps it’s more about language’s elasticity than its limitations. At a different point in my writing life I might have said that my writing practice and my translation practice are inseparably intertwined. I don’t see it quite that way anymore. Right now translation enters my writing as another form of deep reading, as a form of influence, as an engagement with the work I care about most. I won’t translate a work unless I feel a deep connection to it, and most poetries that I feel a deep connection to enter into my work in some form or another. I also see translation as a small means of pushing back against the demonization and even criminalization of foreign languages, and I see it as part of a larger commitment to writing about and through the connections between the experiences of Latinx people in the U.S. and more broadly in the Americas.

DD: How does a poetry collection reveal itself to you? Do you go looking for your subject, or does it find you?

DB: I don’t think I go looking. I think the subject matter is the world around me, the world around us, the intersection of the personal and the collective. The subjects are always the same: violence, money, love, survival, the rhetoric of hatred, borders, risk, bureaucracy, trauma, writing, etc…

DD: I really enjoyed reading the poems in Written After a Massacre aloud and conforming to the rhythm in them. I felt like I was under the control of the poems. Anaphora is probably the most recurring poetic device employed in the book. How did the persistent use of anaphora support the vision you were trying to honor in this collection? Why was it integral to the world you were hoping to create?

DB: Anaphora for me is a way of growing into a poem, of finding its form and shape and energy and rhythm and life and figuring out how it will move. It’s present in most of my books. A not-so-complimentary critic once referred to my writing as: “the unpoetic rantings of an ideologue.” Anaphora is ranty. As you say, I think it can be hypnotic. The murmuring madness of the world does not disappear. It only intensifies. Anaphora of this kind lives in the body and the body performs each bit of the poem before it’s ready to appear on the page. Theme and variation converge at the intersection of boredom and joy.

DD: This question is an attempt to get a free masterclass from you. You use repetition as a device in virtually every poem. You repeat phrases (like “block of ice”), you repeat images of violence committed to the human body either by brute force or systematic mistreatment (like lead in drinking water), and you repeat verbs (like “murmur”) across poems and across sections. As students, we hear that if something is repeated—that means it’s important. But I’m interested in the importance of repetition itself. How crucial is this device to poem-making? What do you feel it brings readers closer to?

DD: In Written After a Massacre, the body endures many atrocities. The body is broken and the body is drowned. Bodies are traded for petroleum and state secrets. Bodies are objectified, racialized, and missing. Even though the body suffers in this collection, I feel that the body is center stage because of how sacred the speaker of the poem believes the body to be. Your poems can be read as a counter to the desensitization of violence towards the human body. Would you say poetry has the responsibility or just the opportunity to be a counter?

DB: I’m uncomfortable with declarations of responsibility. I try to write about what is most important to me, and what is most important to me is the way in which state and economic violence do real damage to actual people and their actual homes, communities, and bodies. Maybe to answer your earlier question about how a poetry collection reveals itself: I don’t know that content is something we choose. People often say there is something called “the political poem.” Which makes it sound like some poems are about politics and others are about trees or relationships or nature or mountains or language or repetition. This feels wrong to me. What you care about appears in your poetry not simply as subject matter, but rather as a force that shapes the way you speak and see the world, as a force that comes out as rhythm and energy and which, for me, ought to try at least to be as powerful as the forces it is writing ‘against.’ This is impossible. But worth pursuing nevertheless.

DD: In the “End Note,” you mention that writers are perhaps always writing after a massacre. Interpolating a quote from César Vallejo, you express how the response to the blows of atrocity seems to be “I don’t know, I don’t know, I don’t know.” You use a phrase in the opening dedication of the book that you also repeat in the closing section: “a love that survives.” Knowledge, of how to adequately manage after a massacre, doesn’t follow, but love survives atrocity. What were you hoping to convey through that phrase? 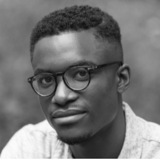 Dolapo Demuren is a Nigerian-American writer from the Washington D.C. metropolitan area. He received his B.A. in Writing Seminars from Johns Hopkins University and M.F.A from Columbia University. He is a doctoral student in Education at the University of Southern California. His honors include a fellowship from the Cave Canem Foundation and The Academy for Teachers, as well as scholarships from the Bread Loaf Writers Conference. His poems and other writings are featured in the Adroit Journal, Frogpond Journal, Prelude Magazine, and Small Orange Journal.