What was 1996? And what is it to us who now stand steeped in the pathogen and plastic and paranoia of now? Twenty-five years ago, gas was cheap and college was relatively affordable. We were three years away from Y2K, four years from Florida’s Votomatic nightmare, and five years from 9/11. We were into irony and soup served in bread bowls. We wanted synthetic fabrics and synthetic drugs. We had survived hair metal’s demise, grunge’s implosion, the unsolved murders of Biggie Smalls and Tupac, and the arrival of Spicemania. The internet was only for the lonely who wanted to chat with other lonely people with names like WaffleMan7675 and PrincessStarfish123. Our favorite film was Independence Day. Our favorite song was “Macarena (Bayside Boys remix).” We wanted to dance and we wanted to watch our world end in flames.

So there was something strangely familiar and deliciously destructive to be found when George Saunders’s CivilWarLand in Bad Decline appeared in January of 1996. This collection full of uncanny horror and hilarity felt apropos of everything we had been wanting: sailors who waltzed together after rescuing a suicidal corporate saboteur from drowning and a gang-besieged historical theme park torched for insurance money. That year was the year that solidified the presence of homegrown all-American terror. There had been the Oklahoma City Bombing and then there was the Centennial Olympic Park bombing and the arrest of Ted Kaczynski. Before those, the police beating of Rodney King, the Los Angeles riots, and the O.J. Simpson trial. Waiting in the wings: Columbine, the impeachment of Bill Clinton, Travelocity, Amazon, and the unholy fusion of Carlos Santana and Rob Thomas. All of this, I admit, is circumstantial, and none of this means anything other than a lot happened back then, as a lot always happens no matter the time. With hindsight, however, it’s clear that we were, with or without our knowledge, growing more anxious and distant as a people, bifurcated by fear and desire just as Saunders’s characters were bifurcated by fear and desire. As Thomas Pynchon wrote, Saunders told “the kinds of stories we need[ed] to get us through [those] times.” And indeed, we got through them. But nowadays those stories he wrote feel an awful lot like these times.

All of which is to say, we have arrived in a very Saundersian future. And while I love his work, while I still love many of the stories included in his first collection, I did not love rereading this book. Let me explain.

Saunders’s debut surfed into bookstores on a wave of Burning Man-bred male anxiety that featured the likes of Chuck Palahniuk and Alex Garland, but his work lacked their macho bluster, their homoerotic fascination with violence, their nihilistic nostalgia. In Saunders’s stories, there was no fighting back against the middle managers of America and there was no retreating to hidden tropical islands run by charismatic cult leaders. Instead, there was just work—soul-crushing, low-paying, morally bankrupt employment from which there was no escape. This Catholic fatalism (more on that in a bit) was paired with the earnest, first-person (always first-person) voices of his Sisyphean protagonists, all doomed to roll their absurdist boulders up whatever corporate hillsides they could find. It was a winning combination: the aw-shucks deadpan of the Midwest braided with Stations of the Cross pathos as Saunders’s semi-lovable losers were crucified by poor wages and healthcare, faithless lovers and conniving coworkers, racist neighbors and psychologically damaged siblings. And though it may not sound like it on paper, the collection was very, very funny. I mean, how can’t you be charmed by the ghost of a Union soldier going “head-to-head” with a hologram of Jefferson Davis or a “brother/sister psychiatric practice” called “GuiltMasters”?

But this time around, it wasn’t that funny. Something changed. Actually, many things changed. They’re still changing. I don’t need to go into detail. You know what changed.

Reading CivilWarLand in Bad Decline in 2021, I was overwhelmed by its hopelessness. The laughs, while still present, were bitter as burnt toast. I hadn’t before noticed how awash the stories are with a Catholic sense of suffering—agony, debt, and penance reign supreme—as if we’re being led through some futuristic Missionaries of Charity charnel house with an animatronic Mother Teresa as our guide, imploring us to remember the beauty in pain as she ushers us past the wretched and into the gift shop.

Saunders’s worlds are squarely (if unevenly) divided between the haves and have-nots, the winners and losers, the gleefully craven fortunate and the self-hating damned. There’s an almost medieval hierarchy at play (as would later be explored in detail in that fantastic exercise in chemically enhanced voice, “My Chivalric Fiasco”) with the subjugation and scapegoating of people based on their appearance or class (mutant, as seen in “Bounty,” or pauper, as seen in nearly every other story), along with increasingly horrific depictions of the obscenely dehumanizing privilege that wealth allows for, not to mention the cloying corporate doublespeak that has now infiltrated every corner of administrative culture—that condescending, faux-polite messaging that enforces how little the higher-ups care for you even as they profess said care.

Still, as would later become a hallmark of Saunders’s work, there’s an evenhandedness to the proceedings as he dares us to see the good (or bad) in seemingly unredeemable (or potentially redeemable) characters, the most powerful example of which is in “Isabelle,” where “[t]he first great act of love I ever witnessed was Split Lip bathing his handicapped daughter.” Saunders pulls the rug out from under our expectations as Split Lip is revealed to be a Derek Chauvin-style police officer who is also an excellent father to a daughter the neighborhood boys call “Boneless” because of the way “she looked like a newborn colt, appendages folded in as she lay on the velour couch protected by guardrails.” This uncomfortable complexity, however, falters when the juxtaposition feels forced or ultimately pointless, as is the case in “The Wavemaker Falters,” where a wave machine operator who crushed a boy to death at a waterpark endures humiliation after humiliation until he finally declares, “this is as low as I go,” which may be true, but given that we aren’t told what happens next (and going on the expectations impressed upon us by previous stories) I can’t imagine his promise lasts long.

This raises the question: What exactly can we hope for by way of mercy in this world? In the title story it’s thinking of your children as you’re butchered by a crazed Vietnam vet, in “Isabelle” it’s taking care of the innocent daughter of a racist, murdering cop, or in “Offloading for Mrs. Schwartz,” it’s selling your consciousness so you can start again as a blank slate, free of the burdensome past and reborn into a present unencumbered by it. But the major question I had when rereading this is why do Saunders’s characters keep going? Just as Mary is prevented from killing herself in “Downtrodden Mary’s Failed Campaign of Terror,” there is no respite from the many slings and arrows that Saunders keeps pitching. His characters keep going no matter what without ever really determining why.

Saunders would later fully flesh out this question in “Escape from Spiderhead,” (which has, mind-bogglingly, been made into a movie starring that most Saundersian of actors, Chris Hemsworth, and filmed in that most Saundersian of places, the Gold Coast of Australia, by that most Saundersian of directors, Joseph Kosinski of Tron: Legacy and Top Gun: Maverick fame, and produced by one of the—honestly—most Saundersian of companies imaginable, Netflix…I hope George got millions) which definitively if depressingly stated that the most redemptive act anyone can perform is self-sacrifice for the sake of another. In that story, there’s a Christ-like nobility to such a surrender as it’s based in no longer wanting to harm anyone, but in CivilWarLand in Bad Decline, Saunders hadn’t yet tapped that rich combination of voice and psychological depth that would allow him to explore such ideas in such powerful ways. That said, this collection does nail the overwhelming six-sigma supremacy of 1990s office culture, particularly in “The 400-Pound CEO,” when Jeffrey, the 400-pound CEO in question, wonders if the corporate structure of the celestial kingdom is what has kept God from answering his prayers. “Maybe the God we see, the God who calls the daily shots, is merely a subGod. Maybe there’s a God above this subGod, who’s busy for a few Godminutes with something else, and will be right back, and when he gets back will take the subGod by the ear and say, ‘Now look….What did he ever do to you?’….And maybe as the subGod slinks away, the true God will sweep me up in his arms, saying: My sincere apologies, a mistake has been made. Accept a new birth, as token of my esteem.” Here, Saunders moves away from Catholicism and into Buddhism to give a sliver of a silver lining: the hope that the suffering of this life will offer a shot at something better the next time around.

Ultimately, and despite the times I reread it in, CivilWarLand in Bad Decline has lasted the test of the last twenty-five years, if only for its title story, which remains a stone-cold classic—a story so good that it eclipses everything else in the book. But in addition to that story, there’s also the humanity of Saunders’s work: No matter how pitiable or maligned, it’s clear his characters deserve better, that we all do. At the end of “Isabelle,” Saunders’s argument on the necessity of selflessness and the importance of family (whether actual or chosen) is made clear as Crystal Pepsi when the protagonist adopts Split Lip’s daughter. “So I got a little place and moved her in with me. Now we’re pals. Family. It’s not perfect. Sometimes it’s damn hard. But I look after her and she squeals with delight when I come home, and the sum total of sadness in the world is less than it would have been.” There you have it: one match’s worth of kindness struck against the darkness of an oppressively cruel and selfish world. Not much, but it’s something bright when everything would be so very dark if not for it. 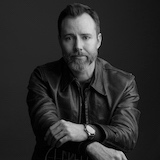 Adam O. Davis is the author of Index of Haunted Houses (Sarabande, 2020), winner of the Kathryn A. Morton Prize in Poetry. His work has appeared widely in journals and anthologies, including most recently The Believer, The Best American Poetry 2021, The Cincinnati Review, Dark Mountain, and Prairie Schooner. A recipient of the 2016 George Bogin Award from the Poetry Society of America, he lives in San Diego, California, where he teaches English literature at The Bishop’s School.