Is there such a thing as too much good poetry? My uncle, who made a lifelong habit of sending me copies of each of W.S. Merwin’s books upon publication, thought so. “He writes too much,” my uncle would lament each year when the Nobel Prize for Literature, one of the few major prizes to elude Merwin during his long literary career, was awarded to some other writer. In a career as prolific as Merwin’s—more than fifty books of poetry, prose, and translation, including multiple literary masterpieces—it stands to reason that not every book can be a great one. Right?

Consider Merwin’s 1996 collection, The Vixen. Coming on the heels of Travels: Poems, winner of the 1993 Lenore Marshall Poetry Prize, The Vixen is in many ways a quiet book. While the poems in Travels are set all over the globe and vary considerably in form, length, and even appearance on the page, the sixty-four poems in The Vixen, most of them no longer than a page, follow a single form: a long line that starts at the left margin, followed by a second, indented line (which is sometimes enjambed and sometimes syntactically independent of the preceding line), mimicking the appearance of call-and-response on the printed page. (In his original review of the book for Boston Review, poet and critic Richard Howard called it “one poem in 64 sections.”) The look of the poems is neat, tight, controlled. “Quiet” and “controlled” are not synonymous with “lesser,” of course, and for anyone seeking poems that nourish and challenge, The Vixen offers a rich bounty.

The poems of The Vixen are set almost exclusively in the Dordogne region of France, where in the 1950s Merwin bought a dilapidated farm and house that he tended well into the twenty-first century. The poet’s concern with the land, its history, its current state, and its preservation informs the entire collection. Poems such as “The Time Before” and “Ancestral Voices” explore ancestors and inhabitants, both human and natural. Merwin doesn’t just observe, but asks what it means to see, and also whether seeing implies responsibility. In “Bodies of Water,” for example, the poet probes notions of human stewardship, caretaking, and cultivating the land, themes that underlie many of the poems in The Vixen (and, indeed, much of Merwin’s work during the three decades preceding its publication). The term ecopoetics, not yet in broad usage in 1996, could easily have been coined to describe the ethical universe Merwin explores here.

And yet. It feels not just anachronistic but reductivist to slap a tidy label such as “ecopoetry” on this collection. Merwin writes with steadiness and assurance, and he’s much too fine a craftsman to allow slogans, no matter how timely and urgent, to masquerade as poems. In poems such as “Emergence,” he chronicles the natural world through the passage of time and the seasons, refracted through the vision of one who is only a temporary visitor, always flying in from “altitudes at which nothing / can survive” and returning to “alien cities” and “sleepless continents.” The similarly meditative “Oak Time” measures the seasons not in the span of a human life, but in the life of a tree, a witness to human depredations, true, but much more concerned with birds and animals and the creeping ivy “that prophesies disappearance.” Other poems, such as “The Red,” which centers on a memorial to victims of Nazi atrocities, concern themselves with human disappearances. Sometimes, as in the book’s opening poem, “Fox Time,” Merwin creates parables that ask about human responsibility for the “chain of consequences” once a person perceives it—the enigmatic answer, according to the poem, is “That person sees it as it is.” Indeed, the human protagonists of poems such as “Possessions”  and “After Fires” disappear like a wisp of ash, leaving only the memory of a pink ribbon. In “Distant Morning,” Merwin paints a landscape where humans exist in “a time of our own” and disappear from the poem as the kite flies over the river, the owl “clenches itself in the oak” and the night creatures go home to sleep, noting that “none of it could be held or denied or summoned back / none of it would be given its meaning later.” The vixen of the book’s title may be one vixen or half a dozen, a creature who passes through the poems at the edge of the speaker’s gaze and is gone, beautiful and fleeting, like love. The vixens in “Fox Time” and “The Vixen” are simultaneously totemic for the speaker of the poems and oblivious to human concerns—that duality is part of their allure.

As always with the mature Merwin, The Vixen offers a master class in poetic technique. Here, the poet explodes the rigid boundaries of lyric and narrative, combining the two in poems such as “Passing” and “The Shortest Night.” He also includes a few persona poems, among them the striking “Peire Vidal.” The power of Merwin’s writing often rests in repetition and intensification of phrases, questions, and if-statements, such as the anaphora of the “this” clauses in “Season.” His signature lack of punctuation works particularly well in these short poems that mimic call-and-response, a form that highlights the music of the lines as well. Often, Merwin’s is a poetry of empty spaces and negation, wherein people, objects, and life forms evoked but not present provide a framework for reflection, as in “The View,” “Portrait,” and “Old Sound.” As a writer, Merwin is self-aware without being self-conscious; he is not interested in the cynical or self-referential; his poems are resolutely un-hip.

Merwin has sometimes been criticized for pushing language beyond its limits, and that risk-taking is evident in The Vixen. Here, the poet is willing to freight simple words (“time,” “home”) almost to the breaking point, as in “Completion.” In poems such as “The Cisterns,” the simplicity of his language and imagery threatens to become—but never quite devolves into—cliché. In the title poem, “Snake,” and many others, animals and inanimate objects are endowed with significance; here and in “The Shortest Night” and “Upland House,” Merwin practices a particular kind of mythmaking rooted in an appreciation of the here and now. He consistently looks for the inner significance of things, as in “The Furrow,” a short poem that reflects on manmade objects (coins, bone buttons, shoe nails, bits of plates) turned up in the garden as the speaker plants new seeds. This layering of perspectives—point of view, time, season (especially actual and metaphorical autumn, when many of the poems are set), the telescoping of short- and long-term—demands both patience and attention from the reader. When they work, which is almost always, the poems shimmer with meaning and nearly defy analysis—the magic is palpable.

No book is perfect. In The Vixen, one can quibble with the publisher’s choice of typeface, which makes the poems appear cramped on the page, emphasizing their compression and density in both form and substance. And while the many pleasures of reading the book include glimpses of Merwin’s well-stocked mind—his broad awareness of languages, European history, Buddhist cosmology, troubadour poetry, Renaissance poetry, and Native American history, as well as his fascination with craft and the work of human hands (stone work, forging, planting and harvesting—see especially “Romanesque”)—the book could only have benefitted from endnotes. But even at a remove of twenty-five years, The Vixen remains fresh; its central concerns about human awareness of our place on the planet and our responsibilities as its stewards are, if anything, even more urgent today than when the book was written. Very little poetry is timeless: The Vixen may be as close as a poet can come. 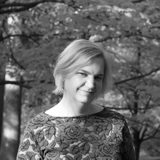 Katherine E. Young is the author of Woman Drinking Absinthe and Day of the Border Guards and editor of Written in Arlington. She is the translator of Anna Starobinets, Akram Aylisli, and numerous Russophone poets; she was named a 2017 National Endowment for the Arts translation fellow. From 2016-2018 she served as the inaugural poet laureate for Arlington, Virginia.