Often, the highest compliment for a portrait is that it manages to reveal the person’s imperfections, warts and all—especially of the recently deceased, and for all of their sacrosanctity. This is true of the portrait which Michelle Zauner paints of her mother in her memoir and debut publication Crying in H Mart. But what is more remarkable about this portrait is the overwhelming sense of love and adoration between mother and daughter which the book both grieves and exalts. The memoir imparts a sense of love which compels me beyond the point of recognizing my own mother in Zauner’s. Rather, it leaves me in awe of how Zauner has also drawn me into mourning the death of her mother Chongmi, who passed away of pancreatic cancer so many years ago in 2014.

Through Zauner’s prose, we waver between the contradictory sentiments of estrangement and intimacy toward her mother, paralleling Zauner’s own characterization of her maternal relationship. She remembers her mother telling her, happily, “I’ve just never met someone like you, as if I were a stranger from another town… It was a strange thought to hear from the mouth of the woman who had birthed and raised me, with whom I shared a home for eighteen years, someone who was half me.” As Zauner elaborates, she and her mother had just recently reached a point of mutual respect for each other’s innate differences, which would have formed the foundation for a deeper bond: “Then, what would have been the most fruitful years of understanding were cut violently short, and I was left alone to decipher the secrets of inheritance without its key.”

Michelle Zauner is famous as the lead singer of Japanese Breakfast, self-described as “dreamy, shoegaze-inspired indie pop.” Its first album Psychopomp was composed of songs which Zauner had written in the weeks after her mother’s death, and many of them in her mother’s memory. Zauner admits how she had spent five years trying to make it as a musician, and it was only after she decided to settle down with a corporate nine-to-five after her mother’s death that her new album blew up. But Zauner’s book is not very much about music at all, or at least, about much more than music. Crying in H Mart travels across a variety of registers, from food and fashion to race and religion. As much as it is a linear narrative, the memoir also feels like an assemblage of literary vignettes which remind us of the innumerable ways in which Zauner misses her mother. Through these fascinatingly odd juxtapositions, Zauner reproduces the feeling of how grief always rears its head in the most unexpected places: “I can tell you with a straight face what it was like watching my mom’s hair fall out in the bathtub, or about the five weeks I spent sleeping in hospitals, but catch me at H Mart when some kid runs up double-fisting plastic sleeves of ppeongtwigi and I’ll just lose it.”

The wave of Asian American food memoirs in recent years, from David Chang’s Eat a Peach to Tung Nguyen’s Mango and Peppercorns, is astounding in light of the history of Asian American cultural representation. Frank Chin had once blistered against how Asian American writing was limited to cookbooks, and how racial identity was reduced to matters of food: “I’m going to write the great Chinese American Cookbook… cuz no one’s gonna read the great Chinese American novel.” It is remarkable that writers such as Zauner have carved out the political space to write about food in ways which do not cater to a white audience through explanatory asides of what ppeongtwigi is, and can write about their personal attachments to their childhood foods with touching sincerity. In this sense, the themes of Zauner’s food memoir can also be traced back to Chang-Rae Lee’s set of New Yorker essays, in which he mourns his mother’s cancer and untimely death by remembering the different feasts they had shared. What is provocative about Zauner’s memoir is how explicitly she links food with racial and diasporic longings for a sense of home. At times it seems as if Zauner wants to claim her racial heritage on the basis of food—“I can hardly speak Korean, but in H Mart it feels like I’m fluent”—but we might more subtly read her food obsessions as the psychic field upon which she troubles her internalizations about the supposed synergy between ethnic food and cultural authenticity. As Zauner confesses, in H Mart, “I’m collecting the evidence that the Korean half of my identity didn’t die when [my mother and my aunt] did.”

In writing about food, Zauner is thinking about not only her racial identity, but also about how much her mother loved her. Memories of her mother’s love in fact dominate Zauner’s memories of her mother altogether. At these moments, Zauner risks being seen as not only egoistic but as also conveying a one-dimensional portrait of her mother—but does so in the pursuit of unabashed honesty. Zauner describes her initial desire to portray her mother as “so much more than a housewife, than a mother. That she was her own spectacular individual. Perhaps I was still sanctimoniously belittling the two roles she was ultimately most proud of.” After her mother passes away, Zauner looks through childhood photographs of herself as a way of thinking about her mother, who is just outside of the frame. In a lush philosophical passage which rivals Roland Barthes’s writings about photography, Zauner realizes, “How cyclical and bittersweet for a child to retrace the image of their mother. For a subject to turn back to document their archivist.”

But even before this project of turning upon the mother-archivist, Zauner was already troubled by the reversal of roles during her mother’s struggle with cancer. How does one care for the caregiver? And how are the living to wait upon the bedside of the dying? In her characteristically bold language, Zauner admits to her own self-absorption upon learning about her mother’s diagnosis: “I would repay her for all the debts I’d accrued. I would be everything she ever needed. I would make her sorry for ever not wanting me to be there. I would be the perfect daughter.” Instead, Zauner realizes that she cannot do enough, that she cannot take on her mother’s pain, that she cannot stop her mother from dying. Zauner’s prose is both sober-eyed and harrowing in its descriptions of the progression of her mother’s cancer, the exhaustion of her mother’s caretakers, and the bewildering grief which consumes their family.

This incredible memoir is never funny without also being heart-rending. Such as when Zauner rushes her wedding for her mother’s sake, while her dying mother tells Zauner to make sure that her fiancé buys an engagement ring from Costco. Or when after mother’s death, Zauner makes inordinate amounts of kimchi as an alternative form of self-care to avoid the costs of therapy. In her intensely detailed sketches of food and home, Zauner pays tribute to all the ways her mother had cared for her, and all the ways Zauner overlooked this care until it was too late: “that was how my mother loved you, not through white lies and constant verbal affirmation, but in subtle observations of what brought you joy, pocketed away to make you feel comforted and cared for without even realizing it.” 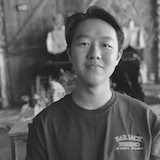 Sydney Van To is a PhD candidate in UC Berkeley's Department of English and the Deputy Editor at diaCRITICS. His work has been published in Asymptote, Asian Review of Books, and The Chicago Review of Books, among others. He also has a forthcoming chapter on "Refugee Noir" in the Routledge Handbook of Refugee Narratives.