While living a year in Berlin, my family decided to spend some time on Rügen, an island in the Baltic Sea. We drove because we wanted to visit also the small port cities along the border with Poland and meander back to Berlin through the country roads of northeastern Germany.

No matter what you want to do for pleasure or release in Germany, you are never far from the war. A historical marker on a pier or internet search, for instance. The Nazis had a thing for clean living. They encouraged summer retreats, vacations, healthy activity. They liked their summer cottages.

The region around Berlin and much of the area north of Berlin is dotted with a series of lakes, many are interconnected via canal. Someone once told me it is possible to kayak from Berlin to the Baltic.

The shore of the resort towns own that faint waft of municipal waste and ageing septic, and the water owns the legacy of shipping and nitrogen from farm run-off. Despite the lure of midsummer, the place has a monochromatic quality: low gray overcast and the slate water and what is there and what you dream. It is visually appealing, the way Rothko is.

Sachsenhausen is the concentration camp closest to Berlin. There was a crematorium and rooms dedicated for medical experiments. From the train station, you have to walk through a small village to get to the camp. It is a non-descript village, except for a fairly good ice cream shop. What does it say to a child when the only thing you can think to do after you show them how horrific the world can be is to take them for ice cream?

On the ride home from the Baltic, we found ourselves on the back roads around Sachsenhausen. It is striking how much this area reminds me of New Jersey’s Pine Barrens: black pine, sand, flat lakes, berries. It is the landscape of my childhood imagination and what I think must be the landscape of some German fairy tale, where breeds some notion of surviving and the risk of not surviving. Berries amid the ash-laden needles of a pine forest.

I never believed in a stream of consciousness. I never believed my mind was that coordinated. I don’t know how others think, but it must be similar to my own: slapdash, loose but necessary connections, a constellation of dissonance seeking a shape. Some days, I struggle to find that shape or understand how to value that shape.

The making of “Midsummer Gray” embodies the poem as my way of thinking. The fragment of image, language, fact that is dedicated to the artifice of the real, the refusal to relieve that art from some context (narrative, cultural, personal), a persistence to locate it in some stake, a recognition of its resilience as well as its time-borne and morally ambiguous precariousness. 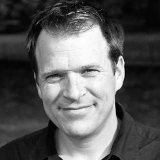 James Hoch’s previous books are Miscreants (Norton) and A Parade of Hands (Silverfish Review Press). Last Pawn Shop in New Jersey from LSU, and Radio Static from Green Linden Press are both due out in Spring 2022. His poems have appeared in POETRY, The New Republic, Washington Post, Slate, Chronicle Review of Higher Education, American Poetry Review, New England Review, Kenyon Review, Tin House, Ploughshares, Virginia Quarterly Review and many other magazines, and has been selected for inclusion in Best American Poetry 2019. He has received fellowships from the NEA, Bread Loaf and Sewanee writers conferences, St Albans School for Boys, The Frost Place and Summer Literary Seminars. Currently, he is Professor of Creative Writing at Ramapo College of NJ and Guest Faculty at Sarah Lawrence.