At the start of her poem, “American Wake,” from her poetry collection of the same name (her second full-length collection of poetry), Kerrin McCadden writes, “Hold a wake for the living, the leaving.” Living, as any good elegist knows, is a prelude to leaving, yet there is usually a good bit of distance between the two. However, in McCadden’s richly layered work, living and leaving edge so close that their vowels start to bleed together and it’s like the reader is staring at two identical twins and trying to remember their names: “Now which one is Living, and which one is Leaving?” The conundrum is abundantly pleasurable: one, an aspirational direction, gerunded into perpetual exit, while the other conjures up the complicated, difficult, present moment as an exercise in Be-Here-Now.

The experience of reading so many of McCadden’s finely crafted poems of loss might easily inspire a reader to think of Elizabeth Bishop’s classic poem, “The Art of Losing,” the villanelle that spins a reader around in ever-widening circles of loss until they are pleasantly disoriented, but also fairly convinced that everything is loss and we will soon lose everything. Such an experience might cause some to exclaim: “So depressing!”

And yet, is it? No, it is not depressing at all; the experience of reading McCadden’s work is incredibly enlivening. In “The Art of Losing,” Bishop says, “Then practice losing farther, losing faster: / places, and names, and where it was you meant / to travel.” McCadden follows this dictum, and proves herself an unquestioned master; she loses Ireland, her ancestral homeland, over and over again, and while returns do happen in the book, they only elicit new losses, but these losses feel like a reader’s gain.

“In Leghowney, Donegal” is one such poem of Irish return. The speaker recalls the story of “my little grandaunt” who is caught in a March rainstorm, and then suddenly and accidentally catches fire while she is trying to warm herself by the school’s woodstove.

The reader can almost see the physical details of the grandaunt’s story float in front of their eyes like history incarnate, like the only tangible pieces of memory that exist from this person’s life. The weight of this absence weighs on the speaker until the poem ends:

The speaker’s despair is not solely because of the grandaunt’s horrific fate; even more so it’s because her grandaunt’s life’s shocking details are just one in a litany of women’s nameless erasures, women “gone missing” or “burned in a pile of tires.” So much so that the speaker can do nothing “but almost / get lost in time.” The word “almost” is key here; almost but not quite, almost but the getting lost does not completely occur, because the woman the speaker talks to at the end of the poem surprisingly remembers the speaker’s family. Suddenly, the same details and horrific story that had once seemed callously representative and reductive become the rungs on which this woman climbs the ladder of memory back to find the speaker’s family. It’s a stunning moment of acknowledgement between strangers made even more powerful because of the poem’s lack of punctuation, causing all those important details to run together into a seamless unified whole.

McCadden’s use of syntax within the poetic line is often thrilling, whether she achieves the effect through the removal of punctuation, as in the above poem, or through carefully phrased lines that resonate with possibility, as in her poem “What I Have Lost at Sea.” McCadden’s masterful art of losing is again on display in this poem that seeks to elaborate upon the title as an inverted question in the poem’s first line: “What have I lost at sea.” The “you” of the poem insists upon an answer, a quantifiable measure of grief helped along by the possibly pedantic explanation of the difference between flotsam and jetsam. The speaker resists and swerves away into thoughts of generosity and “the octopus walking on two legs.” One gets the sense that the you of the poem does not appreciate the poet’s digressions, and yet the digressions are not from a lack of focus or an attempt to frustrate; it’s simply that loss, as the speaker sees it, is ubiquitous and total. Unquantifiable. The poem ends:

I think finding anything in the sea
would be impossible. I am not at sea.
I have lost everything here.

It’s in McCadden’s last line where her syntax unfurls its richness. Does she mean that of all she has lost, she has lost it all here, and not at sea? This loss feels like it exists in a parallel realm to the sea, in some space equally vast, wherever “here” is, whether that be on land or in other realms of the speaker’s world. Or does she mean the more totalizing—she has lost everything (as in all she owns and knows) here? Like the ambivalent relationship between living and leaving, the poems are enriched by this complexity.

To return one last time to “The Art of Losing,” Bishop ends her poem in near devastation when she addresses the beloved: “Even losing you…” And despite the speaker’s protestations, we know the loss of the “you” was, if not devastation, pretty damn near it. McCadden’s “you” is her brother.

The brother’s death is not unexpected. His troubles are of the too often untouchable nature of the addict, and the brother always appears at an addict’s distance, but the poet’s love for him is up close and personal. The numerous poems about the brother are prismatic in that they refract the brother’s life into a spectrum of colors, a wide variety of poems. The reader comes to know so much about him: the brother is a mountain, a river, he loves satin sheets, he can’t swim, his teeth fall out, he knows the tune, he has a mohawk, he’s the handsomest man the narrator has ever seen, his ashes are divided in half. The brother dies over and over throughout the book, and in fact, McCadden writes at the start of “When My Brother Dies,” “It happened already. It has happened five times / and will happen again. My brother is dead.” Despite this spoiler, it’s still a surprise when he dies yet again towards the end of the book in the poem “Planetarium.” And then he dies again in the next poem, “Losing,” and then again in “Mass General.” And then his death happens backwards in “reverse overdose,” perhaps the most expansively biographical poem for the brother as we see him struggling throughout his life, but also playing hockey and telling his sister “he came from / a dinosaur egg.” Grief warps time, and the unbelievable is a wound that stays open forever, so that it is experienced over and over again, because to suffer makes sense. The dead are always, as McCadden says at the end of “The Dead,” “unbearable and new.” With this unbearableness, poetry can create something out of language that is immortal but also impossible, though no less powerful because of impossibility. Even if poetry doesn’t touch the suffering, it helps the suffering make sense. In this way, prolonged suffering makes sense, because the living are always leaving. It is an ongoing process.

There are so many remarkable poems in American Wake. While the poems about her brother make up the spine of the book, many of the book’s truly stunning poems seem to come out of nowhere and have little or nothing to do with her brother, full of lines that exude a pure poetic magic. For instance, in the middle of “Awake,” McCadden says, “I ride a train / and write and keep crossing out the word rather.” Here is a subtle beauty, the kind of line that makes me want to laugh and shout and underline three times. Towards the end of “Awake,” McCadden writes, “Somewhere, / someone finds me phenomenal.” Well, that somewhere is here; I find Kerrin McCadden phenomenal. McCadden ends “Awake” with the line: “I forget who is playing for fair and who for keeps.” Let me tell you, Kerrin McCadden is definitely playing for keeps. 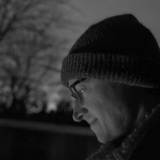 Jefferson Navicky is the author of a book of modern parables, Antique Densities, as well as the poetic novel, The Book of Transparencies, and the story collection, The Paper Coast. He works as the archivist for the Maine Women Writers Collection, and lives in Freeport, Maine.