Long before I truly understood how to play with light, and long before I understood how to use a camera, I had a natural eye for composition. Before I knew about aperture and shutter speed, I was taking photos on my Samsung flip phone (yes it is now a prehistoric device, and no I was not taking pictures of dinosaurs). Composition being my very first photographic skill, shapes became something that ruled my world as a photographer.

In the beginning, I never took photographs of humans. I was more interested in geometric shapes and patterns. For me, the urban landscape was the perfect playground. During that time, my best photos were taken in my hometown of Chicago, an architectural treasure. I would take photos of buildings and crop them to the point of abstraction so that all one could see was shapes, patterns, colors, and textures.

Little did I know, this practice was closely aligned with my interest in design and fashion. Over the years, my skills expanded and grew refined, and now, composition is not my primary skill, but just one of many components that make my photographs uniquely my own. I selected this group of photos, all produced in 2021, all of which get most of their power from shapes.

“Cozy Shapes In East Oakland” is the photograph that most resembles how I started out as a photographer. This photo was taken near 38th Street and Foothill in Fruitvale. The entire image is actually a reflection in a storefront window. Even as I was just passing by, it caught my eye. The dull coloring of the building, the clumsy jumble of shapes, lines, and angles like puzzle pieces came together in a way that immediately put me under a spell. Like a stroke of divine luck, the shadows gave the scene its life, its moody vitality. I added a good deal of texture in post-production to give it more life, to make it more nostalgic, to transform something I had just happened to glance at on my way to someplace else, into a dream.

“Dance 2” I was hired by a sustainable fashion designer named Sophia Marie to photograph two models sporting her clothing. The chemistry between the entire crew was great from the start. We shot this on the docks in West Oakland to complement Sophia’s industrial post-apocalyptic sensibilities. Both models, Tianna and Michael, knew exactly how to interact with each other to give us the look we needed. I love the natural sensuality that they both carry on their own and how they were able to put it together in a scene. While shooting, I noticed the white criss-crossing marks on the ground. They match similar marks on Michael’s jeans, so I thought it would be great to work with that somehow. I got up on an elevated platform and took photos of them below me. In post-production, I blended a series of these photographs together. You can see the full image on my Instagram, however I love the cropped version just as much as the full. I just love the saturation of the colors, the grit, the sensuality, the closeness, the intimacy, and the urgency of it all. You can almost smell a mustiness like the image is beginning to sweat.

“Food Fight” At the end of 2019, my friend Rachel Wolfe-Goldsmith and I organized a food fight in West Oakland using leftovers from a catering company and food that was going to be thrown out. It was a pretty wild event, as expected! There was a punk band that played between rounds of fighting and shots of whiskey. We built an enclosure out of thick plastic and photography stands, then we cut holes in select parts of the plastic walls so that I could safely poke my lens through the holes and take photos. It is always so gratifying to be able to capture moments of intense action such as this, because there is so much energy packed into such photos. They always tell a story, and they always leave more for the imagination as well. I revisited this photograph in 2020 and again in 2021 to retouch it. With composition we will sometimes notice that much of the weight is stacked on one side of the photo and it is balanced with negative space on the other side. For this photo, and all of the other images in the food fight series, I chose to add a translucent colored shape to the negative space to give it more pop without completely erasing the negative space and crowding the image too much. It is really fun when I am able to involve many components to one image like this, such as shapes, color, life, movement, and a story. 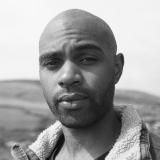 Rohan DaCosta is a multi-disciplinary artist from Chicago, based in Oakland, working primarily through photography, writing, and song. His book, The Edge of Fruitvale, was published by Nomadic Press on April 28, 2018, and has been nominated for a California Book Award and a Pushcart Prize. His portrait photography has been featured at The Flight Deck Gallery, Root Division Gallery, and Joyce Gordon Gallery, and Mercury Twenty Gallery. In 2018, he was awarded the Individual Artist Funding Grant by the City of Oakland for his arts exhibition, Trap : Trauma : Transformation (April 9 – May 18). Rohan currently serves as a board member on the Alameda County Arts Commission.