I’m a big fan of Time Team, a British reality show that follows a group of professional archaeologists around Great Britain as they investigate rumors of the past. Some episodes, digging in a small backyard, they find a potsherd. In others, they uncover in a cornfield a heretofore unknown Saxon settlement of national significance. There’s no sensationalism or manufactured interpersonal drama. My joy of viewing comes from admiring the cast members’ commitment to method in the face of uncertainty, in appreciating what limited knowledge they gain, and from delighting in their small idiosyncrasies, such as Phil Harding’s colorful language and Mick Aston’s colorful sweaters.

I find similar joy reading the poems in Travelers Leaving for the City, Ed Skoog’s fourth book. These poems investigate the past, but they rarely reveal a crystalized understanding of it. Rather, they move between time and place and subject and syntax to form a holistic picture. It’s never enough to know the full history, but it’s enough to get a powerful sense of it. “Clouds are in a composition useful / to fill space around the invisible,” we read in “Pittsburgh.” The clouds in this collection are memories of concerts in New Orleans, cello rehearsals, of nights in various hotels across the country.

The invisible, then, is the cause and effect of the 1955 murder of the author’s maternal grandfather in a Pittsburgh hotel. The book opens with a news clipping of that event, and several poems explore it directly. But while deeply personal, the murder is also distant, happening long before the author’s own birth, and its precise effects are difficult to deduce. The speaker admits, toward the end of “Tarantella,”

But that absence itself is cause for inspection. “I don’t think I can help you / up from the hallway floor with song” the speaker says to the grandfather in “Friendship Avenue.” It’s a conflicted and familiar longing that dominates many of the poems here: a desire to know the past at odds with a power to reformulate it through art. That sense is perhaps best captured in the simile at the end of “Unfinishable Sentences.”

and yet how the past
sticks out
like a banjo’s fifth string
rude and pitched
higher and on the wrong
side, the insistent note
out of sequence, but if
you like it you need it

And there is a rumored sixth
string, invisible

What separates poetry from archaeology is belief in that sixth string, and many reformulations here are played upon it.  “What if / I am the shooter again / rustling up the stairs,” the speaker asks at the outset of “The Lang Hotel.” The poem wends through a dream (and perhaps begins with one) and, despite attempts to make sense of the grandfather’s murder, ends in resignation to the limits of understanding: “again ask me / what I’m sure of…//a frolic in the lawn.” The imagined present capacity for violence with which that poem begins is found elsewhere. “Timothy McVeigh at the Dreamland Hotel” modulates between pronouns—an “I,” a “You” and a He” in the first four lines, with no antecedents but the title—and in that way and in others (“this sentence has a fuse”) blurs the distinction between reader and poet and subject. By the end I hope that all three of us may “step / toward the beautiful cowardices of love,” though I know one didn’t, irrevocably, while the others surely have, at least by reasonable comparison.

To paraphrase Daffy Duck, such pronoun trouble can effectively shift a target. “Hostilities” moves between the first and second person just enough to suggest the speaker is in fact addressing himself. “I used to go to group / cello lessons / at the local college” the speaker tells us. But the poem ends:

But who are you get out of here

So the hostilities are both internal and external all at once, the ambiguity deliberate. And shifting pronouns are only one linguistic technique among several that move ideas through the collection. Wordplay and association are satisfying to follow, like dusting off the links of a buried broken necklace. Quarry leads to query, Rabbit leads to rabbet joint, the Pennsylvania Tarentum of his mother’s birth leads to the ancient Roman Tarentum of Horace’s odes. At times, poems seem driven principally by sound, as in “Slender the Residence of Immensity”:

The thrush shods.
The peacock packs a peach in the possible parenthesis.
Heavyweight, the hearse crutches close
the gazelles are enjoined. Extraordinary.
Such scrollwork from such eyeteeth.

Hey Travis I’m at some bar in the Mission
by myself and remembering last winter
what we saw in Montana, stopped for gas
as the first snow fell and we had to
go around the mountains

The alliterative momentum in the first stanza above (and in the preceding four of the poem) creates a sense of the mind at work, though not at ease. The shift to the comparatively cogent narrative in the subsequent stanza here empowers the memory not just to hold the past, but to slow down and organize the present. I discern it in the speaker; I feel it as a reader. It’s a rewarding effect.

My reading is rewarded by digging outside the pages, too. I feel a bit of appreciative empathy to learn that W. Eugene Smith, whose photography is referenced in “Pittsburgh” and responded to in “Friendship Avenue,” is, like the poet, originally from Kansas. And it feels like I’m in on a joke to know, when Porky Pig shows up in “The Portland Water,” that Mel Blanc, the voice of Porky Pig as well as Daffy Duck and Bugs Bunny, got his start on Portland Radio, the city where the poet currently resides. This reading activity feels in line with the activity of the poet as he reads the past and the world around him. I can’t prove intent one way or another, but I enjoy the search.

That searching activity, that need to attempt sensemaking, even when it feels incomplete, is what, I believe, the book ultimately hopes to communicate and encourage. The past and its effects can never be fully understood. But inspection of it, whatever its result, shapes our lives. Some of my favorite poems in the book explore the speaker’s relationship with his son, which bring together the past and the specter of murder, the present and the poet’s self-doubts, and the future in which the poet no longer exists. “My son likes to stay in hotels / because they have great pools,” we’re told in “The Iron.” “But what I like is ironing a shirt…what I feel in those moments / is both anonymous and myself.” Here Skoog revels in the in-between, not in the wrinkled shirt or the pressed one, but the moment when it’s neither or both. It’s only a moment between ends, though, like the span of a human life itself, and he knows it. Best to live that life on one’s own terms:

…my son,
back from the swimming pool, says
if you die wearing glasses
your ghost will wear glasses.
I like to take off my glasses entering,
then go to the window and look out. 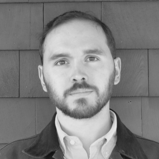 Michael Pontacoloni’s poems appear in Cincinnati Review, Denver Quarterly, Copper Nickel, Pleiades, and elsewhere. He has received scholarships and fellowships from the Sewanee Writers Conference, the Vermont Studio Center, and the University of North Carolina at Greensboro. He lives in Oxford, Mississippi. Find him on twitter @mike__pont.