Adrienne Su is the author of five books of poems: Peach State (Pitt, 2021), Living Quarters (Manic D Press, 2015), Having None of It (Manic D, 2009), Sanctuary (Manic D, 2006), and Middle Kingdom (Alice James Books, 1997). Her work has been recognized by fellowships from the Barbara Deming Fund and the National Endowment for the Arts, as well as several appearances in Best American Poetry. She teaches at Dickinson College.

Elizabeth Marie Bolaños: Peach State is ripe with food’s connection to your identity, a theme that lives in much of your previous work too. Have you ever created a meal solely inspired by a special moment in your life?

Adrienne Su: There was a time when I put together abundant meals, often with unfamiliar recipes, on the slightest pretext, for fun: in graduate school and other “starving artist” circumstances, I was always having dinner parties. Then one day, all at once, I had a full-time teaching job and a newborn. Holiday meals and birthday cakes had no leeway for disasters, so for officially “special” days when my children were very young, I favored the tried and true. Still, it wasn’t long before even they were up for trying something new, such as a birthday cake piled with homemade marshmallows (I can’t take credit for that recipe). In any case, time-management challenges have taught me, more generally, not to be over-invested in how things turn out. Some of the most joyful and imaginative cooking arises from making what you can from what happens to be on hand. Homemade pizza does this well, as you can make a smattering of vegetable bits, leftover meat, cured things from jars (artichokes, olives), and odds and ends of cheese into a dinner that looks and tastes intentional. Cooking and writing are similar in this way: it goes best when you’re not under pressure to perform; if you practice enough, once you let go of the idealized result, it takes off.

EB: You explore food in layers that feel tangible, as if each poem is edible with its own unique flavors. I felt the bittersweet ones lingered with me the longest. Do you ever feel this way when writing, as if you’re composing a meal?

AS: I appreciate this notion of eating the poem, with bitter and sweet balancing each other out. You’ve reminded me of the many ways writing parallels the composition of a meal, where you need a balance of flavors, textures, colors, boldness, and neutrality, and it all has to make nutritional sense. Most home cooks have inadvertently produced a beige dinner―mashed potatoes, broiled cod, and steamed cauliflower―that’s perfectly nourishing and even delicious but visually comic, a little off-putting. You don’t go back and revise the meal―you laugh and have dinner and that’s the end of it. In writing, you not only get to revise, you have to, because that poem may be served over and over to who knows how many people. There probably is some synesthesia to revising, an intuitive moment when the poem generates, for instance, the right color, texture, heat level (in temperature or spice), or feeling of having had a good meal. Pulling the poem into its finished shape is like identifying the missing element for a salad: the orange pepper or pickled onion or slivered pear that meets not only a flavor, smell, or texture requirement but also a visual one, because eating, when you pay attention, is an aesthetic experience as well as a functional one.

EB: I love the line “Our story began when my parents arrived as immigrants,” from the poem “Personal History.” Was the idea for the book inside you for a while, brought upon gradually, suddenly?

AS: Miraculously, it was there, waiting for me to find it. Once I identified it, by writing a sabbatical proposal, a gate opened. I had a better perspective on my previous poems as well; they had been circling this book without my explicit knowledge. Of course, the actual writing still took a long time, and assembling the final manuscript was the same struggle it always is, but I could see parts of the whole coming together sooner than with previous books.

EB: Did you visit Georgia while creating this collection? Or do any traveling for that matter?

AS: Whenever I could. It was in large part to see my parents and other relatives, but every visit also renewed my perspective on early experiences and helped me imagine my parents’ lives there before I was born. As a teenager, I sometimes resented that our restaurant-going skewed so heavily Chinese, when restaurants of all kinds were opening in Atlanta. I wanted to try the foods of more countries. But my maternal grandparents were living in Atlanta then, and while they loved a good steakhouse, they often chose the restaurant for us all. My grandfather was effusive about food in a way that perhaps shows up in my voice on the page; he loved to narrate, like a sportscaster, as dishes arrived, and photographed the food, long before photo-taking became free and easy. Returning to that landscape, where the restaurants have multiplied and attracted national attention, prompts me to remember and imagine. I’m speaking in terms of when I was writing the book. Today, after over a year without travel and with immense challenges for restaurants, I worry about how that landscape will look when I can visit again. As background work for Peach State, my mother and I would occasionally drive by the shell of a closed restaurant we used to frequent as a family. One day we parked in front of one of the oldest, of which I had only a vague visual memory, and tried to imagine the modest building―it had become a Thai restaurant―in its old incarnation. I was so young in its day that without my mother, I wouldn’t have been able to find it. Other trips included New York, where I visited food exhibits at the Museum of Chinese in America and the Museum of Food and Drink, and San Francisco, where I was doing readings from Living Quarters but also took the chance to see family friends, who shared some of the early scenarios in Peach State.

EB: One of my favorite poems is “When I Said I Grew Up Speaking No Chinese, I Was Forgetting These Words.” Can you tell me a little about the process for creating this one?

AS: Thank you for liking it! Much of the background work for Peach State involved immersion in cookbooks, many of which were quirkily indexed. Browsing them was great, but when I wanted to look up something specific, dishes and ingredients became elusive, even in some books with rigorous indexing. I realized that I had never known what certain foods were called, or I had learned only an approximate name for them. Regionalisms, romanizations, and pronunciations―never mind translations―were all over the place, and it wasn’t just me: there was no consensus on what to call them. My own parents, who grew up speaking different dialects of Chinese, might each have a different name for the same food, and a family friend who grew up speaking yet another dialect might have still another name for it. As a result, some of the foods I was trying to remember were effectively hidden, even―sometimes especially―from an internet search. That even a person who grew up eating these foods (a poet whose medium is language) could not definitively name them gnawed at me. In childhood you trust that older generations can keep track but later realize that older generations won’t always be around.

EB: Some of the poems unearth racial issues which still poison society today, but you educate the ignorant through your lens of experience.

AS: It’s gratifying to hear this perspective. When writing, I’m suspicious of any desire on my part to educate, lest the poem turn out didactic, so I go into the process looking for something I need to learn. Yet I also feel an urgency about the racial issues you mention and think I would be dishonest not to engage with them.

EB: I love when you talk about food with personification. In the poem “Instant Ramen” for instance, instant ramen was mocked so you wanted to defend it, inform the mockers of its culinary potential.

AS: Thank you! I think the foods we associate with being nurtured as children―if we were fortunate enough to be nurtured―are never entirely inanimate, within our deepest selves. That’s one reason it can be so hard to give them up later, if advised to for health or environmental reasons. My hope is that “Instant Ramen” expresses something most people have felt, if not necessarily toward the same food.

EB: Were there any poems you made that you enjoyed but felt shouldn’t be included in this collection?

AS: Quite a few poems didn’t make the cut. Some were simply weaker than others; some covered the same territory in ways that didn’t add enough; others turned out not to fit. Writing those poems wasn’t a waste though: I think of them as part of the drafting process for the book. Only after I started repeating myself could I be sure I’d said all that needed saying; taking redundant poems out is easier than creating missing ones to order. The drawback is that working this way is time-intensive, in a world in which writing time is scarce for all but a very few. Occasionally I write a poem that I later decide shouldn’t be published in case it hurts someone, but that’s a disappointment. I write to connect with readers and to participate in the conversation among poets.

EB: Is there a poem here you feel especially close to? A heart of the collection maybe? I felt a sense of this in “My Life in Peaches.”

AS: This is a terrific question. I haven’t previously thought of the poems in this way. I might point to the final poem, “An Hour Later, You’re Hungry Again,” as reflective of a family ritual that, while it’s situated in childhood, speaks to every stage of life and could include everyone in my extended family. It also captures the connection between family and restaurants for many Chinese Americans. But “My Life in Peaches” is more of a distillation of the book, since it invokes images and ideas that occur throughout Peach State: suburban grocery stores, the city of Atlanta, the state of Georgia, car culture, Chinese art objects, traditional Southern food, immigrant thrift. It may also be a poem that doesn’t stand alone as much as others, as it’s so enmeshed in conversation with the rest of the book. In that sense, it may well be the heart. 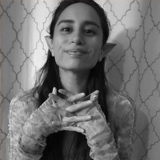 Elizabeth Marie Bolaños graduated virtually from Fresno State’s MFA program in the Spring of 2020. She’s a budding artist who enjoys experimenting with hybridity, binging anime, and too much fan fiction. If not lost in such, she’s probably reading to ghosts or on Instagram @elizabethmariebolanos. She’s grateful to have publications in Clash Books, Nymphs, and Eris & Eros, among others.