John Milton’s distinguished epic poem, Paradise Lost, follows two narrative arcs. It details Satan’s scheme to travel to Earth in order to corrupt humankind and Adam’s and Eve’s slippage from God’s good graces as they experience guilt and shame for the first time, post-Garden of Eden incident. Paradise Lost begins after Satan and his followers have been defeated by the Archangel Michael’s army in the war for heaven and banished to hell.

A similar stage is set in Sometimes I Never Suffered, Shane McCrae’s most recent collection of poetry. The book boasts two main characters: “the hastily assembled angel,” who is hurriedly produced by heaven’s angels after they learn of God’s intention to create humans, and Jim Limber, a boy of mixed Black and white descent who lived with Jefferson and Varina Davis for a year until they were separated when the Union army captured Richmond, Virginia in 1865. Over five sections, McCrae masterfully narrows in on the blurry distinction between life and death, the harrowing act of witness, and the presence of heaven on earth.

Sometimes I Never Suffered, like Milton’s work, commences in media res with a single poem from Jim Limber’s perspective and leads with the powerful line, “I’ve been a long time dead without my life.” The work presents an immediate contradiction: presumably when we are dead, we are by definition without life. There is no overlap between the two as general consensus would have it, so the modifier seems unnecessary. Jim Limber suggests that his soul was dead while he was still alive because of the brutality and suffering that defined his life, making it equivalent to or worse than death. This line also underscores the title of the collection, given that the phrase “Sometimes I Never Suffered” contains a parallel turmoil; were there discernible moments during which Jim Limber did not suffer at all, or was he ideating versions of existence that did not include suffering, possibly in dreams? McCrae’s talent is his ability to construe that multiple truths can comfortably coexist on the same plane without making one another any less true, even when they appear to be mutually exclusive—a position that permeates Sometimes I Never Suffered.

The collection moves into the first section, “I. Fresh Eyes for a Fresh World,” and quickly establishes the hastily assembled angel as a risk management measure taken by his fellow angels in heaven. The hastily assembled angel is bound for earth, saddled with the task of keeping watch over the world, but rather than falling from heaven like Lucifer, the angel is “shoved” by his associates. Throughout the remainder of the section, the angel bears witness to all of human history while deeply pondering his own proximity and relationship to God. Able to see through time, he beholds the great violence and despair that humans are capable of inflicting upon one another, and yet he is drawn to their propensity for making mistakes. As he perches above the world, he thinks to himself that “he must be more like God than people are / Especially because he like God can’t / Choose to be less like God.” This line begs a central question of the work’s project: does the price of perfection and moral authority result in a subsequent loss of autonomy?

Despite the markedly biblical content of the collection, McCrae makes it clear that we are not reading the Bible, or Milton, or Dante. He interjects his poems with miniscule “glitches” that present themselves through imagery and form, such as out-of-place objects, missing or misplaced words, and blank spaces abruptly inserted at inopportune points in phrases and new lines. For example, as the hastily assembled angel observes the Battle of Jericho, he perches himself on a metal folding chair—an image so unbecoming that it brings in a comedic effect. Why would any of heaven’s angels settle for a metal folding chair rather than, say, a cloud, or something slightly more ethereal? McCrae inserts other minor grammar choices, subtle enough that they could easily be glossed over but are undoubtedly utilized with a purpose. At one juncture, McCrae writes, “The disappointment angel flies so close.” At first, we may read this as, “the disappointing angel,” but the formal decision to use “disappointment” as an adjective opens up the possibility that the angel was bred as a disappointment through or by someone else (God?). These small quandaries continuously pop up throughout the collection and contest the idea that perfection is a desirable model, in heaven or in poems.

Watching the Israelites fight for their freedom, the angel wonders where he heard the saying, “In the midst of life we are in death.” The notion that intense suffering mars the distinction between life and death is revisited extensively in the middle three sections of the collection, which are delivered by Jim Limber. Louis MacNeice’s voice echoes on the pages separating these sections: “If you want to die you will have to pay for it.”

And pay for it Jim does. When he enters Sometimes I Never Suffered, he has already died and entered heaven, a place he has discovered is riddled with the same racism he experienced while on earth. As Jim recounts his arrival at the gates of heaven, he admits, “I was already dead / And had been dead some time” but that he had expected his situation to change once he made it inside:

Having been taught in life that being Black held no value, Jim assumed he would become white once entering heaven, and he was mistaken. He instead describes how the white people in heaven “just don’t talk to [him]” and are even given blindfolds that erase Blackness altogether. Jim realizes that, like on earth, white people in heaven do not hold a sense of awareness or urgency because they are inherently protected. For the Black inhabitants, “heaven is when they kill you in their homes.”

McCrae weaves together lines in his poems in a manner that is both controlled and disorderly, occasionally leaving out clauses altogether or ending poems mid-sentence. This unpredictable rhythm drapes his language in opacity and plays the collection out like a dream sequence. In “Old Times There,” a poem that is written as a script to a play, Jim Limber communicates with Jefferson Davis, who is trapped in a demon-induced nightmare and unaware that he is in Hell. Jim explains to Davis that while it may feel as though he is alive, he’s merely being made to believe that. Jim himself is asleep during this interaction, inviting the reader to ruminate on the supposed divide between dream-state and consciousness, suffering and peace, and morality and sin. In the final section, the hastily assembled angel builds a ladder to heaven with seven rungs in an act closely following God’s creation of the world. The angel falls asleep on the seventh rung and dreams he wrestles with the sky, or whoever is behind it. Though the relationship between dreams and reality has been ambiguous in the work, this scene demonstrates that dreams, while otherworldly, can be sites of action and drivers of hope.

One of the collection’s most impressive feats is its capacity to infuse divinity in every subject it touches. The hastily assembled angel observes that “One thing was like another thing and that / Thing like another everything” and correspondingly, that “In every speck its origin whole he sees in / One speck of skin.” Through watching the world and humankind, the angel comes to the conclusion that we are all parts of the same whole—the same creation. When Jim Limber describes the absence of “bad” memories at heaven’s gates, he claims, “It’s nothing      there but light white light but al- / so orange light     green light and blue light.” The book’s cover rapidly comes to mind; it’s an image of a Black child covered with vibrant and electrifying specks of light. His is undoubtedly a heavenly body, as all bodies are.

As the hastily assembled angel rises from his tumultuous slumber on the seventh rung, he leaves behind “The life” he cultivated there and steps off the ladder into heaven. Many of the characters in Shane McCrae’s writing encounter violence and suffering, but, notedly, they are never lacking in hopes or dreams or unmistakable exhilaration. Jim Limber’s version of heaven is one that is fundamentally broken and yet teeming with personal choice, with the possibility of “the whole sky and stars”; he divulges to the reader that what he has learned since being there is that “Heaven ain’t you running but you staying.” Sometimes I Never Suffered examines the unique freedom that results when there is a reckoning with “the duties owed to love” and when heaven is infused into all there is. 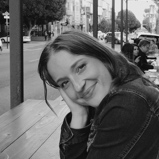 Tryn Brown is a writer based in San Francisco, CA. Her work has been featured in Split Lip Magazine, Sidereal Magazine, Wrongdoing Magazine, and others. You can find her on Twitter @themeasures.