Rarely does a book of poems begin with a villanelle, that closed, taut form obsessively recycling its refrains. Yet Erin Belieu, in Come-Hither Honeycomb, dares to open with one. The two repeated lines in “Instructions for the Hostage” are a set of psychological guardrails for a speaker who seems to be addressing herself: “You must accept the door is never shut,” and “though the hostage will remain, no matter what.” In the poem the speaker sounds like she’s trapped in the cell of her own mind, while her body stands nearby, paralyzed. The door to the room that imprisons her always appears open, and yet the figure can’t take whatever heroic (or perhaps meager) steps necessary toward freedom. The poem functions as a sort of thought experiment conducted on the self—or rather on someone who is convinced she is her own worst enemy.

By the time we reach the final quatrain, in which the villanelle’s two refrains compress to create new meaning as well as closure, the poem’s rhetoric won’t allow it. Or rather, we get closure but not the closure we expect. “Blink once for yes, and twice for yes—the heart / makes a signal for the willing, its purity sublime. / You must accept the door is never shut, / though the hostage will remain no matter what.” For Belieu the self-doubter and self-deprecator, for Belieu the humorist, the default mode of consciousness is a trap—or at least a paradox in which the speaker must remain speechless (“Blink once for yes, and twice for yes”).

Opening with such a poem is a strategic success for a book so dedicated to longing and a reckoning with the past, even if all the poems that follow “Instructions for the Hostage” operate in loose, conversational modes. Come-Hither Honeycomb is Belieu’s fifth collection and her most reflective and meditative. In “As for the Heart,” she writes,

I am come to the age
of pondering my lastness:

buying what seems likely
my final winter coat at Macy’s,
or when a glossy magazine
(so very blithely)
asks me to renew.

This is the utterance of a poet who has reached the stage of life in which the feeling of renewal is hard to come by. And yet “As for the Heart” makes an understated claim on the future, with the heart personified as an “ever-pixilated / tweener,” surprisingly poised to test the passage of time. Cast as a female character, the heart occasionally carries a “clanging… tinny sound,” even though it knows youth has been spent. The poem goes on to cite the old, aging poets in the pantheon who have taught us that life “grows sweeter” with age. Moments later Belieu delivers one of her signature moves; she likes to undermine anything serious, sentimental, or arch-poetic with a comic statement or moment. In this poem her son suddenly enters the scene “scarfing bucatini from a crazed pink china bowl. // Shiny kvetching creature.” The contrast between brooding mom and clueless son undermines the epic notion of sweetness as a characteristic of middle age. The poem ends wistfully, “There’s one barbed weed / pushing up greenly through / my scruffy loropetalum. // And it falls on me, this little / cold rain the day has left.” That’s one extraordinary image, the pinprick sound and sense of “barbed weed… pushing up greenly through” giving way to the cold rain, a gentler, tactile reminder that aging is not for the faint of heart.

Belieu’s poems are often scathing self-takedowns that tackle topics spanning from screwed-up romances to foibles of everyday living. Over the course of her last three books, including Black Box (2006) and Slant Six (2014), Belieu has refined this persona, which would be perfect for a streaming sitcom or viral clip of epic fails. She comes off as smart, sexy, sarcastic, and self-deprecating. In Come-Hither Honeycomb, this figure shines most brightly in “Loser Bait.” Portraying herself as a “hapless nymph,” a nerd at a college library browsing Bulfinch’s Mythology and “minding / her own beeswax,” Belieu plays on the classic plot of the ingenue haplessly encountered by a male hero who leaps to the wrong (or maybe right as she later wonders) conclusion about her. The self-interrogation that follows is straight out of Belieu’s poetic playbook. She reveals:

For didn’t I supply
the tippy box, too?
Notch the stick on which
to prop it?

Didn’t I fumble the clove hitch
for the rope?
Leave the trip lying obvious
in the tall, buggy grass?

Ever it was.
Duh.

Belieu perceives her youth as both anecdotal and epic, a neat trick. I doubt she’d resist the notion that the final line in this passage, “Duh,” embodies a whole ethos. Like the gods and goddesses, like the characters in those classic narratives (in this poem Belieu references the story of Narcissus), fate—her fate—feels inscribed. Throughout the poem, we at first assign “loserhood” to the speaker who is only partially unaware of the effect she might have on the men who notice her. The poem’s last sweep, however, turns the tables on that notion. In fact, the so-called hero (in this poem a “layabout youth” or “rapey God”) is the consummate loser motivated by his own vanity and disdain for others. In this regard, everyone from Zeus to Humbert Humbert to Harvey Weinstein fills Belieu’s definition for loser. Add to that any frat boy or randy prof aimlessly wandering through a college library. Because Belieu comically reimagines herself with at least some degree of agency as a metaphorical bait trap, the poem confronts us with a nuanced conflict rather than a one-dimensional, hash-tagged diatribe.

To my mind the most skillfully executed and moving poem in Come-Hither Honeycomb is its last, a seemingly effortless 6 ½ pager, written in the third person, that reads as another self-portrait. “She Returns to the Water” features a middle-aged woman skinny-dipping illicitly in her landlord’s pool. It’s 3am. She’s alone. And while floating in the glimmering pool she’s…

trying to recall
the exact last
moment of her girlhood

where she was, what she was doing – when she finally
learned what she’d
been taught: to hate

this fleshy sack
of boring anecdotes
and moles she’s lived

inside so long,
nemesis without
a zipper for escape.

The poem is one of the few meditations in Come-Hither Honeycomb aimed at self-forgiveness. Even though the spring of Belieu’s lifetime is long past, it can still be felt deeply in fugitive flashes. Maybe only a middle-aged poet can appreciate the pure longing and isolation expressed here, in which the speaker recalls herself in a moment of “no fear, no notion // of self-preservation,” when her body was lyrically gorgeous, lithe, and athletic enough to turn in a perfect performance at a high school high diving competition, a discrete memory the poem later mines. There are many lives that you could lead, but there’s only the one that you live. With both wit and grace, Belieu has mastered the art of stumbling toward that reality. 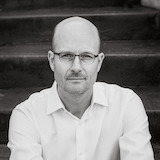 David Roderick is the Director of Content at The Adroit Journal and was recently named an NEA Creative Writing Fellow for 2021-2022. He is the author of Blue Colonial and The Americans. In Berkeley, California he co-directs Left Margin LIT, a creative writing center and work space for writers.