It would be easy to view Dana Roeser’s All Transparent Things Need Thundershirts (Two Sylvias Press, 2019) as an amuse bouche, if you weren’t really hungry. After all, it is in part an hilarious romp, with setups such as in “Letter to Dr. M.,”

seriously your admonition
not to go running

or in “My Hobby Needed a Hobby,”

But you would be wrong to take this book lightly, as it is largely a lament, ready to catch you off-guard when you confront, for example, this rant in “Cindy from Marzahn on the Night of the Mayan Apocalypse,”

life after
the apocalypse—
of disappointment,
unemployment, knee
blowout, back
kink, aged out
obsolescence
irrelevance,
almost
unbearable worry
about my
children,
etc.

Roeser is a consummate storyteller; her voice rivals the best standup comics. And here is where her foremost talent lies: she is able, under the worst of circumstances, to follow a narrative stream down many tributaries, in which humor, or distraction, or memory softens (or at times heightens) the blow. In an interview with Kristina Marie Darling at Kenyon Review, Roeser says, “I like velocity in poems. To me, to stop and dwell is to risk curdling. […] My restlessness is not necessarily a virtue (and can be annoying, I am certain), but it helps me to be honest, to have an honest relationship with my reader and with myself.”

While not narrating her personal life story in her poems, Roeser readily acknowledges that she uses her life as backdrop, and at times, foreground. In an interview with Megan Denton Ray at Sycamore Review, she says, “I don’t feel that the ‘I’ in my poems is necessarily me.” She does, however, acknowledge using the names of her spouse, daughters, and friends in poems which reflect actual events. When asked how she manages to negotiate using the real names of her family members, Roeser says, “Either you view your life experience as material, or you don’t. Either you’re looking at it as an artist, or you aren’t.”

Fiction or nonfiction, Roeser is immensely creative and talented as a poet. Her language is always conversational and intimate, yet so natural sounding that her seamless skill with imagery might be overlooked. In the poem, “Crush,” which is an end-of-life portrayal of the speaker’s father, she repeats the phase, “The day room gets afternoon sun,” a number of time, as “Grief suffuses the place / especially at night.” The poem ends with these lines,

This is the last

night of my dad’s lunatic demands. He
wants a grape. He wants to go to the

library in the residence and read The
Economist. He wants his old life—

and his old routine—back. They put him into
his pressed red-checked shirt. The day room

gets afternoon sun. I am crushed
by its beauty.

I find Roeser’s work so creative that I was surprised to discover that she didn’t make up the word “Thundershirt.” It’s actually a trade name for a “dog anxiety wrap” that is “designed to provide gentle, constant pressure to your dog’s body, producing a calming effect.” Of course—I nodded as I read the ad—all transparent things do need thundershirts. Roeser has the uncanny ability to clothe her words with gentle pressure, while remaining totally transparent and vulnerable. In the poem, “Transparent Things, God-Sized Hole,” which begins with the book’s title line, Roeser’s speaker segues into her own fears and anxieties:

I told Patti last night
that the God-sized
hole in me was
so big and vacant
voracious and spacious
it was like I was
running some kind
of desperate toddler’s
shape-sorter game, trying to find
something that fit
to plug into it.

The edge to using life stories in poems is sharp—step over it and you are writing memoir, or creative nonfiction. We can’t accuse Roeser of that. Her craft is uniquely hers: the use of very short lines in very long poems combined with an every-other-line indented form that keeps the reader’s eyes moving along at a pace not unlike a marathon or a whirlwind. 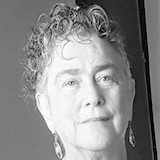 Risa Denenberg lives on the Olympic peninsula in Washington state where she works as a nurse practitioner. She is a co-founder of Headmistress Press and the curator at The Poetry Café Online. She has published seven collections of poetry, most recently the full-length collection, slight faith (MoonPath Press, 2018) and the chapbook, Posthuman, finalist in the Floating Bridge 2020 chapbook competition.