Every culture has traditional stories, and every family has its lore. We depend on these narratives to make meaning, but there are times in our lives when we call on those stories with a greater desperation, particularly when faced with tragedy. This is the state of affairs in Jennifer Givhan’s new poetry collection, Rosa’s Einstein (University of Arizona); disaster looms in the air in the form of the atomic bomb, but also in the form of more intimate losses. What’s truly magical about this collection is how Givhan brings the science underlying nuclear technology into the magical world of myth and fairytale. What her approach uncovers is their mutual uncertainty, what Albert Einstein might have called “spooky action at a distance”—a phrase he used to describe that which is real, but unbelievable. In Rosa’s Einstein, what’s imagined is more believable, more present in many ways, than what we name reality.

To enter the strange alchemy of Rosa’s Einstein, we could start in any number of places, but perhaps the most useful place to begin is with Los Alamos, with the Trinity Project and the invention of the atomic bomb. Its violence haunts these pages, and in “Field Trip: Lieserl Blanketed in Fallout, or Nieve,” Rosa, Givhan’s reinvention of Rose Red and Lieserl, Einstein’s missing daughter, venture into the mythos of that day:

At the nuclear museum we watched the Trinity test
the day the sun rose twice:

Nieve appeared in the mushroom cloud
above our rancho.

That’s what I called her. I renamed her
Nieve, my Good Sister, favored one.

Sometimes, we pretend the extra limbs
are here to comfort us, snow-white

branches growing from our sheets
like snowflake arms in sixfold radial symmetry.

Nothing’s so fragile, so perfectly shaped, as melting.

This is readers’ first introduction to the three girls who populate the book—Rosa, Lieserl, and finally Nieve, who is Givhan’s version of Snow White, Rose Red’s counterpart from the Brothers Grimm fairytale. But the poem also reveals the tenuousness of reality. Nieve appears in the mushroom cloud, not quite real, an extension of the poem’s opening line, “I thought Lieserl knew it was pretend.”

For Rosa, Nieve is both real and unreal, the necessary Good Sister, and her counterpart in the sideshow, but she is also no more than a vision, and the rest of the poems struggle to reconcile this contradiction. Like Heisenberg’s uncertainty principle, there is a limit to what Rosa, and by extension the reader, can know. Sometimes what we believe is a matter of hope more than fact.

As is quickly made clear by Givhan’s choice of epigraphs, which include a quote from the article “Time Bandits: What Were Einstein & Gödel Talking About?” and The Brothers Grimm, Rosa’s Einstein is fascinated by the way in which science and myth both work to produce systems of belief, and there are two poems in the collection that take up this issue directly. In “Why Believe? Or, Rosa Questions the Scientist About the Princess,” Givhan introduces a science experiment in which children have been told that an invisible person named Princess Alice is watching them. The studies reveal that children who were told about Princess Alice were less likely to cheat on tasks during the experiment than those who were not presented with such a fiction. But for Rosa, Princess Alice serves as the foundation to interrogate belief more broadly. What happens when a scientist encounters something beyond belief?

He wasn’t watching for signs.
He didn’t believe in that. A scientist
believes only the data. & only as long
as it can be reproduced.

Still, she came in the form of wind chimes
On the back porch where there was no wind.
There must have been wind, I said –
once I’d finally figured it all out

or at least once I’d thought I had.
No, it was a windless evening.

The only answer to these unproveable signs: Princess Alice. The scientist, the poem tells us, is filled with grief, and that seems to have provoked a new need within him, in the same way that we all require stories. As Brian Boyd explains in On The Origin Of Stories: Evolution, Cognition, and Fiction, a story is a “thing that does” as opposed to a “thing that is.” And what it does? Among other things, stories help up explore themes of survival, cooperation, and justice, and they explain the otherwise unknowable. Stories give us the tools we need to navigate conflicts in our own lives and to seek more and better for ourselves and those who come after us.

This understanding of stories gives us fresh eyes with which to explore traditional myths. In “Night After Night: Jupiter,” Givhan’s speaker tells us how the myth of Skoll the wolf god was used to explain the phenomenon of a solar eclipse before people understood the scientific foundation. But what happens when we understand the science? The poem tells us clearly, “I know the science of eclipse / but still I need the wolf.” The science is not enough to explain wonder or fear, the disappearance of the sun, or the loss of a beloved. We require something deeper, and that’s why stories remain so critical.

Described as having “braided her mama’s history like myth / into her ribboned hair,” Rosa is, in many ways, all of us as we attempt to make sense of our place in the world. But she is also a particular kind of hero, and Givhan points to that fact from the first moment with her dedication. Rosa’s Einstein is dedicated to her daughter “Adelina Suzanne & all las hijas wandering their own deserts,” and she caps the book with a similar reminder in the final long poem, “Rosa & Nieve in the Beginning.” Here the shared voice of Nieve and Rosa tells us that:

When I was young, my white grandma gave me
a book of famous women, women who’d done something –

it took many years before I noticed not one of those women
was Latina. I decided then I would be a poet.

Speaking to the lack of Latinx representation in both the arts and sciences, the poem calls back to a formative moment and what happens when we don’t see ourselves represented in the stories that surround us. Rosa and Nieve are a way of displacing the white girls that populate the old Disney stories and the European settings transposed to the American Southwest, but they’re also more than princesses. They are scientists and conjurers and artists, time travelers and explorers writing their own story.

As an epigraph to the poem “Ghost You Don’t Believe In,” Givhan chooses the Richard Feynman quote, “The world looks so different after learning science,” but that’s not the only time the world is transformed. The world looks different when we realize we aren’t represented, and it’s transformed again when we discover ourselves in stories. With Rosa’s Einstein, then, Jennifer Givhan offers so many young girls a gift, but she also offers up her unmatched alchemy of science-meets-storytelling to adult women reading from minority positions.

We need stories that include us in order to create meaning, and our access to science doesn’t nullify that fact. So let me say—after reading Rosa’s Einstein the world looks different. Extraordinary poetry transforms the world as much as any new scientific discovery. Embrace the “spooky action at a distance,” the reality that seems like fiction, the unfathomable truth of our own lives and how stories and poems carry that truth to us. 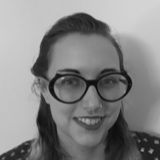 Allison Bird Treacy is a poet, literary critic, and unlikely Sunday School lady. Her work has appeared in Pleiades, Sinister Wisdom, and Gigantic Sequins, among other venues. Bird lives with her wife and too many cats in Boston, MA.